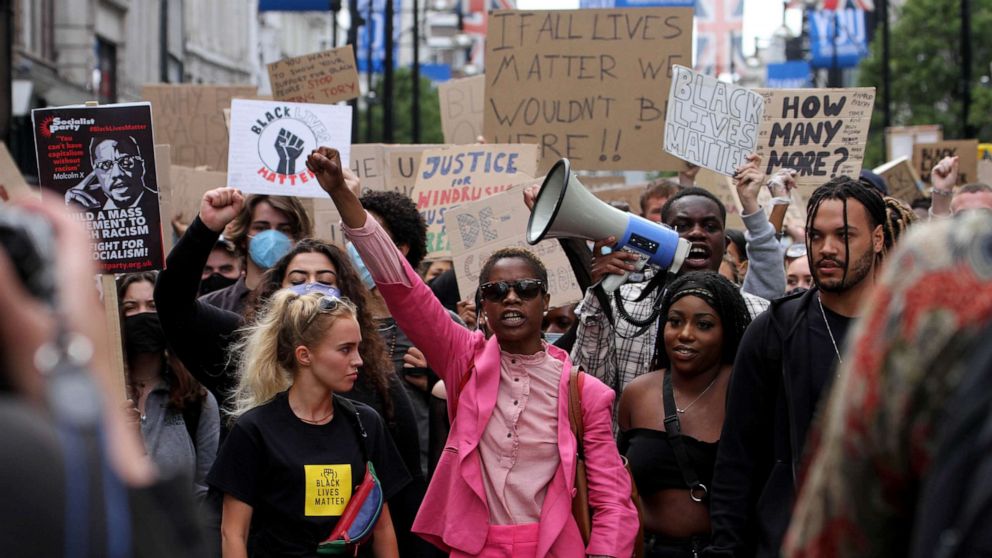 This report is part of “Turning Point,” a groundbreaking month-long series by ABC News examining the racial reckoning sweeping the United States and exploring whether it can lead to lasting reconciliation.

LONDON — The summer of protests following the death of George Floyd in Minneapolis was not confined to the United States. Demonstrations featuring placards emblazoned with Floyd’s face and his last words, “I can’t breathe,” spread to Canada and Brazil, to Europe, and even as far as Australia.

Yet the protesters weren’t merely demonstrating in solidarity with their U.S. counterparts. They turned inward — looking at their own countries’ histories of racial violence, the present state of systemic racism, and police brutality.

How far these protests have impacted the nature of policing and the understanding of racism in Europe is a matter of debate, but the visibility and depth of the protests were undeniable in a continent that, in the words of one commentator, “offshored its slavery and colonialism” to the U.S.

The nature of policing

The deaths of George Floyd, Breonna Taylor and other Black citizens at the hands of the police this year once again threw into sharp focus the United States’ long history of police brutality. Elsewhere in the world, particularly in the U.K. and France, recognition of the deaths of Black people in confrontations with the police was a prominent feature of the Black Lives Matter movement, which is not directly linked to the U.S. equivalent.

“I think it’s been an astonishing year, an astonishing summer, for a massive increase in anger at police all over the world,” Lawrence Sherman, criminologist and director of Cambridge University’s Center for Evidence Based Policing, told ABC News.

Yet, in terms of scale, tactics and accountability measures, police violence in the U.S. is “enormously different” than in other advanced democracies, according to Sherman.

Crucial to that disparity, according to Sherman, is not just the fact that many other national police are not armed — but that the populations aren’t either. There are an estimated 270 million civilian firearms in the U.S., which amounts to 89 firearms per 100 residents, according to the Small Arms Survey. In contrast, there are only 30 civilian firearms per 100 residents in Germany, the highest number among countries in the European Union, and just six guns per 100 people in England and Wales.

“Gun ownership is a huge factor,” Sherman said. “And it differentiates the American police not only from Britain, where the police are unarmed, but from the rest of Europe where they all carry guns. But they never shoot anybody relative to U.S. numbers. So, why don’t they shoot anybody? Because the population is largely unarmed.”

Despite that difference, recent polls published after the death of Floyd suggest that even if the scale of fatal violence is not comparable, racism in the police is a very real and pressing issue. The anti-racism charity Hope Not Hate published poll findings in August that found 80% of Black Britons said that “police are biased against people from my background,” with 65% of all ethnic minorities agreeing with the statement.

The racial breakdown of law enforcement and representation in the criminal justice system in the U.K. is broadly similar to that in the United States. Black people in the U.K. are nine times more likely to be stopped and searched by the police than white people, which the Equality and Human Rights commission attributes to “racial discrimination.” In the U.K., Black, Asian and minority ethnic (BAME) residents make up 25% of the adult prison population and 40% of the youth custody population, despite comprising 14% of the overall population. And although there are relatively few deaths at the hands of police, in confrontations with the police where force is used, BAME individuals are two times more likely to die than white people.

“The relationship between Black people here and Black people with American police is identical,” Kehinde Andrews, professor of Black studies at Birmingham City University, told ABC News. “There’s as much antipathy, distrust. And for good reason. There’s the same problems — it’s just not as violent.”

There is, however, a marked difference in the levels of accountability between British and American police, at least on a legal level. Enshrined in the European Convention on Human Rights, an international treaty with 47 state signatories, is a “duty to investigate all suspicious deaths” at the hands of state agents.

Each time serious injury or death in police custody occurs in the U.K., Sherman said, police forces refer themselves to the Independent Office of Police Conduct, a watchdog which has the power to take over internal investigations. In the U.S., on the other hand, such reviews are often “internal matters” for police departments.

Since 1856, Her Majesty’s Inspectorate of Constabulary in the U.K. has had the power to “defund” malfunctioning police departments, and the establishment of an equivalent entity in the U.S. could drastically change accountability, Sherman said.

“The remarkable thing about the regulatory process in the U.S. is that it’s heavily driven by individual lawyers going to court, and that’s how the information came out in Rochester [with the death of Daniel Prude],” he said. “But in principle the state could give an inspector general of the police [the power] to go in in the wake of any such event … and the power to decertify all those officers after a review.”

A reckoning with history

This summer was by no means the first summer of European protests sparked by a police killing, even if in this instance the impetus came from abroad. The U.K., Andrews said, has a long history of “urban rebellion,” including the 2011 London riots sparked by the police shooting of Mark Duggan, and race riots in the London neighborhood of Brixton throughout the 1980s.

In France, the renewed scrutiny around Floyd’s death prompted protests to demand justice for Adama Traore, a 24-year-old Black man who died in police custody in 2016.

So does the U.K. have its equivalents to Breonna Taylor and George Floyd, names that are used to call for an end to racial injustice?

“Within Black Britain, there are a number of names that we do have in the same way,” Andrews said. “It probably hasn’t caught the mainstream attention as much … to be honest, the only real difference between these [2020] protests and all the protests in the U.K. over the past 50 years is that white people paid more attention.” The murder of Stephen Lawrence, a Black man killed in a racist attack in London in 1993, is perhaps the highest profile death of that kind, he said.

Both in the U.S. and Europe, images of Floyd and Taylor adorned many of the placards at the Black Lives Matter protests this summer. That’s in part because countries often look to the U.S. as a focal point for social justice issues, since the U.S. “culturally does have dominance in general,” Andrews said. But the history of the British Empire and slavery mean there is still an interconnection between Black experiences across the Atlantic.

“One of the things that gets missed sometimes with this is that Blackness is defined by diaspora,” Andrews said. “So when we see something that’s happening in America, or the Caribbean, or Africa, it does happen to us. There’s a very real sense it happens to us.”

That diaspora has its origins in Europe’s slave-trading past — which is why perhaps the defining images of the U.K.’s recent Black Lives Matter protests involved the denigration of monuments to the continent’s colonial history.

In Bristol, England, protesters toppled a statue of Edward Colston, a 17th century slave trader whose name, to this day, is featured on some of the city’s concert halls and pubs. The statue was unceremoniously thrown into the harbor where Colston based his slave trading, which is believed to have involved the kidnapping and trafficking of over 80,000 West Africans, about a quarter of whom died in transit to the Americas.

And in Brussels, Belgium, demonstrators protested a statue of King Leopold II, who was responsible for horrific atrocities in Congo, by climbing atop the monument and waving the African country’s flag.

A reckoning with Britain’s imperial legacy appeared to be a central point of the protests. One participant in London’s June protests told ABC News they were marching to help “educate” fellow Britons about their colonial past.

“One of the reasons why education and colonial history is such a big part of the movement here, is because we offshored our racial violence,” according to Andrews. “Britain and Europe like to pretend that they’re different from the States.”

Even so, it is difficult to say whether Europe has reckoned with its past in the aftermath of a tumultuous summer. According to Sherman, who regularly consults with U.K. police leaders, “because of what happened in the U.S., there’s much more pressure on British police than there was before George Floyd was killed.”

The visibility of the protests has helped raise funding for grassroots organizations — yet the national conversation around racism in the U.K. and the disproportionate impact of COVID-19 on minorities has swiftly moved on, according to Andrews, who said he’s surprised at “how quickly things have gone back to normal,” with “race only talked about in the culture wars context.”

Perhaps, said Andrews, the intensity of the summer’s protests was partly a result of the pandemic.

“The cynic in me is mostly down to the fact that it was lockdown, there wasn’t much else going on, and it kind of caught the imagination for that reason,” he said. “I strongly doubt if we were going about our normal business whether this would have made the impact that it did.”