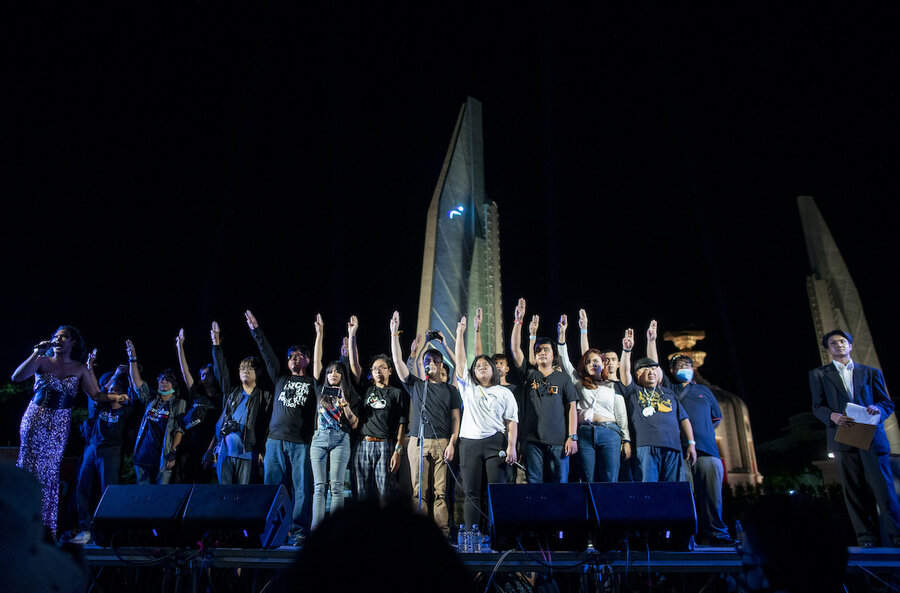 A two-day rally planned this weekend is jangling nerves in Bangkok, with apprehension about how far student demonstrators will go in pushing demands for reform of Thailand’s monarchy and how the authorities might react.

At least 10,000 people were estimated to have attended a major protest rally on Aug. 16, and a bigger turnout is expected this time. In an escalation of tactics, organizers plan to march to Government House, the prime minister’s offices, to hand over petitions.

The initial demands of the alliance of groups behind a series of anti-government demonstrations were for a dissolution of Parliament with fresh elections, a new constitution, and an end to intimidation of political activists.

But the main organizers behind this weekend’s rally have been promoting an additional point. They want restraints on the power of the monarchy, an institution long presented as the nation’s cornerstone and untouchable.

This open challenge to the palace has dramatically raised the political temperature.

These dissidents view the monarchy in its current form as opaque and unaccountable. At a rally last month outside Bangkok, they launched a 10-point manifesto for its reform.

Underlining their challenge, they plan to make a symbolic point this weekend by leading their supporters to occupy a field adjacent to the planned rally site.

The field, Sanam Luang, was until recently an open space. It was once Thailand’s equivalent of England’s Hyde Park, where politics could be openly debated. But now it’s classified as a royal site and permanently fenced off.

“We’ve destroyed the glass ceiling and blown the roof off,” one protest leader, Parit Chiwarak, better known as Penguin, said last week. “Birds are now flying freely into the sky. How far can we fly during this rally? We have to wait and see.”

It’s hard to overstate the gravity of what they’re doing.

For generations the state has relentlessly promoted the monarchy, presenting it as the sacrosanct soul of the nation. Its position is protected by a military that swears it personal allegiance. Many Thais love it unconditionally; others are constrained from criticizing it by a lese majeste law that mandates three to 15 years in prison for defaming the institution.

So far the authorities have stayed calm. Asked this week about the coming rally, Prime Minister Prayuth Chan-ocha’s response was carefully measured.

“I would like to express my concern,” he said. “I care about my children and you care about yours. As prime minister, I care about your children, too. It’s my duty to take care of them. I urge everyone to help resolve the situation.”

On Thursday night, he suggested in a speech about the coronavirus that the gathering should not be held because of a risk of spreading the disease.

“When you gather in mobs you are creating an enormous risk of new infections,” Mr. Prayuth said. “And with that, you also create enormous risk to the livelihoods of tens of millions of fellow Thais.”

What visible backlash there’s been has come mainly from older Thais to whom the students’ agenda, where it touches on the monarchy, is tantamount to treason. Royalists have fiercely denounced the students, but their efforts at organizing have been feeble, drawing mere dozens to events this week.

There is some fear, however, that the state may feel forced to crack down hard if the weekend’s rally pushes the monarchy issue too strenuously.

Whether now or later, one academic believes the yawning gap between the two sides makes trouble all but inevitable.

“There were several groups of reformist elites [who] try to compromise, try to convince the authorities in order to understand the students, but I haven’t seen any signs of compromise,” said Kanokrat Lertchoosakul, an assistant professor at Chulalongkorn University.

“So without this sign I still don’t know how we can avoid physical violence.”

There is plenty of precedent for that in Thailand. The military used lethal force to quash mass political demonstrations in 1992 and 2010. In 1976, security forces and right-wing vigilantes savagely put down a student rally at Thammasat University, the planned location for this weekend’s demonstration.