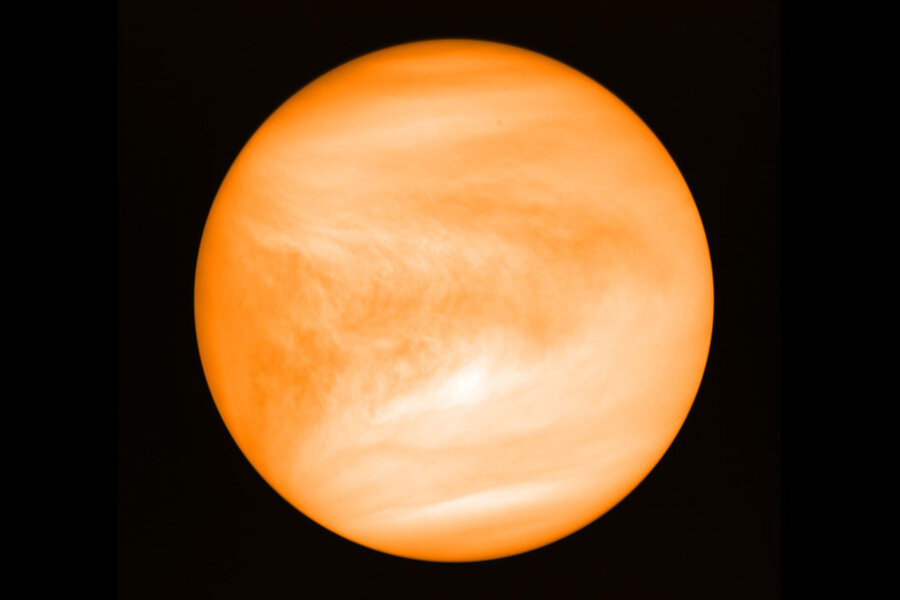 “It’s cool to think that it might be life, but the real thing is this is just a strange thing that we found that has some really cool implications that we need to learn more about,” says Paul Rimmer, a co-author of the new paper and an astrochemist at the University of Cambridge in Britain. “Whatever explains this feature, it’s something weird.”

Finding evidence of phosphine in the Venusian cloud bank thrusts the planet into the spotlight anew. This discovery also informs our search for habitable worlds outside our solar system, serving as a reminder that life on another world could look very different from the life we know here on Earth.

“We have essentially always considered Venus to be an uninhabitable world because of its incredibly high surface temperatures and its inhospitable sulfuric acid clouds and its ionizing environment, being closer to the sun, etcetera,” says Michael Way, an astronomer at the NASA Goddard Institute for Space Studies. So if closer scrutiny of the planet reveals that there is indeed life in Venus’ clouds, it could be a “game changer,” he says. “If it’s true, it makes us reevaluate what habitability means and the robustness of life-forms.”

Whittling down the possibilities

When Dr. Rimmer initially saw the data that bore a fingerprint of phosphine, his first thought was that it had to be something else. The colleagues that showed him that initial data might’ve been mistaken. That much phosphine shouldn’t be there.

Still, he was intrigued, so he joined the team and together they took another look with a different telescope. Sure enough, that phosphine fingerprint showed up again in the new data. And although it’s possible that the data could be indicating the presence of a molecule that scientists don’t yet know exists, says Dr. Rimmer, among known molecules, this signal is unique to phosphine.

But could phosphine only exist there if life does, too? Phosphine does appear elsewhere in the solar system, such as in the atmospheres of Jupiter and Saturn, likely without biology. Rather, scientists think it forms deep in those gas giants’ atmospheres at extremely high pressures and temperatures – conditions that don’t exist on a smaller rocky planet like Venus or Earth. On Earth, phosphine is produced industrially or by microbes (specifically bacteria involved in decomposition).

“It’s been an exploration of the unknown,” Dr. Rimmer says of the study. “The only known molecule that can cause that [spectral signature] is phosphine. The only known explanation for the concentration is life. But so little is known about the nature of phosphine, and so much is unknown about the constitution of the atmosphere of Venus. And so it really does bring you face-to-face with your own ignorance.”

In the quest to find life on another world, scientists only have one model of what to look for: Earth.

“As scientists, of course we have to be open-minded about what life might be like. But you’ve got to start somewhere,” says Laura Kreidberg, director of the Atmospheric Physics of Exoplanets department at the Max Planck Institute for Astronomy.

Venus may be a harshly hot and forbidding world today, but planetary scientists say it wasn’t always that way. Early Venus was likely quite a bit like early Earth. Sometime in its history, something made our once-twin take a different path.

Many scientists think it might have happened quite early in Venus’ history, says Dr. Way. But he has another idea: The surface of the planet might have been habitable for an extended period of time.

“It’s possible,” Dr. Way says, “it could have had surface liquid water oceans for, maybe, a few millions of years, hundreds of millions years, even as long as a couple billion years. And that something else happened to the planet later on in life that put it in the state that we see today.”

Dr. Way’s current hypothesis, described in a paper published earlier this year, is that some sort of extreme volcanism kicked off climate change of epic proportions on Venus, perhaps as recently as 700 million years ago. That event thrust carbon dioxide into the atmosphere, heating up the planet enough for its oceans to boil off into the atmosphere. And, given that water vapor is a powerful greenhouse gas, Venus would’ve just gotten hotter and hotter as all of its liquid water boiled off, thrusting it into a wildly different climatic state.

If Venus ever had flowing oceans, it could’ve possibly hosted some form of life at that time. But scientists agree that life probably couldn’t survive the intense heat on the dry surface today.

What about those cloud banks? The thinking goes that perhaps some tough survivors may have escaped Venus’ surface on droplets in the planet’s atmosphere. However, those clouds seem to be intensely toxic.

On Earth, biological material gets destroyed by that much acidity. Sure, there have been extremophiles found residing in incredibly acidic conditions, like the hot springs of Ethiopia’s Danakil Depression, but never in any place even remotely as acidic as Venus’ clouds.

Still, Dr. Way says, it might be that “evolution finds a way.”

“As the planet transitions into this ‘inhabitable’ state,” he says, if it doesn’t happen too quickly, it might be that “life has a chance to evolve along with it, in a way.”

A case study for exoplanets

To researchers searching for signs of life on distant worlds outside our solar system, this week’s news means Venus could provide an exciting opportunity.

“The holy grail of my whole research field is searching for signs of life in the atmospheres of other planets,” says Dr. Kreidberg, who studies planets orbiting stars other than our own sun, called exoplanets.

Those signs of life are called biosignatures, substances (like phosphine) that scientists think can only exist in a given environment if life is there, too. But when it comes to exoplanets, we don’t have the technology to go check it out up close.

But Venus is right next door.

“The really exciting thing is that we get to explore these questions in our own backyard,” she says. “We have the opportunity to actually go to the planet and learn in a lot more detail what’s happening in its atmosphere.”

NASA hasn’t sent a dedicated mission to Venus since the Magellan orbiter launched in 1989, and since then, the planet has mostly been observed by telescopes or as a spacecraft flew by on its way to another destination. The Japan Aerospace Exploration Agency (JAXA) does currently have an orbiter around Venus, but the last spacecraft to dip into the planet’s atmosphere was the Soviet Union’s Vega 2 in 1985.

“People like me, and others working in this discipline much longer than me, have been begging for in situ missions to Venus for decades,” Dr. Way says. “And if this brings that, then all the better. Let’s go back to Venus.”