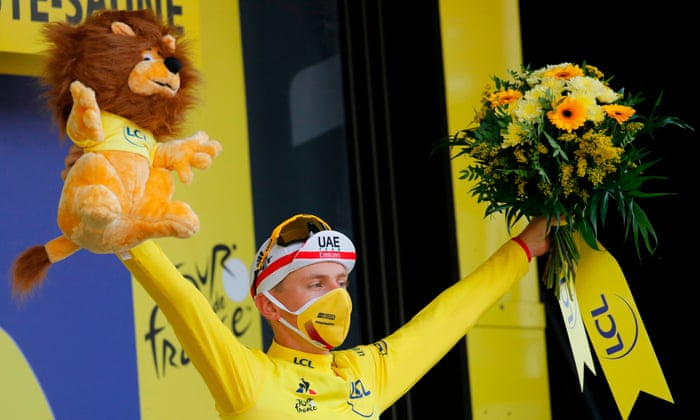 In the end, the procession became a cliffhanger as Tadej Pogacar blew away Primoz Roglic’s Tour de France hopes in the Vosges to become the youngest overall winner this century, after storming to an extraordinary stage win at La Planche des Belles Filles.

What had been expected to be a routine time trial for Roglic, on the eve of the processional stage to the Champs-Élysées, became a humiliation as he conceded almost two minutes to his 21-year-old compatriot and lost the yellow jersey.

Moments after being hugged by the defeated Roglic, Pogacar looked as shell-shocked as the former race leader. “I don’t know what to say,” he said. “I think I’m dreaming.

“I’m really proud of the team. They did such a big effort on the way to get the yellow jersey on the final day. We were dreaming that from the start and we achieved it.”

Watched in horror by his stunned Jumbo-Visma teammates, Tom Dumoulin and Wout van Aert, Roglic appeared out of sorts throughout the stage and struggled to find the fluidity that has characterised his climbing style.

A misfiring bike change from time trial bike to climbing bike at the foot of the final climb, only seemed to further slow his momentum.

Pogacar, meanwhile, was eating into the 57-second overall deficit. “I knew every corner, I knew every pothole on the road,” he said. “I knew where to accelerate, because it was a road that you needed to know, so congratulations to all my team.”

As Roglic crossed the finish line, helmet askew, face creased in pain, Pogacar was already celebrating. “My dream was just to be on the Tour,” he said, “and now I have won.”

It was the most remarkable turnaround at the climax of a Tour since Greg Lemond usurped Laurent Fignon in the final time trial of the 1989 Tour to claim overall victory by eight seconds.

As Slovenian fans come to terms with the outcome of this year’s race, the peloton rolls into Paris having accomplished what seasoned race-watchers considered impossible, three weeks of racing without any riders testing positive. This year, the testing protocols did not focus only on the illicit use of performance enhancement, but instead on coronavirus, which could have brought the race to a juddering halt at any moment.

Miraculously, the Tour de Covid bubble did not burst. Decried by some as irresponsible, but championed by others as an essential part of French tradition, the Tour of OCD, so-called due to the copious use of hand gel, shrugged off the predictions of doom – “a recipe for disaster,” said the global health expert Devi Sridhar – to fulfil the chest-beating assertion of the race director, Christian Prudhomme, that “only wars stop the Tour”. 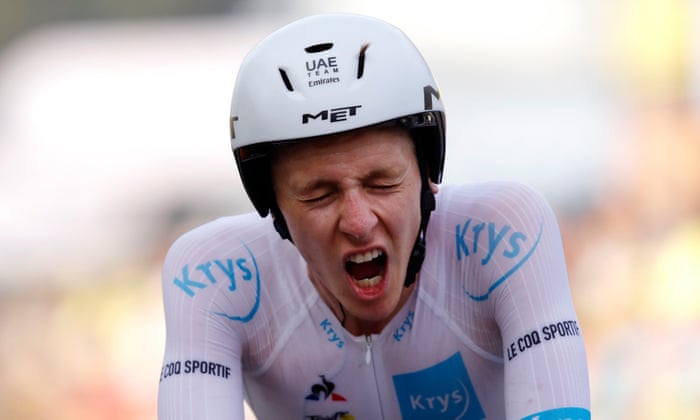 Where the explosive arrival of the Slovenians leaves the 2019 champion, Egan Bernal, and his Ineos Grenadiers team, is uncertain. As Dave Brailsford admitted after his team leader abandoned the Tour, it will mean a return to the drawing board, but there is no doubt that generational change, exemplified by Pogacar and Bernal’s status as two of the Tour’s youngest winners in history, is sweeping through professional cycling.

A year ago, Bernal was seen as a serial Tour champion, but now that lustre has gone and some are asking if he will win the Tour again. The obvious comparison is with Jan Ullrich, second in 1996 and victorious in 1997 when aged 23, who was expected to dominate for the foreseeable future. By 1998, famous, wealthy and hounded by the German tabloids, he was beset by health and fitness issues and scrambling to save his career. Ullrich never won the Tour again.

Bernal seems a far steadier prospect, but next year the Colombian will have to prove himself worthy of protected status in a team that will include Adam Yates, Geraint Thomas, Richard Carapaz and Pavel Sivakov. There is no doubt that, post-Chris Froome, who leaves at the end of this year, Brailsford’s team is in transition, with further signings rumoured to be looming.

This has been a memorable and strange Tour when real world issues, public health, diversity and the environment have often intruded. If Brailsford’s team is playing catch-up, then so, too, is the race that he and his riders have dominated for the best part of a decade.

Several mayors, specifically those elected on a green manifesto, have made it plain they consider the Tour be an anachronism, behind the curve on the environment and smothered by tradition. Gregory Doucet, mayor of Lyon, labelled the Tour ‘macho and eco-irresponsible’ just 48 hours before stage 14 arrived in the city.

There has been discussion too of how to react to the Black Lives Matter movement, with the only black rider in the peloton, Kevin Reza, becoming increasingly voluble on cycling’s lack of diversity as the race wore on. Discussions are ongoing within leading teams and riders on how best to respond to an issue that, after years being swept under the carpet, is now out in the open.

But as the Tour ends, Prudhomme will focus on the excitement surrounding Pogacar’s win. Change, as ever in professional cycling, will be slow. Just ask those in women’s racing, who have long been campaigning for a stage race equivalent to the Tour and have now been promised their own event in 2021.

Brailsford, meanwhile, salt rubbed in his wounds by Pogacar also lifting the King of the Mountains jersey from Richard Carapaz, has no time to waste.

Sean Dyche interview: Burnley boss tells Sky Sports about what he’s learnt as a manager ahead of major milestone against Southampton

Andy Murray ‘would play’ September French Open, if it goes ahead