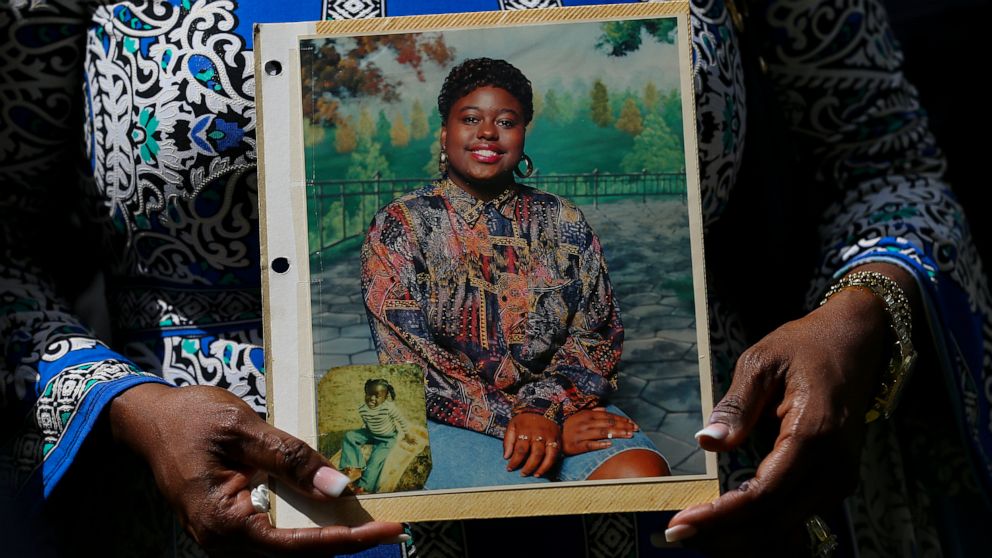 More than 16 months after a mentally ill Black woman was shot to death in a struggle with a police officer in the parking lot of her suburban Houston apartment complex, her family said Thursday that their prayers were partially answered when the officer was indicted on a felony charge stemming from the fatal confrontation.

Relatives of Pamela Turner, 44, say she was diagnosed with paranoid schizophrenia but posed no threat to Baytown police Officer Juan Delacruz when he attempted to arrest her on low-level misdemeanor warrants just hours after he helped serve her with an eviction notice.

A Harris County grand jury indicted Delacruz on Monday on one first-degree felony count of aggravated assault by a public servant.

“The news that my family received on Monday is the exact reason why we have not stopped calling my mother’s name for the past 16 months,” Turner’s daughter, Chelsea Rubin, said during a Zoom news conference on Thursday. “I prayed for this moment numerous times, and I prayed that my mother’s death would not be in vain and that she gets the justice that she deserves.”

Rubin thanked the grand jury for seeing that Delacruz “deserves to be punished for the crime that he committed.”

“He took my mother’s life. She will never come back. I will never hear her voice again,” said Rubin, wearing a T-shirt bearing Turner’s name and likeness. “This is one step closer to getting the justice that my mom deserves and allowing her to be able to rest respectfully as she should because she didn’t deserve to die, not like that.”

“It is important to acknowledge that her family and the community are in pain,” Ogg said at a news conference announcing the indictment.

Criticized by some members of the community for taking 16 months and a day to bring charges against Delacruz, Ogg responded that “every aspect of the case was independently investigated by the Texas Rangers and our Civil Rights Division prosecutors.”

“Ultimately, we presented all of the evidence to a grand jury that determined the Baytown Police officer should be charged with a crime for his actions when he shot Ms. Turner. We respect their decision and we will be moving forward with prosecution,” Ogg said.

Delacruz surrendered to authorities on Tuesday and was released upon posting $25,000 bail. He is scheduled to be arraigned on Oct. 28.

“My family and I are in prayer that October 28th will be the start of justice for Pamela Turner, “said Antoinette Dorsey-James, Turner’s sister. “Delacruz took a beautiful soul, a loving person away from us and every day is harder and harder. So, I hope that he’s convicted and sentenced to the maximum.”

If convicted, Delacruz faces 5 years to life in prison.

The shooting unfolded on May 13 at the Brixton apartment complex in Baytown, 25 miles southeast of Houston, after Delacruz attempted to arrest Turner on outstanding misdemeanor warrants, including one for criminal mischief and assault, officials said.

A witness cellphone video of the encounter that was posted on social media showed Delacruz, who was on duty and in uniform, approach Turner and attempt to handcuff her as she shouted, “I’m walking. I’m actually walking to my house.” Before the officer could handcuff Turner, she broke free but only took several steps before Delacruz caught up to her.

“You’re actually harassing me. Why? Why?” she said just before the officer deployed a stun gun on Turner.

During a struggle that ensued, Turner yelled out, “I’m pregnant.” As Delacruz attempted to handcuff her again, Turner allegedly appeared to reach for his stun gun and the officer moved back and out of the frame of the camera. The footage captured the sound of five shots ringing out.

An autopsy by the Harris County Medical Examiner’s office found Turner was shot multiple times and ruled her death a homicide. The post-mortem examination found she was not pregnant.

Delacruz was immediately placed on paid administrative leave. But within a week of the shooting, he was back at work on desk duty.

Delacruz’s attorney, Craig Cagle, told The Associated Press that Delacruz shot Turner in self-defense when she allegedly grabbed his stun gun and used it on the officer.

“There’s no facts that would justify a criminal charge against the officer,” Cagle said to the AP. “When someone takes a police officer’s Taser and then uses it against them, the officer is left with no options other than deadly force. That’s how the officers are trained.”

In a statement released following the announcement of Delacruz’s indictment, Baytown police officials said they turned over the investigation to the Texas Rangers, who submitted their findings to Ogg’s office.

“We have faith and trust in our judicial system, and as we wait for this case to proceed through the legal process, we ask that our community continue to be patient and have trust and faith in those processes,” the statement reads. “We also ask that our community continue to have faith and trust in the Baytown Police Department and the dedicated, professional men and women who are committed to serving all members of our community with integrity, compassion and professionalism.”

Civil rights attorney Devon Jacob, a former police officer who is representing the Turner family, expressed outrage that Delacruz has been allowed to keep his badge and remain on the police force.

“That to me, as a former police officer, is scary. It’s frightening. It means that the people of that city are in danger from the police department leadership,” Jacob said.

Jacob said he and his co-counsel, civil rights attorney Benjamin Crump, will be filing a civil suit in the case within 30 days. He said they did not want to take the legal action sooner and risk interfering with the criminal investigation.

Jacob said his investigation of the shooting shows that Delacruz moonlighted as a security guard at the Brixton apartment complex and knew Turner suffered from mental illness. He said that hours before the fatal confrontation, Jacob was involved in helping to serve Turner with an eviction notice.

He also said that Delacruz’s Taser gun was in “drive stun” mode, meaning it would have had to be placed against an individual’s body to cause harm. He noted the video shows that Delacruz was well beyond an arms-length of Turner when he drew his firearm and shot her.

“Pamela Turner should not have been shot,” Jacob said. “The force used by Juan Delacruz is objectively unreasonable. That means that any other properly trained police officer under the same circumstances would not have used the force that he used.”

The indictment against Delacruz came a day before a $12 million settlement was reached in the fatal shooting of Breonna Taylor, a Black woman who was shot to death in March in her own apartment when Louisville, Kentucky, officers attempted to serve a “no-knock” warrant and opened fire after breaking down her door with a battering ram.

The settlement, which lawyers for the Taylor family say is the largest ever paid out for a Black woman killed in an alleged police misconduct case, also includes an agreement to implement major reforms in the Louisville Metro Police Department in hopes they will prevent anything similar from occurring again.

Louisville Mayor Greg Fischer said the reforms are intended to build stronger connections between the city’s police department and the communities officers serve. They include establishing a housing credit program to incentivize officers to live in certain low-income neighborhoods in the city and encouraging officers to volunteer two hours every two-week pay period in the communities they serve.

A program will be established to include social workers in the police department to assist officers on certain calls, particularly those involving people suffering from mental illness. The reforms will also require the police department to overhaul how search warrants are obtained, and to create an Office of Inspector General to oversee an “early-warning system” that tracks use-of-force incidents and citizens’ complaints in an attempt to weed out bad officers, Fischer said.

The three officers involved in the shooting of Taylor have not been charged. Two of them remain on administrative leave, while another has been fired for violating police department procedure when he fired 10 rounds into Taylor’s apartment while executing the warrant.

Jacob said that if a settlement is reached in the pending civil case stemming from Turner’s death it will also include demands for police reform.

Crump, who represents the families of Taylor and Turner, said there are parallels between the two shootings.

“Like Breonna Taylor, Pamela Turner was unjustly targeted and killed by police, and had her name sullied by law enforcement in an attempted cover-up,” Crump said. “The indictment of the officer in the Pamela Turner case and the settlement in the Breonna Taylor case are both crucial steps in bringing much-needed and past-due attention on the treatment of Black women in this country.”

Windy, dry, hot weather to continue in California as dozens of fires rage

How Justice Ginsburg’s death could reshape the US presidential campaign