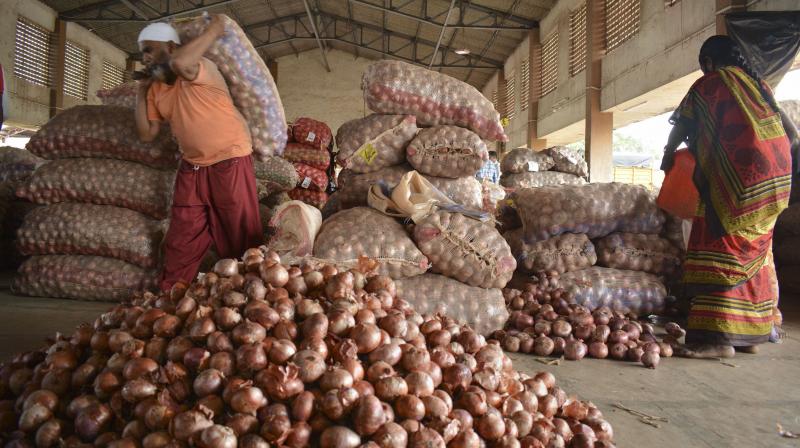 The Nationalist Congress Party (NCP) chief Sharad Pawar on Tuesday urged the Central government to rethink over its decision to ban the export of onions. He said such a decision will help Pakistan and other countries.

The Maharashtra Congress unit will stage a protest on Wednesday across the state over this decision. Meanwhile, All Bharatiya Kisan Maha Sabha said that the Central government has betrayed the farmers of the country by this move.

The NCP chief met Union commerce minister Piyush Goyal with a demand to reconsider its sudden decision. Pawar informed that Goyal has assured him that the government will rethink the decision if there is consensus among the ministries of commerce, finance, and consumer affairs on the issue.

In a series of tweets, Pawar said that the Central government has abruptly announced a ban on export of onions. This has led to strong reactions from the onion growing belt in Maharashtra. Therefore, the representatives of various political parties contacted and requested him to convey their demands to the Central Government.

“To address this issue, I met Union Minister of Commerce and Industry Shri. Piyush Goyal (@PiyushGoyal) today and apprised him of the plight of onion growers. I pointed out to him that these onion growers are mainly small land holders and Jirait farmers (sic), Pawar tweeted.

In another tweet, he said, “I also brought to his notice that onions are in good demand internationally & we have been exporting onions consistently. But a sudden decision to this effect by the Central government is a major blow to India’s image as a reliable exporter of onions in the international market (sic).”
In the wake of the decision, there is a possibility that India may emerge as an “unreliable supplier” of the commodity internationally, Pawar said, adding that the move will benefit nations like Pakistan and others.

In another tweet, Pawar said Goyal told him that the proposal to ban the export was moved by the Union Consumer Affairs Ministry based on the rising prices of the commodity.

Amid this, farmers at Lasalgaon in Nashik district, staged a protest on the streets against the ban. Agitations took place in Mungse, Pimpalgaon, Nampur and Umrane markets and protesting farmers stalled auctions underway for some 10,000 quintals that had arrived, and also tried to stop traffic in the vicinity, including on the Mumbai-Agra Highway that skirts past Umrane. The auctions started on Tuesday morning at a price of Rs 2,200 per quintal at Lasalgaon Agriculture Produce Market Committee (APMC).

Speaking to this newspaper, all India Kisan Sabha Maharashtra’s general secretary Dr Ajit Navale alleged that owing to the upcoming Bihar election, the farmers are being sidelined. The farmers of Maharashtra and the country have been betrayed by the Central government. The high onion prices are undesirable for any government seeking re-election. The farmers would stage a statewide protest on Wednesday, Navale added.