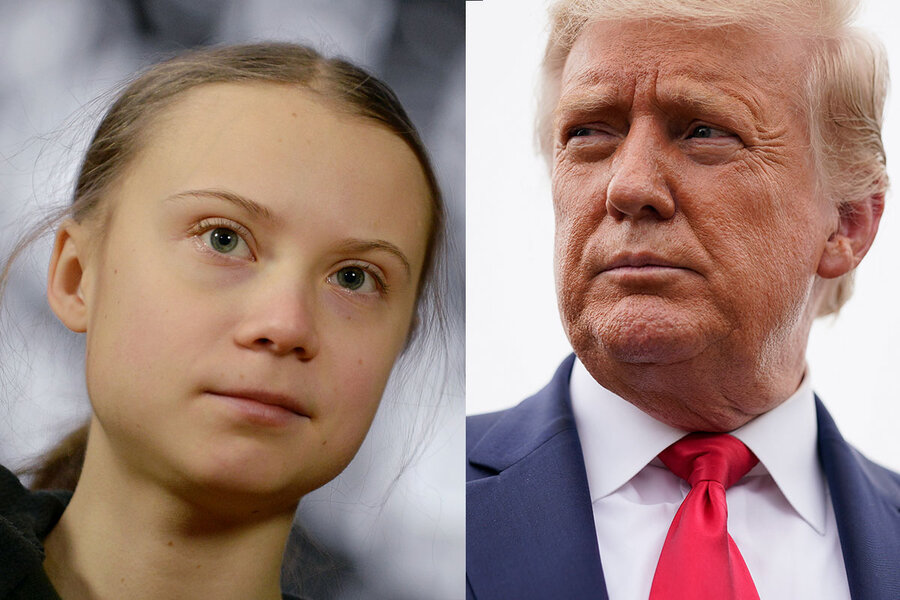 Ms. Thunberg’s supporters are not just the young who berate older generations for doing too little to reduce carbon emissions and halt the march toward an unlivable planet. Also present are groups of adults who admire the Swedish student’s activism and dedication to an existential cause. Many of them are in international media or are climate scientists, academics, philanthropists, or progressive political and cultural leaders.

For many on President Trump’s side of the audience, Ms. Thunberg’s supporters are reduced with an eye roll as belonging to the “global elites” – or as Fox News commentator Greg Gutfeld says derisively, “the cool kids in the cafeteria.” Supporters of a Trump Nobel may themselves be members of the global elite, but they hold themselves separate from the dominant “cool kid” mindset they say could never acknowledge that Mr. Trump just might deserve the prize.

“There are times when you can almost hear the Left-wing aneurysms happening. Such a moment occurred this week when it was announced that Donald Trump’s name had been put forward for the Nobel Peace Prize,” wrote the London Telegraph’s Douglas Murray last week. “Cue outrage, shock, denial, grief, rage, and a number of less elevated emotions.”

Of course the right side of the global theater – including Mr. Trump himself – had been equally dismissive and even merciless with Ms. Thunberg last year when she arrived in New York via solar-powered boat to address the United Nations General Assembly, spoke to the cream of the elites in Davos, and was named Time magazine’s 2019 person of the year.

There is no getting around the fact that the supporters of the two nominees are very different. Ms. Thunberg was nominated by two Left Party members of the Swedish Parliament who said that if neglected, the climate crisis will lead to new conflicts and wars. President Trump was nominated by Christian Tybring-Gjedde, a member of Norway’s Parliament from the right-wing populist and anti-immigration Progress Party.

Mr. Tybring-Gjedde had already nominated Mr. Trump for the Nobel in 2018 for his overtures to North Korean leader Kim Jong Un – whom he also nominated.

To a great extent, President Trump’s poor standing in global thought is a reflection of his deep unpopularity across much of the world. Outside of a few exceptions – Israel, the Philippines, to some degree Nigeria and India – Mr. Trump receives dismal and, in some cases, unprecedentedly low marks.

A new Pew Research Center survey released Tuesday of 13 countries, including key U.S. allies and partners, confirms the world’s falling esteem for the United States and dim view of the U.S. president.

The survey found historically low levels of esteem for the U.S. in the United Kingdom, France, and Germany, with just above one quarter (26%) of Germans having a favorable view of the U.S. Based on the results of other questions posed in the survey, the unprecedented low ratings are tied to perceptions of disastrous management of the pandemic in the U.S. as well as to Mr. Trump’s broad unpopularity.

At the same time, the Pew survey found pockets of relatively higher favorability ratings for President Trump in each of the countries surveyed – by and large among adherents to their country’s right-wing populist and anti-immigration political parties. People like Mr. Tybring-Gjedde in Norway.

“People on the right of the political spectrum were more likely than those on the left to have a positive view of both the U.S. and Donald Trump,” says Janell Fetterolf, an expert in global attitudes at Pew Research Center in Washington. “We also found this last year,” she adds, “that supporters of right-wing populist parties are more likely to support Mr. Trump, particularly over his policies related to immigration.”

This year’s survey found eye-poppingly low levels of support for Mr. Trump – 11% in France, 10% in Germany and Denmark, 9% in Belgium – but higher support across the board among right-wing populists.

Thus President Trump’s numbers in Spain rose sharply to 45% among supporters of the right-wing Vox party; and to 34% among voters for Germany’s Alternative for Germany party.

But even among Europe’s nationalists, Mr. Trump takes a hit on the question of global leadership over his shift away from previous U.S. presidents to his “America First” outlook on international affairs, Ms. Fetterolf says.

Polarizing is nothing new

Some experts in international affairs point out in any case that while the Thunberg-Trump Nobel nominations may indeed reflect a hyper-polarized world of deep political divides, this is by no means the first time the Nobel committee has received polarizing nominations.

“The fact that polarizing people are being nominated should not be all that surprising,” says Vincent Keating, an expert in international politics at the University of Southern Denmark in Odense. “The prize has previously been given to people that have been polarizing, both in terms of the reverence or contempt for them among certain political constituencies, and questions over whether they deserve the prize,” he adds. “See Kissinger and Obama for contrasting American examples.”

In any case, Professor Keating notes that while the patterns of global thought, political and otherwise, that are the impetus for Nobel nominations may be constantly shifting, reflecting widely divergent perspectives, “the underlying justifications for why these individuals should win the prize is relatively stable.”

In other words, are they peacemakers or not?

“Trump isn’t being nominated for just anything, he is nominated for his alleged role in brokering a deal that could sustain peace” in the Middle East, Professor Keating says. “Same with Greta Thunberg – her climate change activism is explicitly linked back to the role it has in preserving peace.”