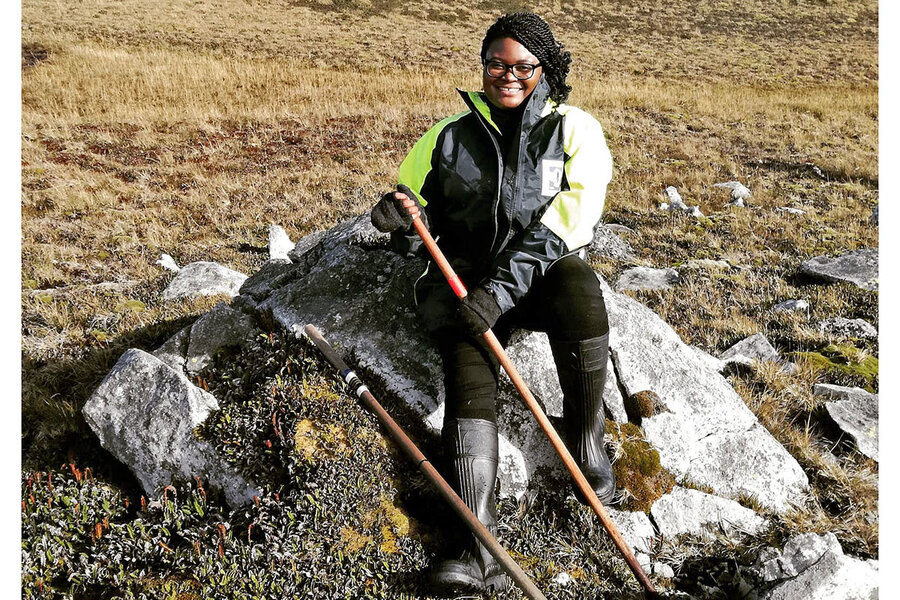 “When I saw scientists, I saw Einstein. I saw white people,” she says. “For me, it felt so far-fetched.”

This was Nelson Mandela’s South Africa, where Black women like her could now aspire to be an engineer or maybe a doctor. She could dream of being a lawyer or a teacher. But a scientist? “That still wasn’t for someone like me,” she says.

Today, however, Ms. Phoma is on the cusp of finishing her doctorate in microbial ecology. She studies what she calls the adventures of the ocean’s microorganisms, whose diversity is a bellwether for that of ocean life more generally, and whose contributions to their ecosystem, she says, are often overlooked by researchers.

If revealing the importance of those organisms lies at the core of her scientific work, equally important is making the world see that this work can be done by people like her.

“I am aware that I am occupying a space that never had me in mind,” she says. “Scientists work every day with incredibly complex ideas, but we struggle to understand more basic ones like race and power.”

“Growing up, most of us didn’t have role models to look up to, so now that we’re in the position to be the role models, we want to do something to encourage the next generation,” says Munira Raji, a Nigerian British geologist at Durham University in the United Kingdom who co-organized the program with Craig Poku, an atmospheric scientist at the University of Leeds, and Hendratta Ali, a geologist at Fort Hays State University in Kansas.

Black in Geoscience Week followed in the footsteps of several other “Black in…” weeks on social media in recent months. The trend began in June, with Black Birders Week, organized after a video of a birder named Christian Cooper being threatened in New York’s Central Park by a white woman went viral in May. After that came Black in Chem Week, Black Women in STEM Week, Black in Neuroscience Week, and several others.

For the scientists who thought up Black in Geoscience, the crisis in their field felt especially acute. In the United States, only 12% of current graduate students in the earth sciences were Black, Indigenous, or people of color as of 2019. Just 3% were Black. And racial minorities as a whole make up only 4% of all tenured or tenure-track professors in the top 100 geosciences programs in the U.S.

“We wanted a chance to celebrate the work that Black geoscientists are doing, but at the same time to ask why we remain the smallest demographic in the field,” says Dr. Poku.

That lack of diversity, many argue, speaks to wider cultural stereotypes about who “belongs” in the outdoors – the very kind that led to Mr. Cooper having the police called on him for birding, or made Ms. Phoma question herself throughout her Ph.D. research as her fellow graduate students chatted about the weekends they spent surfing and sailing.

But many observers argue it is particularly important to have scientists of color in the earth sciences, many of which explore the impacts of climate change, because around the world, it is communities of color that stand on the front lines of that crisis.

Long before Ruth Sitienei studied and worked with Kenya’s top scientific minds as a soil scientist, she had another teacher in the field: her father. Growing up on his farm, she learned from him how to conserve nutrients in the soil, and protect their environment from degradation.

“Even now that I work in the field, I know there is no one who knows a farm better than the farmer,” says Ms. Sitienei, a soil scientist with the Nature Conservancy. “And they are the ones most invested in protecting it.”

Tiara Moore, a postdoctoral researcher working in soil biodiversity at the University of Washington, says Black geoscientists often make the connection between their research and wider issues of environmental justice much more quickly than their white colleagues, who may not have such direct lived experience with it.

“When I look at my research questions, I look at them differently,” she says. “I bring a different set of experiences to the table.”

On Twitter this week, Black geoscientists shared their research and chatted about their struggles in the field. Many said they had never had a Black mentor or professor. Others noted the loneliness of being the only Black scientist in a department or lab. In a Twitter chat called #Blackinthemud about fieldwork, Dr. Moore shared the experience of a white woman threatening to call the cops on her as she conducted her research.

“These conversations we’re starting to have this week are only scratching the surface,” Dr. Poku says. “But we’re hoping they open a door, and we can continue after this week is over.”