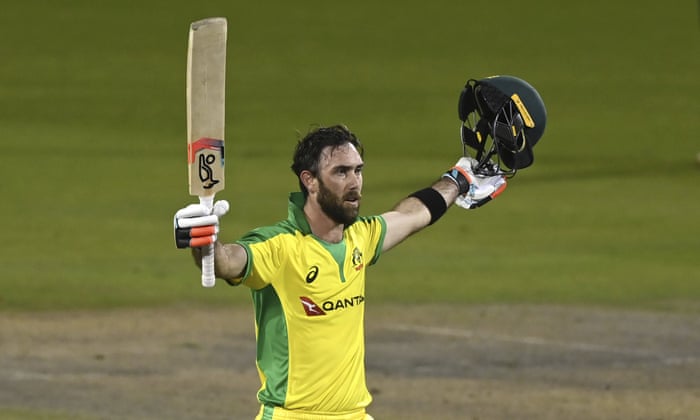 “I don’t understand how I’m able to hit sixes.” Glenn Maxwell said that in an interview. It sounds strange, because so far in professional cricket he has hit 539 of them. What he meant was that when he looked in the mirror, he did not see much to suggest that six-hitting was on the agenda.

It is true that Maxwell is not one of those athletes who look like they were engineered in a lab. Nor are lots of cricketers, but not many cricketers hit more sixes than he does. The few whose records compare, like Andre Russell or Kieron Pollard, are giant slabs of human muscle.

When you see Maxwell at the batting crease though, his ability makes a sort of sense. While almost slender, he is rubbery, loose-jointed. His arms are long, his limbs seem to hang in the breeze rather than tensely await contact. The way he stands speaks of potential energy about to be transformed.

When the transformation comes, he can dip his knees, splay his feet, extend those arms, twist or contort any part of his frame, and snap that energy back through the ball and into the atmosphere.

A Glenn Maxwell innings creates more joy than an equal number of runs from anyone else. Science cannot quantify this but the human heart knows. There is the predictability: you know he is going to launch soon. There is the unpredictability: you do not know how. There is the unorthodoxy, the mad inventiveness: the reverse hook, the switch hit, the lookaway cut shot over backward point. He plays the game as flamboyant self-expression, having trained flamboyancy into a refined skill.

The consequence is that he leaves you wanting more. His presence alone promises a world of entertainment that probability cuts short. His style means he is employed to close innings more than open them, in flurries that do not get the scope to become storms. After several years of bouncing around within Australia’s one-day team, he is now back to batting at No 7, the job late in the day that means fireworks or fizzle.

This was the context for Maxwell’s efforts on Thursday morning Australian time, when early risers were rolling out of bed, while evening viewers in England had their attention on Old Trafford in Manchester for the decider of a series that had been packed with plot twists.

With Australia collapsing at the top of the order, Maxwell had the canvas for something ambitious. He has won matches off his own bat before, but this was bigger in scope. He walked in to join Alex Carey at 73 for five. No team has ever recovered from a score that bad to chase over 300. Australia needed 303.

What followed was not just a marvel because they produced that comeback. It was the way that Maxwell marshalled the chase. The composure, the strategy. His customary flair, but channelled into efficiency and effectiveness. This was Maxwell’s masterpiece. 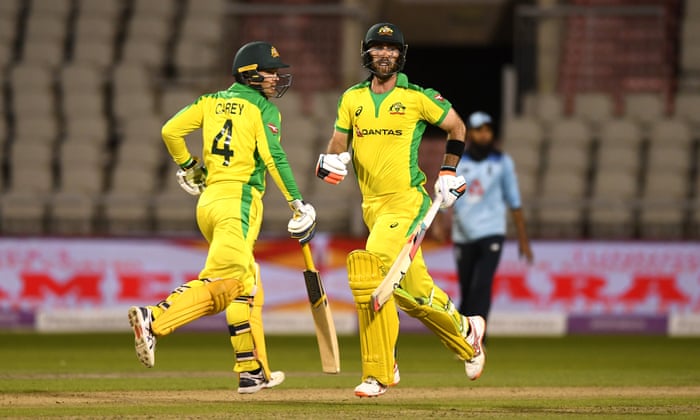 Even before the fifth wicket, Australia were frazzled. Two wickets fell to part-time spin from Joe Root. Marnus Labuschagne should have been run out taking a panicked single, and marked his reprieve by getting run out attempting another panicked single.

Maxwell replaced all of that with confidence. He had set up Australia’s win in the first match of the series with 77 from 59 balls. The new pitch for this third match was close to one side of the ground, creating a short boundary. That was on his leg-side when he faced Jofra Archer. So from Maxwell’s third ball, he flicked Archer off his pads for six.

The shot changed the atmosphere. The opposition’s primo fast bowler, spanked as casually as you like. Maxwell scored nine runs from his first four balls. England had the game in the bag, but he was indicating that he would not make it easy.

We have Archer to thank for the dramatic hours that followed, too, given he overstepped the bowling crease to spare Carey from a catch at third man. Maxwell took a chance to unsettle Archer in the same over with a little uppercut over the keeper for four.

The double-act worked. Carey was struggling, but even when he could not turn over the strike through a maiden from Tom Curran, Maxwell’s scoring rate had forestalled any panic. On 17 from 31 balls, Carey dragged away a boundary and started to get into the game.

Maxwell forged ahead. He hit Root out of the attack with a straight loft, making England bring on Adil Rashid’s leg-spin for the crucial match-up of the night. His slice off Curran was precision, diverted from outside the tram tracks to split backward point and short third man.

Part of his magic has always been the things that do not work, the audacious looking ridiculous. In the midst of swapping his bat position to reverse-sweep, Maxwell realised a ball from Rashid was too straight and low, and had to fall over in a flurry of limbs to make contact in front of his stumps. The fact that he got the wristband of his glove on the ball, sparing him from a leg-before-wicket dismissal in front of middle stump, was classically Maxwell.

With the left-handed Carey starting to find singles, the pair fed one another the strike depending who had the short boundary in their leg-side hitting arc. Maxwell sent a six there off Curran, then found his range against Rashid. His first slog-sweep against the leg-spinner disappeared down a stairwell. The second hit the window of the hospitality stand on the second storey.

When Maxwell missed a reverse-sweep to a wide ball, he was criticised on commentary for aiming at the larger boundary. But he knew that Rashid was now trying to hide outside off stump, so he wanted to make that line seem risky. When Rashid brought the line in, Maxwell duly swept another six, adjusting to inward drift to hit flat over the fence.

The lookaway pull shot got an outing against Archer, while England’s focus on protecting the short leg-side boundary let Maxwell clout over mid-off. He whipped another six off Curran to raise his century. Throughout the innings, there was the delight of seeing what was often a cameo in a feature-length format.

There was all of Maxwell’s extravagance: the way he gallops around the crease, the way he throws his whole body into a shot. There was the ball soaring away, seven times in all. There was also judiciousness and sense. There was risk – a comeback of that magnitude demanded it. And there was a managed approach to that risk.

Even the shot that got him out with three overs to go had a purpose: with Rashid having to bowl again, and with Maxwell having the short boundary available, it was a chance to get the runs required below the number of balls remaining. Changing tack to prod singles could equally have come undone.

There was an equally telling sign after the match: he seemed satisfied, not delirious. In the past, given the criticism he has always received for his style of play, Maxwell has often come across as under pressure, his successes not something to be enjoyed but a way to prove a point. This time he came across as a player who believed he could do something special, and did. The rest of us were lucky enough to go along for the ride.