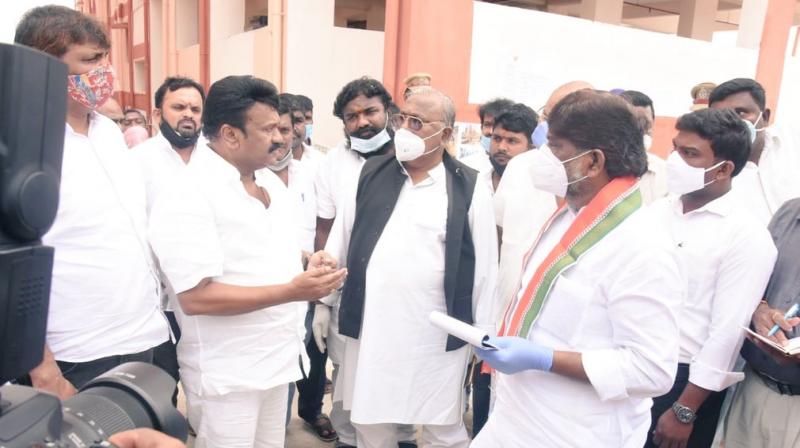 Hyderabad: Minister Talasani Srinivas Yadav failed to show the one lakh two-bedroom houses that were stated to be ready for distribution to beneficiaries to Mallu Bhatti Vikramarka, leader of the Congress Legislature Party, as per a challenge during a heated debate in the recently concluded Assembly session.

Conceding defeat by default, Yadav said, “He (Bhatti)… is only seeking publicity in the media. He says there are hundreds of acres of land available in Hyderabad city and GHMC limits, where two bedroom houses can be built. If he can show us the land, we will build the houses in future.”

Bhatti, claiming victory, said, “He (Yadav), unable to show one lakh two bedroom houses, left the joint tour after showing houses built in Nagaram in Medchal-Malkajgiri district. Totally, they have not even built 6,000 houses in the city. Even if those outside the GHMC limits are considered, the total does not touch 10,000. We will expose how the TRS is lying to the people of Hyderabad.”

A few days ago, a verbal battle over construction of one lakh two-bedroom houses for the poor in city ended in a duel of sorts in the Assembly, with both Yadav and Bhatti agreeing to go on a joint survey to see if the houses are ready as per government claims.

According to the Congress leader, “Talasani had no answer to the point that Tukkuguda and Nagaram were not in GHMC limits. After failing to show houses as per the challenge, he gave up and said he will give us a list of one lakh houses. This exposes the hollow claims of the TRS government on distribution of houses for the poor in Hyderabad.”

Yadav, the TRS MLA representing Sanathn-agar, dismissed the words of Bhatti, saying, “Congress leaders are speaking irresponsibly. We can give 90 per cent of houses built outside GHMC limits to beneficiaries selected from the city limits. Chief Minister K. Chandrashekar Rao told us one basic principle: never make tall claims.”

The minister also instructed the media to not raise this issue, saying, “there is no need for anxiety in the media on this issue. Is this a joke? Do you know how many hundreds of crores of rupees have been spent to build houses? Who do you think these are meant for?”

Bhatti said, “the truth has been exposed that both KCR and KTR made false claims in the Assembly. We will visit every basti and expose the lies of the TRS government. People should teach TRS a lesson by not voting for it in upcoming GHMC elections.”