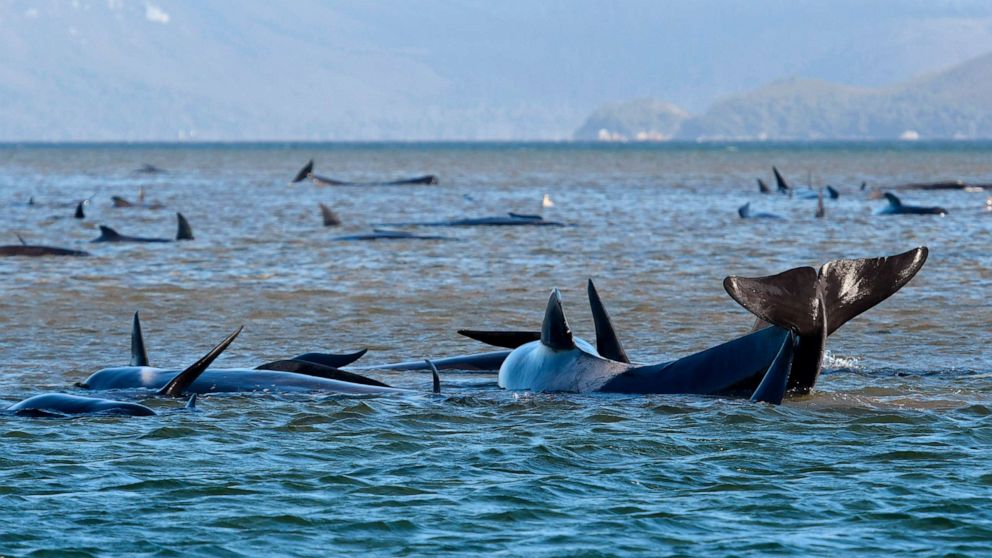 A rescue team in Australia is attempting to save as many pilot whales as possible after more than 270 became stranded in waters off the coast of Tasmania.

The whales are currently in three different locations off Strahan, a town on the west coast of Tasmania, according to Nic Deka, wildlife regional manager for the Tasmania Parks and Wildlife Service.

Some of the whales are stranded near a sandbar off the Macquarie Heads boat ramp while others are stuck at a sandbar several hundred meters away inside Macquarie Harbor, Deka said, adding that those whales are submerged in water.

About 30 whales are also stranded off Ocean Beach and about 25 have died, Deka said. About a third of all the whales have died, Dr. Kris Carlyon, a wildlife biologist, told reporters.

Many of the whales are in locations that are not easily accessible, Deka said. But the wet and cool weather is increasing the likelihood that some of the whales will survive, he noted.

A rescue effort consisting of about 60 parks department staff, employees from a nearby fish farm, police and volunteers set out Tuesday morning in an attempt to re-float the whales, which will involve getting water beneath them again, Carlyon said. The rescuers will begin with the animals with the best chance of survival, Carlyon said.

It is unclear how long the rescue will take.

Strandings of pilot and sperm whales are not uncommon in Tasmania, Deka said, adding that Macquarie Harbor seems to be a “hot spot.” Deka hypothesized that it may have something to do with the whales’ navigation and false echoes, while Carlyon said the “misadventure” of one or two whales while feeding off the coast could lead many others astray because of the social nature of the species.

A stranding of this size has not occurred in more than a decade, Deka said.

Pilot whales often travel in groups of up to 1,000, so there may be more offshore, Carylon said.

Rescue efforts may receive a boost in a few days when stronger tides arrive in the area, Carlyon said.