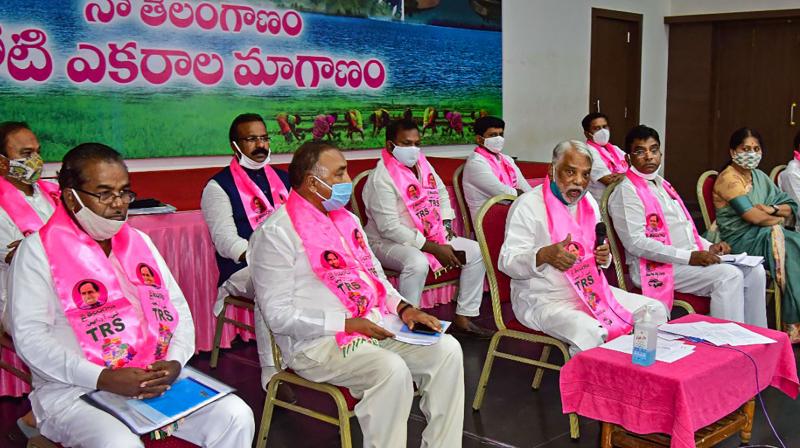 Chief Minister K. Chandrashekar Rao has instructed his TRS MPs to be combative with the Centre during the ensuing monsoon session of Parliament to secure the state’s pending demands and the state’s legitimate share of GST monies.

The strategy emerged after Rao held a meeting with TRS Parliamentary Party members at Praga-thi Bhavan on Thursday to finalise the stance it will adopt during the Parliament session sch-eduled from September 14. The party chief told TRS Lok Sabha and Rajya Sabha members not to hesitate in exposing the BJP-led NDA government for the injustice it had subjected Telangana state to in the last seven years.

He asked the MPs to expose the Centre for not releasing the GST compensation due to state governments in the name of Covid-19 pandemic and suggesting that the states borrow on their own. Sources in the party disclosed that Rao asked MPs to take the support like-minded parties for the purpose.

Addressing a press conference at Telangana Bhavan later, TRS Parliamentary Party leader Dr K. Keshava Rao, and TRS leader in Lok Sabha Nama Nageswara Rao accused the Centre of neglecting the demands of the state government. They said the Chief Minister had got tired of writing letters to the Centre since the past seven years, requesting the PM and Union ministers concerned to resolving the state’s issues.

The Centre did not implement even the promises made in accordance with the Constitution during the bifurcation of AP.

They said the TRS government had decided to confront the Centre to realise its legitimate demands. The party will not mind if someone terms it a “war with the Centre,” they maintained. Dr Keshava Rao said that owing to attitude of the Centre, the state government had been losing `10,000 crore of its share in the GST.

He said the party will also oppose the New Electricity Act proposed by the Centre.

Dr Keshava Rao and Nageswara Rao pointed out that the Centre had not even given a single paisa to the Mega Textile Park at Warangal. It also did not allocate urea to the state though there has been a 24 per cent increase in area under cultivation.

Dr Keshava Rao said, “We earlier extended issue-based support to the Centre. This time, we will not compromise on our rights. We will create hungama in and outside Parliament. We will also conduct dharnas with support of other parties.”

Nageswara Rao said, “We shall wait and see whether or not Telangana BJP MPs, who have been creating hungama against the state government, will join us in our fight for legitimate rights of the state.” The MPs stated that the TRS will not play any politics in election of the Deputy Chairman of the Rajya Sabha.