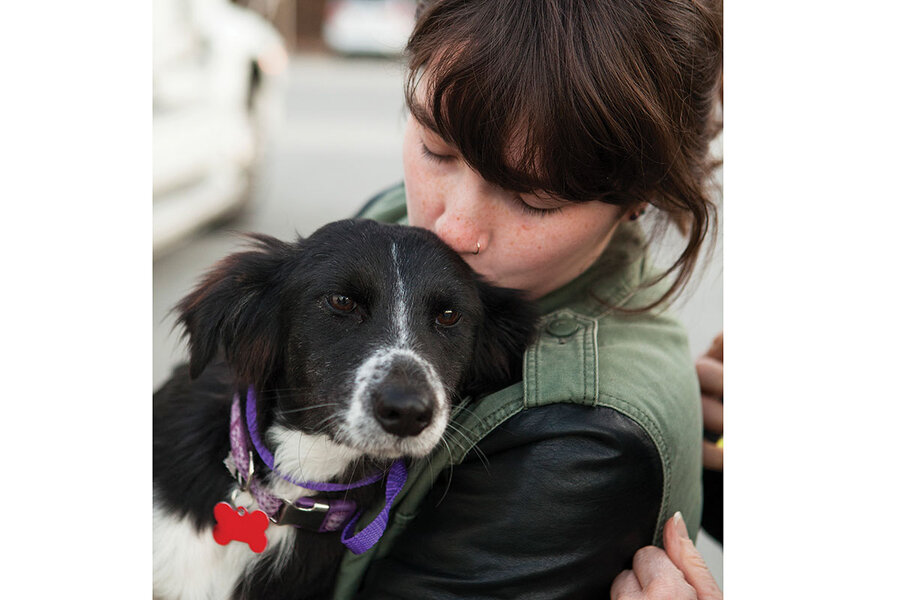 I’m crouching in the animal shelter’s driveway when an oversized red pickup pulls up. Bonni, the dog I have come to see, pushes her nose into my hand. Bobbi, the woman who has brought Bonni out to me, looks at the truck.

We hold our breath – she, behind her respirator mask; me, above Bonni’s ears, one perked, one flopped. I remember what Bobbi had told me on the phone.

“We’ll keep doing adoptions,” she’d said. “We’re not allowed to let anybody into the shelter, but I don’t see why we can’t do everything outside.”

“Yes,” I said, thinking about the recent rush of regulations, the counties on my state’s pandemic map changing colors every day: gray, green, blue, red. So many cases. So many rules.

“A truck drops dogs at my shelter every month,” Bobbi had told me. “If we don’t adopt out these dogs, other dogs will die.”

“Yes,” Bobbi said. She has some underlying health issues and is being very cautious during the pandemic. “I won’t let anybody in my house. But I have done adoptions from my yard. You just have to be careful.”

I’d started to look for dogs to adopt on a cellphone app in between crying fits over not being able to see my family for a year or more. Fewer dogs were listed every day. Shelters and rescue organizations were shutting down. “Governor’s orders,” their websites said. Experts predict it may be 18 months before there’s a semblance of a return to normal. We may be just at the beginning of this.

In the animal shelter’s driveway, I look away from the broad shoulders of the policeman climbing out of the red truck. I run my hands along Bonni’s back. Tufts of undercoat loosen, drift on the wind, clump on wet pavement.

When I look up again, the officer is still standing at the entrance to the drive. His gaze bores straight ahead, piercing the air above me and Bonni, above two parked cars. Behind the cars, mesh wire outlines kennel runs.

The first is empty. In the second, a German shepherd paces, turns, vaults up against the shelter wall. Pace, turn, bounce. Repeat. In midjump, she yelps, looks out across the fences, her eyes dark, frantic.

“She looks young,” the policeman says.

Bonni nudges my hand. I resume scratching her, then turn to look up at the policeman’s face.

“We can’t let you inside,” Bobbi says.

He looks crestfallen. “Yes. Of course.”

“But,” Bobbi says, slowly, “if you fill out an application, I can bring her out to meet you.”

The young man’s face lights up.

“Thank you,” he says. His eyes track the dog.

“Yes,” he says, barely breathing, his gaze glued to the dog. “Yes.”