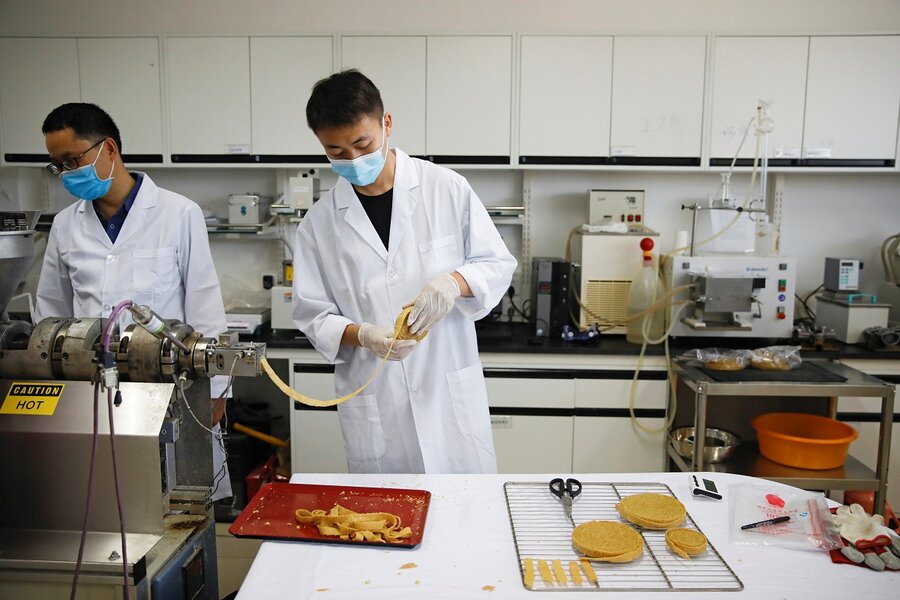 In a vast, illuminated greenhouse set among Iceland’s otherworldly lava fields, genetically modified shoots of an ancient cereal crop may hold the key to the food of the future.

Using abundant geothermal waters for heating, and volcanic ash instead of soil, biotech company ORF Genetics is growing barley here to produce “growth factors” – one of the most important, and costly, ingredients in laboratory-grown meat.

Sales of plant-based meats have soared during the pandemic as customers shift diets due to growing unease about factory farming, working conditions in meat-packing plants, and suspicion over a possible link between wild animal meat and COVID-19.

ORF and other firms hope that means more people will want to try their lab-grown, cell-cultured meat when it becomes available in the next year or so, though high costs and doubtful consumers could mean “clean meats” – as the nascent industry calls them – take longer to gain acceptance.

“This technology – taking a stem cell and turning it into meat – will have a huge impact on the environment,” Bjorn Orvar, co-founder and chief scientific officer of ORF, told the Thomson Reuters Foundation in Iceland’s capital, Reykjavik.

“Because then you will reduce land use so much. And you will really reduce the emissions and water consumption. … This will also make local food production much easier,” he said.

Greater concern about such issues may have fueled demand for soy sausages, bean burgers, and other plant-based meats during global coronavirus lockdowns.

Between March 21 and June 20, sales of fresh plant-based meat in the United States were up by triple digits every week compared to last year, according to non-profit The Good Food Institute (GFI), which analyzed data from market research firm Nielsen.

Sales of fresh traditional meat also grew during the same period, although at a much lower rate.

The emergence of the coronavirus and The Game Changers, a documentary about athletes who follow plant-based diets, encouraged British teacher Melanie Devaney to return to her vegetarian roots.

In Asia too, market researcher Euromonitor is expecting the region’s market for plant-based options – typically based on soybeans or other grains or pulses – to grow by 11.6% this year.

China, whose 1.4 billion population could sway global demand, is set to have a “phenomenal year” with both local and international plant-based products entering the market, said Elaine Siu, managing director for GFI in Asia Pacific.

The trend bodes well for the whole alternative protein sector, she said, including companies trying to produce beef, pork, poultry, and seafood by nurturing animal cells in a petri-dish and then in large bioreactors resembling beer-brewing vats.

Still, for many consumers, moving from soy- or mung bean-based burgers to steak or seafood grown from animal cells is too big a leap.

Consumer reluctance is not the only hurdle ahead for the cultured meat pioneers. They will also need approval from regulators, and production costs remain high.

At ORF’s space-age greenhouse, the scientists chose barley – one of the first cultivated grains – because it can grow under tough conditions and does not cross-pollinate, meaning strains genetically modified for different uses can grow side by side.

The barley seeds have been bio-engineered to produce growth factors, proteins that stimulate the growth of specific tissues including those needed to recreate animal muscle and fat cells.

Mr. Orvar said the technique is more cost-effective and makes it easier to ramp up production of cell-cultured meat compared with using growth factors from more conventional sources such as E.coli bacteria or human tissue.

While the costs of producing meat in a lab have fallen dramatically, they remain a major hurdle to mass production.

In 2013, when the world’s first lab-grown burger was unveiled, it had a hefty price tag of about $300,000. Since then, production costs have fallen dramatically to around $50 a pound – still far more than top-quality Argentine beef.

Others, however, caution that cultured-meat production would need to minimize energy use and avoid fossil fuels in order to be a truly climate-friendly alternative.

Globally, rearing livestock accounts for about 14.5% of planet-warming emissions, according to the United Nations, and land used for agriculture is a major driver of deforestation.

Ruminants such as cattle, buffalo, sheep, and goats produce nitrous oxide, carbon dioxide, and methane, which is the main gas they release, mostly through belching.

And as the pandemic encourages people to pay more attention to what they eat and how it is produced, there could be greater pressure for consumers in rich countries who currently eat more meat than necessary to cut their intake.

“If immediate changes in eating patterns as a result of COVID-19 are retained in the longer-term, one possible opportunity to emerge … may be a shift away from over-consumption of meat,” said a recent Cambridge University Press paper.

Despite signs of a shift in consumer consciousness, Daniel Vennard, the London-based head of Better Buying Lab at the World Resources Institute, an environmental think-tank, cautioned against looking only at the rosy picture painted by rising sales of plant-based meats.

GFI data showed meat sales also grew and because meat has a much higher base, it reduced plant-based meat’s market share from 1.5% in early March to 1.27% in early May, he said.

Richard Horsey, the co-author of “Ugly Food: Overlooked and Undercooked,” a book about tasty, cheap, and sustainable foods, said he had doubts about whether the search for alternative meats will pave the way to a greener global diet.

“It would be better if everyone got more in touch with their food, or ate much less meat.”