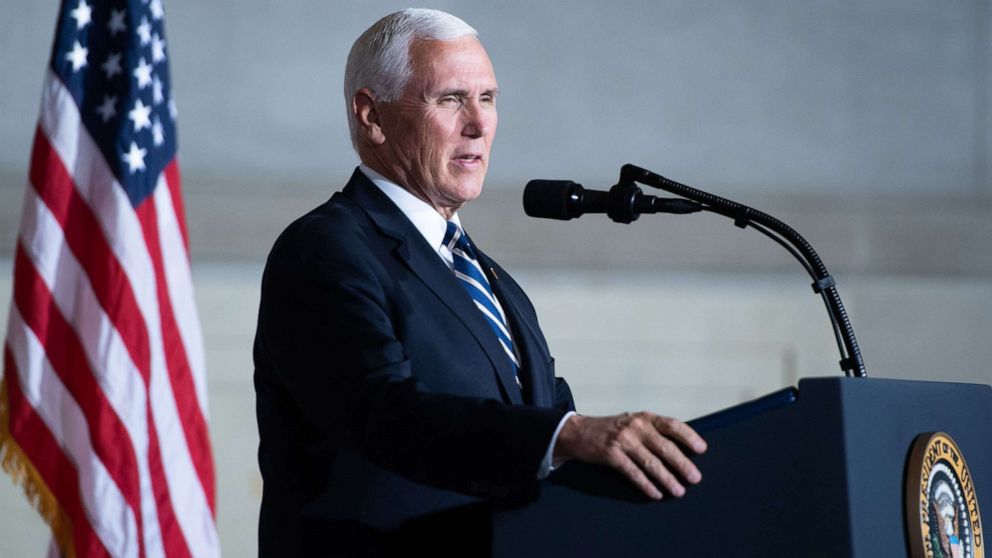 The group, which handed over similar extensive documents to the Hillary Clinton campaign for a price in 2016, told ABC News that instead of charging campaigns or allies for the opposition research book this cycle they’re hoping it will be a bigger benefit to the public and allies to post a fully searchable version online as the campaign heads into its final stretch.

Included in the opposition material is a damaging portrait of Pence as leader of the White House Coronavirus Task Force, specifically his optimistic outlooks, such as his prediction that the pandemic would be “behind us” by Memorial Day, and a Wall Street Journal op-ed proclaiming there is no “second wave,” despite the reality of increasing cases across the country during that time.

The group, founded by controversial liberal political consultant David Brock, said in the document that the vice president is “a right-wing ideologue with a long history of trying to destroy programs important to middle-class Americans,” and points to his record on health care, entitlement programs, like Social Security and Medicare, and voting against programs that aided American families with food insecurities.

In the wake of the deaths of George Floyd and Breonna Taylor by police and the racial reckoning unfolding in the United States, Pence’s record on issues for the Black community is also laid out. They include his opposition to the 1992 Civil Rights Act, which Pence called “objectionable” and his repeated refusal to say “Black Lives Matter.” Instead, Pence has said he believes that “all lives matter.”

The research even includes Pence’s run for a U.S. congressional seat in 1990, which was billed by an Indiana newspaper as “one of the most negative and unethical” campaigns in state history and led Pence to publish an essay a year later, “Confessions of a Negative Campaigner,” in which he apologized and expressed regret for his tactics.

“Mike Pence likes to masquerade as an anti-establishment Republican but his decades of failed leadership, attacks on the middle class, and corruption expose him for the swamp monster he truly is,” according to the document, which attempts to paint a contrast between Pence and President Donald Trump. The pro-Democratic Super PAC also says that Pence uses his leadership of the coronavirus task force to push a right-wing radical agenda.

When asked for comment, a Trump campaign official told ABC News that they have “roughly four times as many pages of opposition research on (former Vice President Joe) Biden and (Sen. Kamala) Harris combined between us and the RNC.” The campaign suggested that even though American Bridge is posting its research online for everyone to see “doesn’t mean it will move the needle or help anyone.” The official also said the campaign used a document by the group this weekend to help build out Biden’s past statements on vacant Supreme Court seats this weekend.

Last month the group posted its opposition research book on President Donald Trump online for the first time for free, posting over 1,000 pages of research on the president on a website previously reserved for internal use only.

Opposition research is typically highly guarded and released over time at critical points in an election to cause damage to a political opponent — but dropping easily searchable information on candidates publicly has become more common in recent years as an effort to help political campaigns access them without violating campaign finance rules.

Some research can be used to point out an opponent’s inconsistencies throughout their political career in an attempt to diminish their credibility among the general public.

In 2019, when asked by ABC News Chief Anchor George Stephanopoulos at the White House during an ABC News exclusive interview whether his campaign would accept such information about a political opponent from foreigners — such as China or Russia — or hand it over the FBI, Trump said, “I think maybe you do both.”

Trump called that information from foreign advisories “oppo research.” Trump told Stephanopoulos that “I think I’d take it,” and that it isn’t interference in the United States political process.

The comment came on the heels of the investigations into Russian interference in the 2016 campaign and ahead of impeachment proceedings, when the president was accused of pressuring Ukraine to dig up damaging information on Biden.

“It’s not an interference, they have information — I think I’d take it,” Trump said. “If I thought there was something wrong, I’d go maybe to the FBI — if I thought there was something wrong. But when somebody comes up with oppo research, right, they come up with oppo research, ‘oh let’s call the FBI.’ The FBI doesn’t have enough agents to take care of it. When you go and talk, honestly, to congressman, they all do it, they always have, and that’s the way it is. It’s called oppo research.”