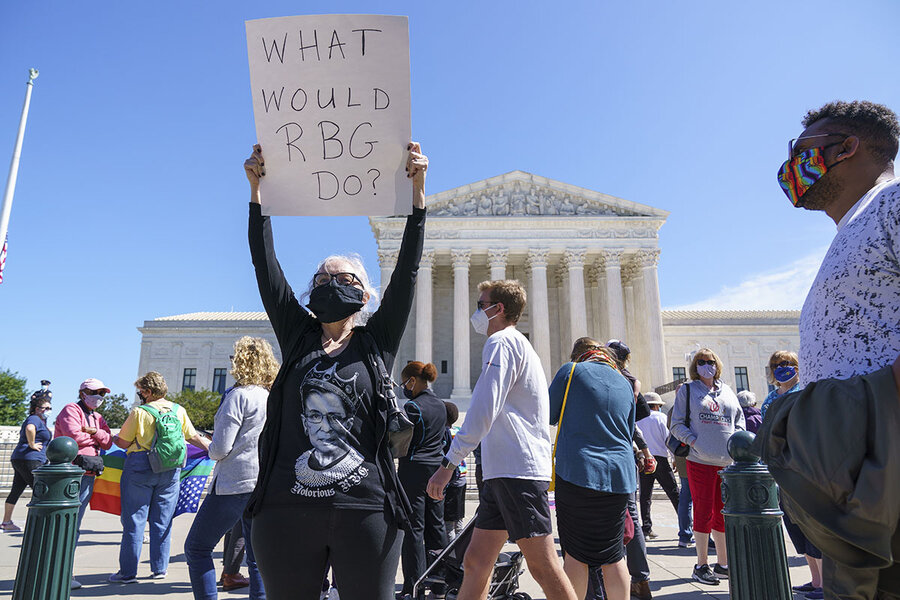 “What’s gone on over the last four years is one threat after another and the weakening of our institutions. Our institutions of government are frayed at this point,” says Christine Nemacheck, a professor of government at the College of William and Mary. “It’s got to be, at some point here, country over party.”

If nothing else, the sudden vacancy at the Supreme Court has scrambled the way President Donald Trump and Democratic nominee Joe Biden plan to deal with the last weeks of the 2020 election.

Democrats have tried to make the election a referendum on Mr. Trump’s performance in office, in particular his perceived mismanagement of the U.S. response to the coronavirus pandemic. Some 200,000 Americans have died – the highest death toll in the world. Republicans have attempted to focus on the economy, pre-COVID-19, and the possibility of a sharp recovery from recession. Now both have to incorporate the Supreme Court in some manner, keeping in mind that “Supreme Court appointments” ranked third in a recent Pew poll of which issues voters think important in the upcoming election.

President Trump has vowed to name his nominee for the seat by the weekend. Senator McConnell will likely proceed quickly with the hearing process after that, though it remains unclear whether he will schedule votes on the nominee before or after the November election. Two GOP senators – Lisa Murkowski of Alaska, and Susan Collins of Maine – have already objected to voting before Election Day.

Republicans say that the introduction of the court as a campaign subject can only help their candidates, from the president on down, by raising the visibility of judicial appointments – an area where Mr. Trump has had success.

“It reminds people of one of the more critical decisions that their elected officials make,” says Eric Wilson, a GOP strategist.

It will also fire up Republican voters, they say. Taking things slow, perhaps by delaying anticipated votes, might squelch some of this enthusiasm. And voter enthusiasm is something that endangered GOP candidates such as Sen. Martha McSally in Arizona need.

“In the big picture of all the Senate races, they’re going to have a big problem if they don’t dig in and fight on this,” says Brian Darling, a GOP strategist at Liberty Government Affairs and a former Senate staffer.

Mr. Darling and other Republicans defend Senator McConnell against charges of hypocrisy by noting that in 2016 circumstances were different. A Democrat was president and Republicans controlled the Senate, as opposed to today’s situation, where Republicans control both.

And procedural debates about such things as a so-called “McConnell rule” on nominations don’t matter in the end, Mr. Darling says.

New Democratic interest in the court?

Conversely, Democrats say Senator McConnell’s actions demonstrate openly to voters that all the GOP is interested in is power, not principles or voter representation.

“I think Republicans are overreaching here. I know this is politics and we’re all big boys and girls, but I think they are going to pay a price for that,” says Joel Payne, a Democratic strategist with The Hub Project.

In the past, Democrats haven’t placed that much emphasis on the courts, but that’s changing as an organized GOP effort places more and more right-leaning judges on the bench. In fact, this year Democratic voters might be as fired up by the open Supreme Court seat as Republicans, says Mr. Payne. According to Pew, 66% of Biden supporters place a high priority on the issue of Supreme Court appointments, as opposed to 61% of Trump supporters. In the first day after Justice Ginsburg’s death was announced, grassroots donors gave $91.4 million to Democratic candidates and causes – smashing previous records, ActBlue announced this weekend.

If they forge ahead with a pre-election vote, Republicans likely will be sacrificing Senator Collins, a moderate who is already struggling in her reelection race, and perhaps other GOP Senate candidates in swing states, says Mr. Payne. And they may unite Democrats on court issues, something that’s not been the case in the past.

Court packing – adding seats to the Supreme Court via legislation, which is legal under the Constitution – has long been controversial in the party. President Franklin Roosevelt tried and failed to expand the high court when conservative justices initially blocked key New Deal reforms.

Such a move all but invites GOP retaliation. Voters might see increasing the number of justices as overreach in itself. In the past, former Vice President Biden has dismissed the idea.

But if they win the Senate and the presidency, yet face a Supreme Court dominated by conservative judges, the Democratic Party could come together to support this or other big structural changes, such as statehood for D.C. and Puerto Rico.

“What you are seeing the beginning of is pretty widespread court reform becoming a mainstream issue in the Democratic Party. It’s not a far-left issue anymore because of Republican overreach,” says Payne.

The process of putting judges on the bench of federal courts, particularly at the Supreme Court level, has been political for a very long time. F.D.R.’s failed court packing attempt is just one example. Richard Nixon, the last president with three court picks in the space of a single four-year term, lost Senate votes on two nominees before successfully getting Justice Harry Blackmun confirmed.

But the tipping point was Robert Bork’s failed nomination by Ronald Reagan in 1987, says Dr. Nemacheck of William and Mary. That’s when judicial nominees began attracting concerted opposition from political activists – a trend that’s only intensified since, culminating to this point in the intense confirmation battle of Justice Brett Kavanaugh, who was accused of sexual misconduct in high school by Christine Blasey Ford.

Is there any way of getting past the cycle of grievances created by this process, with both sides feeling the other treated them unfairly? Brian Darling of Liberty Government Affairs is not sure there is, given the close political balance of the nation as a whole and the high stakes of the fights.

“This will go on for the rest of our lives because this is the way the process is built,” he says. “That’s politics, and that’s OK.”

And the court itself has some power over how it affects America’s political balance. There is some evidence that the court has responded to public opinion and acted strategically in response to the national political divide. Chief Justice John Roberts, for instance, has moderated somewhat and become the median justice, swinging back and forth to protect what he sees as the court’s legitimacy, says Lee Epstein, the Ethan A.H. Shepley distinguished professor at Washington University in St. Louis.

“It is possible, of course, that the court will pay attention to the mood of the country,” says Dr. Epstein. “Maybe some of these predictions about a super conservative court are a little overwrought. But a lot of it depends on what happens in the elections.”

The case against ObamaCare is weak. It will probably succeed anyway.