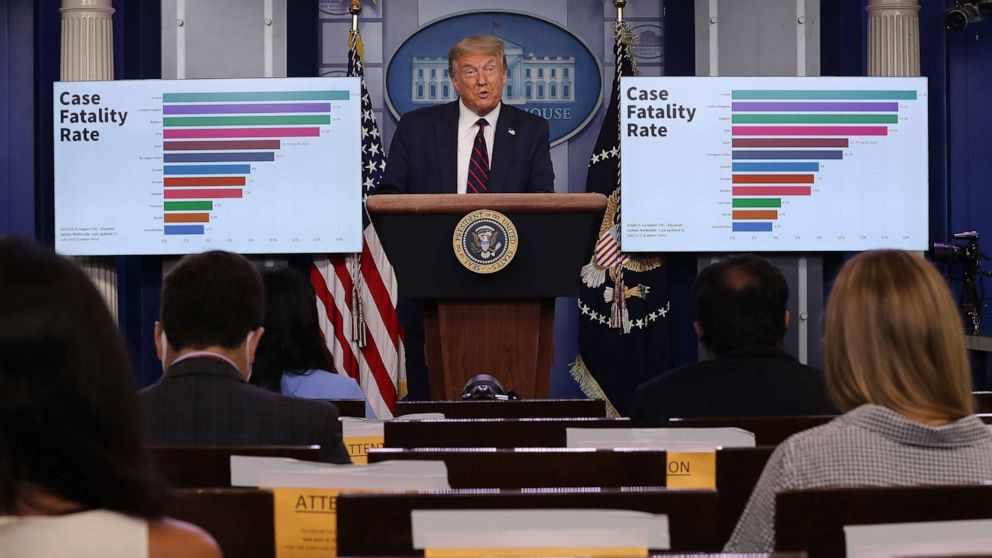 The spread of COVID-19 accelerated over the summer, and death tolls now stands at more than 200,000 over eight months – a figure equal to the lives lost in almost 70 9/11 terror attacks.

“A lot of people think that goes away in April, with the heat,” Trump said in February. When that didn’t happen, Trump told Fox News this summer: “It’s going to disappear, and I’ll be right.”

As COVID-19 cases in the U.S. have declined in recent weeks, after record highs during the summer, health officials are bracing themselves for a tough winter when Americans move back indoors and the seasonal flu begins to circulate. Seriously complicating the issue is how public trust in the federal response has eroded after a summer of chaotic messaging and unwarranted optimism by Trump and his top advisers.

By a nearly 2 to 1 margin, Americans distrust what the president says about the pandemic, and the latest polling by Langer Research Associates found that 62% are very or somewhat worried that political interference will prompt the government to push out a vaccine without ensuring it’s safe and effective.

That distrust likely has only worsened in recent weeks following reports that political appointees pressured the Centers for Disease Control and Prevention to alter scientific reports and encourage fewer tests. Trump then publicly rebuked CDC Director Robert Redfield for testifying that most Americans won’t get a vaccine until the middle of 2021, and a top communications official resigned after posting an online Facebook rant accusing the CDC of trying to undermine the president.

Now, health experts say, is the time for the Trump administration to play it straight if it wants public cooperation to end the pandemic.

“We have to provide realistic expectations if we are to build public trust,” said John Brownstein, chief innovation officer at Boston Children’s Hospital and professor at Harvard Medical School and and ABC News contributor.

In many ways, the federal government operated during the crisis much as it typically does — as a massive, sprawling bureaucracy, lumbering on autopilot.

The CDC deployed staff to trace outbreaks aboard cruise ships and later at nursing homes and meatpacking plants; staff from the U.S. Food and Drug Administration scurried to authorize new tests for the virus; and various offices at Health and Human Services effectively shored up the nation’s stockpile of ventilators and respirators desperately needed by medical staff.

But the health crisis quickly outpaced those efforts. More than 100,000 died in the first four months. And then again over the second four months.

In an interview this summer with ABC News, Redfield acknowledged that while the Trump administration cut off travel from China early on in the pandemic — likely saving lives — it was a mistake by the government to ignore the threat of spread from European travelers.

“By the time we … shut down travel to Europe, there was probably already two or three weeks of 60,000 people coming back every day from Europe,” he said.

There were other federal missteps. The CDC had bungled the first batches of testing kits. And federal scientific advisers initially urged Americans to not buy masks because of shortages facing hospital workers — guidance quickly reversed after research showed how easily the virus could be transmitted.

Both the speed of viral transmission and the bureaucratic morass seemed to confound White House staff.

Joe Grogan, who served as a top presidential adviser as director of the White House Domestic Policy Council until late May, said he left the White House with little faith in the federal bureaucracy and skeptical of the judgments of its scientific advisers, who early on in the pandemic wrongly downplayed the threat of asymptomatic spread.

He cites “antiquated and clunky” systems run by the CDC to collect data and track the virus, along with excessive regulation at the FDA and expensive labs at the National Institutes for Health that weren’t focused on COVID-19.

“The bureaucracy that was supposed to respond just broke apart,” Grogan said.

For Trump’s part, the president said it should be up to the states to figure out a response, and he publicly vented on Twitter.

He also stopped holding routine press briefings with members of the White House task force on novel coronavirus. Reporters are now less likely to hear from Dr. Anthony Fauci, the nation’s top infectious disease expert, at the podium than Trump’s new pick: Dr. Scott Atlas, a neuroradiologist and a public policy fellow at Stanford University’s Hoover Institution who has questioned the overwhelming scientific consensus that masks are critical.

Fauci has mostly shrugged off the politics, often searching for common ground with the president and others.

“The only thing I can say is that there are a lot of people who are looking carefully and are driven by the truth,” Fauci said in a recent interview on MSNBC, “and I think the American people should feel confidence in that.”

Jerome Adams, the surgeon general, echoed that statement this month in a livestream even with the U.S. Chamber of Commerce and suggested politics has colored everything.

“It makes it hard to have these conversations,” he said, “because I say one thing that you may hear completely differently depending on what your priorities are, and what is most important to you.”

Now, after a summer of sky-high case numbers as much of America ignored the threat, the country remains at a crossroads. Will the majority agree to fight the virus with masks and social distancing, as Fauci and other health officials have suggested? Or does the country accept the pandemic as a way of life and reopen — a move that could pave the way for tens of thousands more deaths?

Richard Besser, former acting CDC director and CEO of the Robert Wood Foundation, said there is reason for optimism.

“It doesn’t have to be this way. We can defeat this virus if we come together as a nation and follow a public health roadmap to getting the pandemic under control and safely reopening our economy,” he said in a statement released Tuesday.

But Grogan, who left Trump’s White House for a private sector job, said he’s skeptical of any roadmap that might call for the country to remain locked down while waiting for a vaccine.

“Why are we sitting here sheltering in place waiting for a really difficult scientific endeavor to bear fruit?” he said. “It just doesn’t make sense to me.”

Liberals need to sleep in the bed they’ve made