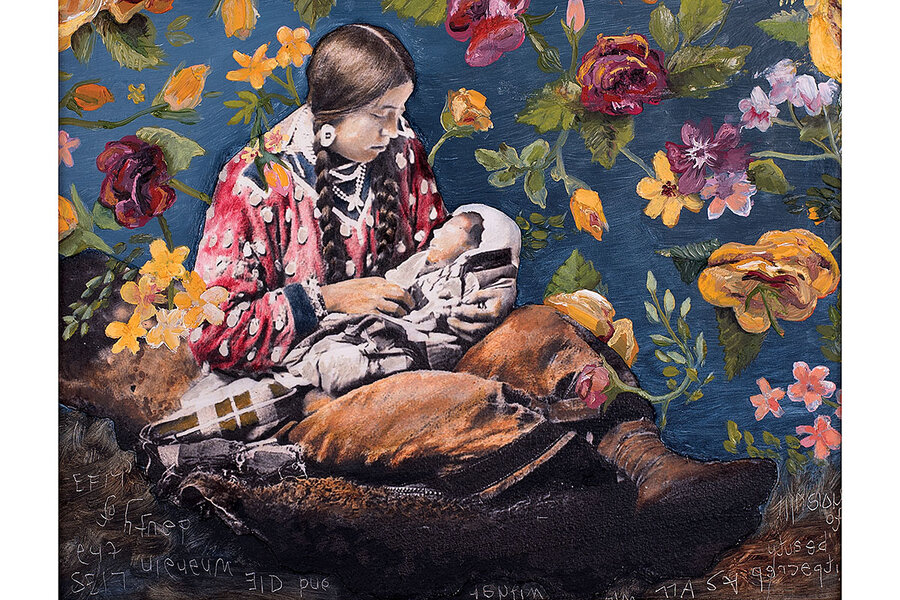 Growing up on the Crow reservation in Montana, Nina Sanders learned some of her most valuable lessons not in school, where the textbooks were silent on her people and she was discouraged from speaking her native language, but at home with her grandmother and great-grandmother, listening to their stories and “tearing apart sinews, washing clothes outside, picking berries.”

Now Ms. Sanders celebrates the contributions of Crow, or Apsáalooke (Ahp-SAH-luh-guh), women in a major exhibition at Chicago’s Field Museum. “Apsáalooke Women and Warriors” paints a vivid picture of Apsáalooke history and culture, drawing on the Field’s extensive collections of Indigenous objects, including 19th-century ceremonial war shields, as well as on the work of contemporary artists, like rapper and fancy dancer Supaman. The result is rich and wide-ranging and proclaims unmistakably: We are still here.

Museums are increasingly turning to Indigenous peoples to represent themselves to the world, a movement that Ms. Sanders and others call the “decolonizing” of American museums. What sets Ms. Sanders’ exhibition apart is its focus on women, portraying them as keepers of culture and celebrating their devotion to family, clan, and homeland.

“The women in my community are incredibly resilient, beautiful human beings who have managed to keep our community together in moments of devastation,” says Ms. Sanders, a guest curator at the Field and the first Native American to curate an exhibition there. “They just shine.”

“Apsáalooke Women and Warriors,” open until July 18, 2021, and expected to travel after that, tells about the Apsáalooke through their own eyes and their own stories, beginning with their creation from the sea and continuing through their migration to the eastern slope of the Rocky Mountains and eventual settlement on a reservation south of the Yellowstone River. The exhibition uses examples of Apsáalooke artistry to suggest how traditional beliefs and values have persisted and endure today. It shows the Apsáalooke reaching back to old ways of life and reinventing them in new circumstances and a new time.

The exhibition also reflects a transformation in museum practice and representation of Indigenous Americans that dates to the Native American Graves Protection and Repatriation Act of 1990. That act, itself a product of decades of activism, led to the return of remains and sacred objects and a new era of collaboration between museums and Indigenous peoples. It also inspired a shift away from portraying Native Americans as a vanished people toward emphasizing their contemporary culture.

The focus on women is more recent. Among the inspirations for Ms. Sanders’ exhibits were not only her childhood memories but also a recent, groundbreaking exhibition about Indigenous women artists, called “Hearts of Our People: Native Women Artists,” at the Minneapolis Institute of Art. Novelist Louise Erdrich said of that: “At long, long last, after centuries of erasure, Hearts of Our People celebrates the fiercely loving genius of Indigenous women.”

Paying more attention to women has highlighted underappreciated aspects of Native American culture, including the importance of communal ties, says Amanda Cobb-Greetham, a member of the Chickasaw tribe and director of the Native Nations Center at the University of Oklahoma. Ms. Cobb-Greetham, who is also a trustee of the Smithsonian’s National Museum of the American Indian, contrasts the idea of “repatriation”– returning Native remains and sacred objects to the tribes from which they were taken – with “rematriation,” or the restoration and reassertion of core cultural values.

“It redefines how we understand leadership, or significant achievement, and what values we want to carry forward,” she says. “That may or may not be military leader or government official. It may be something entirely different.”

One of the women portrayed in the Field exhibition is Sharon Stewart Peregoy, an Apsáalooke elder and Montana state representative. Though most Apsáalooke leaders have been men, including those in elected positions today, Ms. Stewart Peregoy says women have played a central role in helping the Apsáalooke endure decades of dramatic and often painful change.

“Through the transitions, especially with Native women and Crow women,” she says, “there was a need for everyone – and still today – to pull together, to participate, and with the ending of nomadic life and making the change to being put on the reservation, to be able to undergird our men, our warriors, quietly, not so quietly in some ways, but to get them to have hope again. That way of life died. But the woman says no, we can inspire to be more.”

Ben Pease is an Apsáalooke artist who contributed paintings and other works to the exhibition, including an oil painting that shows a procession of women on horseback, each wearing a gold halo. “We do believe as Apsáalooke people that women are holy and sacred beings,” Mr. Pease says. “They have the ability to give life and save culture and perpetuate culture into the future.”

Mr. Pease grew up in Lodge Grass, Montana, reared by “mothers and aunts and grandmothers,” he says.

“I learned the strength of women early on, and the role they play. In an underresourced and underrepresented community, they lead and are the great leaders to help us step into the future – but also to preserve the past, to be keepers of medicine and knowledge.”

The Field exhibition portrays the Apsáalooke as matriarchal and egalitarian. In one of the tribe’s stories, man and woman are created at the same moment. Rawhide war shields, decorated with owl feathers and dried bird heads, are displayed beneath giant images of women “to symbolically care for these shields,” a note says.

And yet beyond this, Ms. Sanders and her Apsáalooke collaborators invite viewers to reimagine what it means to be a warrior today and to perform the acts of bravery that traditionally distinguished the greatest Apsáalooke fighters. They pay homage to past warriors and leaders like Plenty Coups, Spotted Tail, and Joe Medicine Crow, an author and decorated veteran of World War II. But they also celebrate women – and men – who have become scholars, artists, and teachers.

“Nina tries to present a contemporary interpretation of what a warrior is,” says Ms. Stewart Peregoy. “That’s the idea – to get our young people to reawaken to their Native self, to their Crow self, and to what they can aspire to.”

“Apsáalooke Women and Warriors” opened in Chicago in March with a gesture to the past: a traditional Crow parade in which scores of Apsáalooke visitors, mostly women, walked in a line down city streets, some on horseback, and many more on foot, to the accompaniment of Apsáalooke singing and drumming. Ms. Sanders’ grandmother, Margo Real Bird, was among them. At a ceremony afterward, the pair stood arm-in-arm, a reminder of the bonds between past and present that Ms. Sanders wants to honor.

“It’s love,” she says. “It’s what transmits culture across time.”