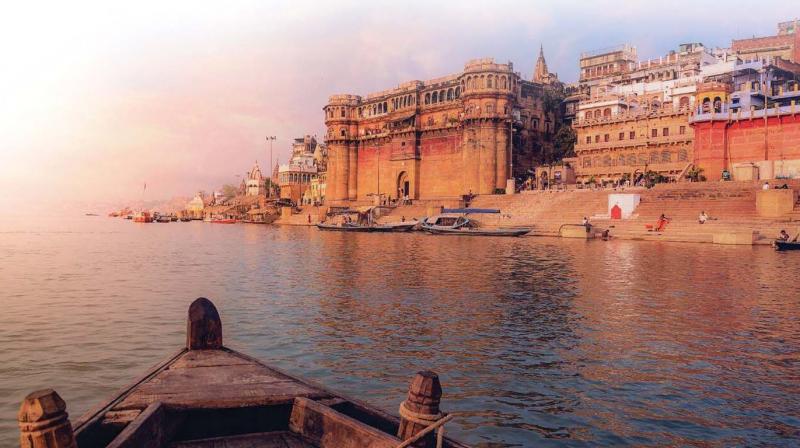 Legend has it that the day of Kartik Poornima is when the Gods ascend to Earth to shower their blessings into the Ganges. Travelling in a large group, 19 of us set out to the spiritual capital of India – Varanasi. An auspicious start to our trip was marked by a hearty meal of Sattu Parathas and Jalebis right outside the hotel. Later, we did a walking temple tour: Kasi Viswanath Temple, Kal Bhairo Temple, Vishalakshi temple, which is similar to the Mata Temple of South India.

It is believed that before entering the Kasi Viswanath Temple, one must visit the Kal Bhairo temple since He is the protector of Kasi Viswanath. 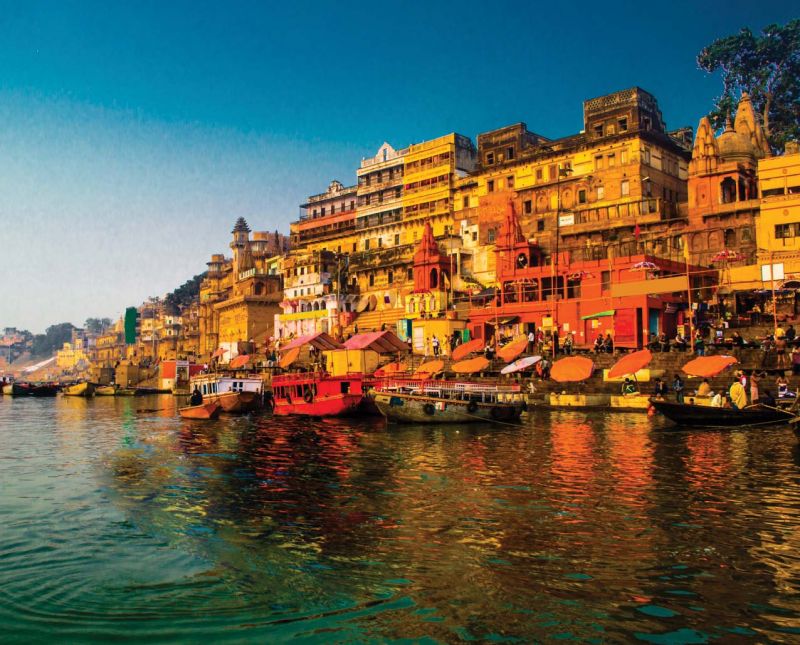 The next day we set out on an early morning private boat ride across the ghats. “84 ghats in the Ganga,’’ said the guide with much amazement!  What is particularly significant is the ManiKarnika ghat where you will find pyres lit here for 24 hours. The experience as we waded through the waters, lit diyas and sought blessings from the River Ganga cannot be articulated entirely. We saw the rising sun, which emerged from the Ganges and lit up the grey skies. With continuous bhajans playing around the ghats, we ended the ride with hot chai off – spiced with enough masala to waken us up. On our return to the hotel, we squeezed in some time to shop for Varanasi’s most famous weave: Banarasi. Dupattas, sarees, fabrics – our travellers were spoilt for choice with everything on offer! Of course, we returned back with many more bags than our hotel concierge saw us depart with early morning.

The evening was rather enlightening. A hidden alleys walking tour, considered a hidden gem, with the first stop being Moksh Bhavan or Salvation House. This is where a lot of people choose to spend their final days before they believe their end has come on Earth. With the priests doing final rites, bhajans played, this visit left all of us with a peculiar sense of amazement. Maybe at the thought of people knowing when their end is near. Maybe with the idea of celebrating life as we know it.

Next, we visited a dilapidated 2000-year old temple, after which we visited a hole in the wall chaat stop – Kashi Chaatwala. Some delicious aloo and tamatar chaat, laced with the sweet sugar syrup, these Varanasi staples were a huge checkmark on our must-visit list! The finale of the walking tour was an evening on a boat deck, watching the aarti, surrounded by a thousand people. Priests with immense dexterity carried thalis with 100 lamps. Next, hunger pangs began to ring and we were beyond satiated by the Satvik Varanasi and Lucknow Awadhi thalis at the Taj Ganges.

The next day, we well and truly observed Dev Deepavali. With 2 lakh people arriving in Varanasi on this auspicious occasion, all 84 ghats are lit up with clay lamps – a sight that leaves you absolutely stunned. While the traffic on this day can prove to be maddening, with narrow roads, all of it can be quickly forgotten once you begin watching the  lighting up of diyas and festivities begin. Two and a half hours of floating across the Ganges – ghat after ghat, lighting eco-friendly diyas, pouring our wishes and prayers silently as we placed our wishes with floating diyas in the river, we collectively sighed. A sigh that appreciated everything around us. A sigh of counting our blessings and gratitude. The banks were lit up, but so were our eyes at the sheer delight we experienced. Celebrations continued on a rooftop restaurant, where we chatted through the night eating ridiculous amounts of dishes of paneer that ended in quintessentially Varanasi style – Banarasi paan!

The next morning we drove down to the Buddhist town of Sarnath, where Lord Buddha is believed to have given his first sermon. The monastery was created with a Bodhi tree – where if the leaves fall, one must keep this lucky blessing carefully. Following this, we visited the quaint village of Sarai Mohana – home to weavers of Banarasi silks. Several large companies have adopted weavers here, to keep the traditional craft alive.

We then returned to Varanasi, shared stories of everyone each of us met in a town discovered by few and known by even fewer, often gone unheard by most who appreciated the Banarasi weave.

This trip was a feast for all senses – taste of Lucknowi mutton and Benarasi chaat, sights of thousands of aartis, smell of holy incense sticks, sound of bhajans, and the feeling you may ask? Of gratitude. Like threads woven together, travel weaves scores of memories and adds colour to all our lives.

That’s why i guess they say, Varanasi – truly a place where one celebrates both Life and Death with Gratitude!

Why the bad stuff sticks

Diversity’s Perri Kiely on bullying, growing up in the spotlight and online comments