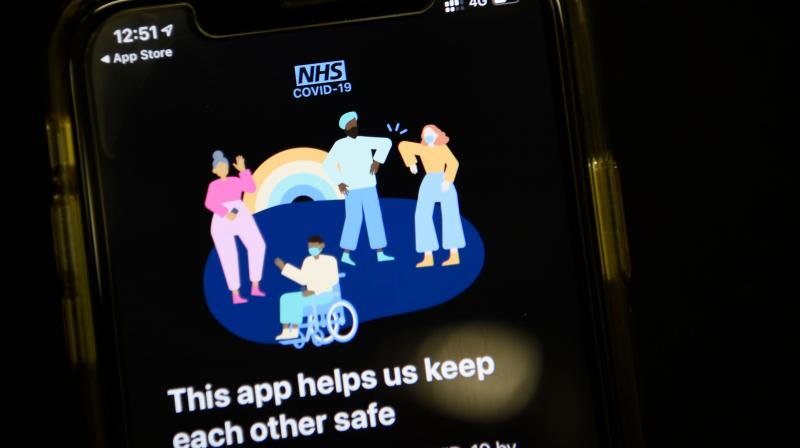 London: The British government on Thursday finally launches its troubled smartphone app to help track the coronavirus in England and Wales—four months behind schedule and with cases once again surging.

The revamped app, which had first been planned for late May, uses Bluetooth technology to alert users if they spend 15 minutes or more within two metres (six feet) of another user who subsequently tests positive for Covid-19.

The tool, which will be available in numerous languages on Apple iPhones and various phone brands that use Android operating systems, offers other functionality including booking a test and checking into venues using QR codes.

It relies on software developed by US technology giants Apple and Google, and in a bid to assuage privacy concerns, holds all the data generated on people’s phones and allows the information to be deleted easily.

The app is being released behind schedule following months of troubleshooting on the Isle of Wight, off the southern English coast, in an east London district, Newham, and among another set of volunteers.

The state-run National Health Service (NHS), which has developed the tool in-house, abandoned its initial effort to create a more centralised data collection system after it was beset by issues.

The embarrassing U-turn followed warnings from tech experts it would be less effective and that it should have switched to the Apple-Google software earlier.

Health Secretary Matt Hancock said the reworked tool was “an important step forward in our fight against this invisible killer”.

“We have worked extensively with tech companies, international partners, and privacy and medical experts—and learned from the trials—to develop an app that is secure, simple to use,” he said.

The Scottish government launched its own app earlier this month, while Northern Ireland rolled out its smartphone tracing tool in August.

However, some have questioned how effective the NHS app will be.

Independent charity the Health Foundation noted on the eve of its release that results from pilot tests over the summer months were yet to be published.

“Any data on the pilots that took place in August have been notably absent, leaving major questions over the app’s effectiveness unanswered,” it said.

Various coronavirus tracking applications which have emerged around the world—often relying on the same Apple-Google tech—have had mixed success to date.

Many have encountered challenges, from privacy concerns to technical glitches and disappointing take-up.

British officials hope 10-30 percent of the population will download the English and Welsh app, in line with other countries’ experiences and the pilot tests, which they insist would help stem virus transmission.

The government launched prime-time television adverts Wednesday with the slogan: “Protect your loved ones. Get the app”.

But confidence in Prime Minister Boris Johnson’s handling of the pandemic has plummeted, with the country’s struggling testing system denting people’s faith.