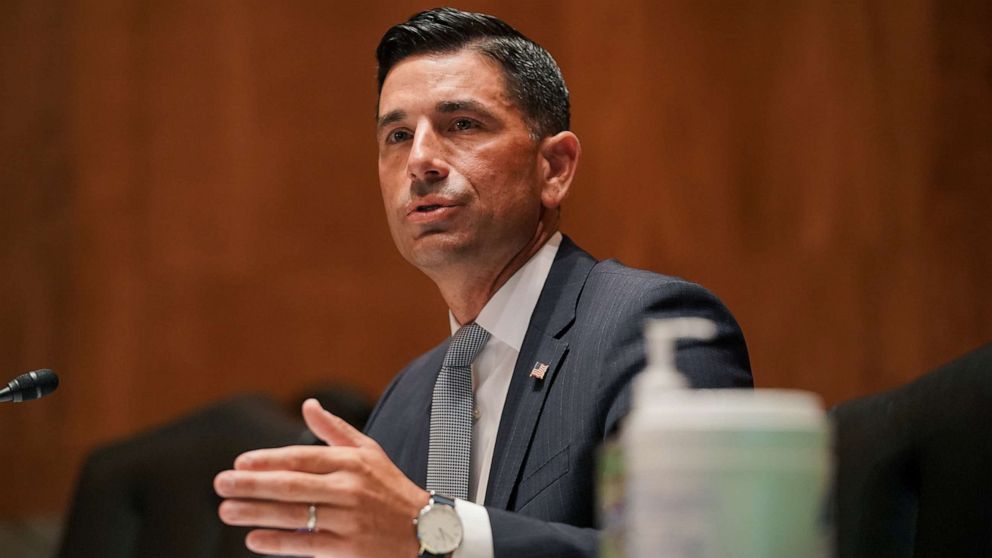 Acting Homeland Security Secretary Chad Wolf defended the DHS Wednesday, saying at his confirmation hearing before the Senate Homeland Security and Governmental Affairs Committee that a whistleblower’s claims against the department are “patently false.”

Former chief of intelligence at the DHS, Brian Murphy, filed a whistleblower complaint describing repeated instances in which he claims the Trump administration sought to “censor or manipulate” intelligence for political purposes, including information about Russian efforts to interfere in the 2020 elections.

The document, a copy of which was obtained by ABC News, alleges a pattern of behavior ranging from “attempted abuse of authority” to possible violations of federal law perpetrated by some of the administration’s senior-most law enforcement and intelligence officials.

President Donald Trump formally nominated Wolf for the secretary job in August, but he has been serving as the acting secretary since November. If confirmed by the Senate, Wolf would be the first confirmed DHS Secretary in over a year.

Wolf was also adamant on Wednesday that he did not withhold an intelligence report on disinformation on former Vice President Biden’s mental health.

ABC News previously reported that DHS withheld publication of an intelligence bulletin warning law enforcement agencies of a Russian scheme to promote “allegations about the poor mental health” of Biden.

Wolf, asked specifically if he considers Russia to be advancing propaganda against Biden, said there are three countries are a concern.

“On everything that I’ve seen that there are three nation states that we have to be very concerned about one is Russia, one is China, and one is Iran and they all have different ways in different motivations of doing this,” he said.

On immigration, Wolf has been a loyal supporter of Trump’s agenda even as U.S. Immigration and Customs Enforcement, which falls under DHS, faces continued scrutiny over medical care in civil detention facilities.

Democrats on the House Homeland Security committee announced last week the start of a new investigation into allegations from a detention facility nurse, including reports that ICE detainees in the Irwin County Detention Center were subjected to hysterectomy operations without their full understanding or consent.

Wolf said he looks forward to this review.

“I look forward to that investigation. Some of what we have seen thus far on some of the most, I would say, dramatic allegations in that complaint regarding certain medical procedures,” he said. “Some of the facts on the ground and the fact that we have seen do not back up those allegations.”

ABC News has not independently confirmed the allegations.

A new report from the House Committee on Homeland Security found that officials used the threat of isolated confinement in order to maintain control over detainees at the River Correctional Center in Louisiana and Otero County Processing Center in New Mexico.

Detainees who had submitted repeated medical requests or engaged in hunger strikes were segregated as a form of discipline, according to the report.

The findings suggest that officials at three facilities ignored mental health warnings from detainees by minimizing some suicide red flags despite evidence of self harm. Evidence of suicide attempts at Otero, River, and the LaSalle ICE Processing Center in Louisiana were written off as not “serious,” according to the report.

Wolf and the department’s number two, Ken Cuccinelli, have also been in the hot seat after the Government Accountability Office found they were unlawfully appointed to their current roles.

Wolf said that he disagrees with the logic used by the GAO and said its decision is non binding.

“We’re certainly aware of the GAO’s opinion regarding the order of succession at the department I will say that we very strongly disagree with that opinion,” Wolf said. “I’ll continue to say I respect the role that GAO plays. But that again does not dismiss the fact that we believe they have a faulty decision in the legal logic that they used is very inaccurate.”

The DHS Inspector General declined to take action against the two leaders.

“While DHS OIG does not have a strict policy against reviewing matters that are the subject of litigation, under the particular circumstances presented it would be pointless for DHS OIG to add its voice to what has become a bitter inter-branch disagreement,” the IG wrote in a letter to members of the House Homeland Security Committee. “Neither GAO nor DHS OIG can issue a binding determination on that issue, but a federal court can and probably will.”

Wolf’s profile rose earlier this summer when he sent federal agents — against the wishes of Oregon Gov. Kate Brown and Portland Mayor Ted Wheeler — to quell violence occurring outside the federal courthouse in Portland, Oregon, during protests over police brutality and racial injustice.

“We will be happy to provide resources to bring this violence to an end … across the ideological spectrum left or right, the violence needs to end.” Wolf said in August on ABC’s “This Week,” adding a message to local officials, “If you see this activity, take early action, bring law and order to your streets, and we can address and really avoid some of the violent activity that we’re seeing.”

Jobless benefits for millions are expiring as Washington moves on