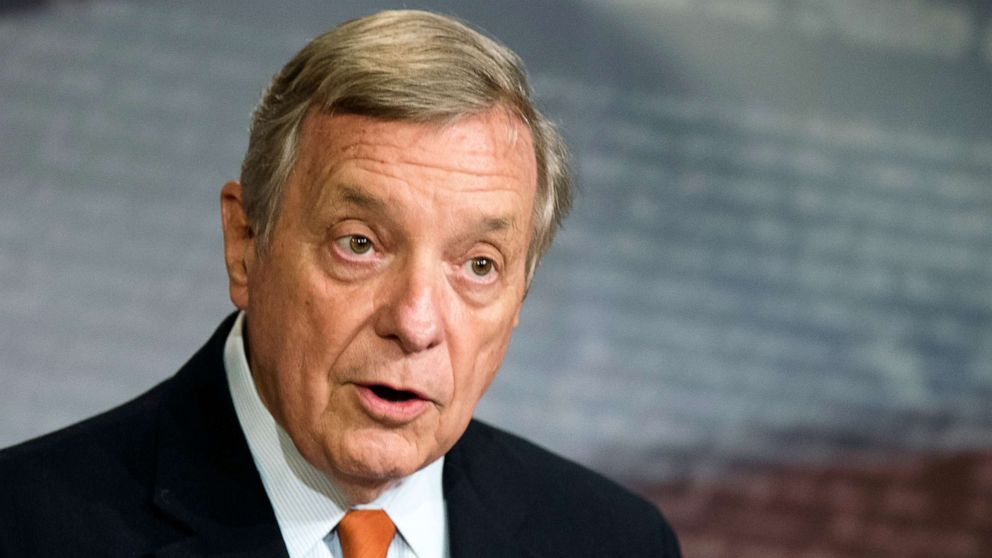 Sen. Dick Durbin, D-Ill., the Senate Democratic whip, on Wednesday pushed back on calls for Democrats to add more justices to the Supreme Court next year, if they retake the Senate and White House, as retribution for Republicans’ plans to fill Justice Ruth Bader Ginsburg’s seat just weeks from the election.

“There’s no serious conversation among my colleagues about this prospect. It is speculative, it is in the future, if at all,” Durbin, the second-ranking Senate Democrat, told ABC News Chief White House correspondent Jonathan Karl and Political Director Rick Klein on the “Powerhouse Politics” podcast.

“We’re focused on the job at hand which is to try to make certain that whoever fills this Supreme Court vacancy is someone who will respect the power of the court when it comes to things as basic as the health care of Americans. So this notion of looking at some structural change in the court I can just say is not a serious topic on Capitol Hill at this moment,” Durbin said.

Senate Majority Leader Mitch McConnell, R-Ky., appeared to lock in enough Republican support this week for his plan to advance President Donald Trump’s nominee to the Supreme Court through the Senate, with just Sens. Lisa Murkowski, R-Alaska, and Susan Collins, R-Maine, opposing the push to fill the vacancy so close to the presidential election.

Durbin admitted that Democrats are essentially powerless to stop the confirmation process at this stage, and can do little more than disrupt committee hearings and delay the Senate Judiciary Committee’s consideration of a nominee by one week, through procedural tactics.

“We can certainly delay things, but only for limited periods of time,” he said. “It is possible … that some other Republican senators will have second thoughts as this progresses, but at this point it doesn’t look very promising.”

In the days following Ginsburg’s death, Democrats have accused Republicans of hypocrisy, pointing to their refusal to consider Judge Merrick Garland, President Barack Obama’s nominee to fill the seat of the late-Justice Antonin Scalia, eight months before the 2016 presidential race.

Republicans have largely rejected that criticism, noting that their party controls the White House and Senate, while Democrats controlled the White House four years ago.

The potential opportunity for Republicans to secure a conservative majority on the Supreme Court for decades has incensed liberals, fueling calls from activists and progressives in Congress for Democrats to radically change the Senate — through adding representation for the District of Columbia and Puerto Rico and ending the 60-vote filibuster for legislation — and packing the Supreme Court at the earliest opportunity.

Durbin, who endorsed statehood for Washington, D.C., and Puerto Rico, said lawmakers on both sides of the aisle have discussed potential changes that would not be as sweeping as eliminating the legislative filibuster — which requires 60 votes to advance proposals through the chamber, and is one of the key rules differentiating the Senate from the House of Representatives.

“We understand that there are ways to change the rules, one of those is to eliminate filibuster and make the Senate look like the House, but there are lots of gradations and lots of possibilities out there, short of what I just described,” he continued. “There’s going to be some serious thought about how effective the Senate is and can be under the current rules.”

The veteran Illinois lawmaker, who served with both Obama and former Vice President Joe Biden in the Senate, encouraged the Democratic presidential nominee to draw a sharp contrast from Trump on the debate stage next week in their first meeting.

“We have gone through a miserable experience with this president, the current president’s personality,” Durbin said. “Joe Biden is such a contrast and offers the hope that we can start to bring this country back together again. I hope that’s the image that comes through the debate.”

The 2000 presidential election, on steroids