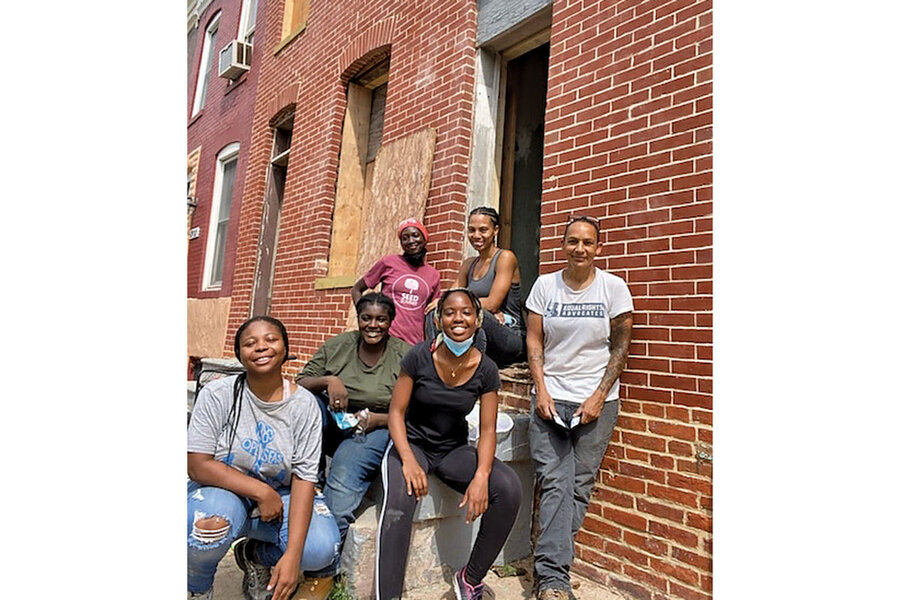 In Baltimore, as with other communities in the United States, Black homeownership has a history of being suppressed by law and practice. Yet “housing is seen as a platform for every other kind of programmatic path forward,” says Robert Fischer, co-director of the Center on Urban Poverty and Community Development at Case Western Reserve University.

Where old homes are not torn down, a common strategy for neighborhoods with a high proportion of unused buildings has been to redevelop them for new people to move in, says Professor Fischer. “That has further disenfranchised the people that have been the long-standing residents of these neighborhoods.”

As a result, there’s a growing interest in redeveloping neighborhoods in such a way that the current residents can remain and thrive, he says.

Urban renewal has played an important – and at times, controversial – role in the U.S., explains Marc Morial, president and CEO of the National Urban League. But “replacement housing – particularly in the form of high-rise housing for low-income tenants – has not been successful.” These “structures might in themselves be dehumanizing,” he writes in an email.

More promising, he says, are adaptive reuse strategies – like Black Women Build-Baltimore – that “bring life back to an area, financial resources back to the local marketplace, and safety back to the neighborhood.” Such strategies allow old homes “to become critical components of urban regeneration.”

Black Women Build was the culmination of Ms. Halstead’s winding path through a childhood in Iowa, to fighting wildfires in Oregon, to living in a commune in Belgium and on an ashram in India. She found her way back to the U.S., wanting to create communal living space for her friends, but she didn’t know how to build.

So she took a carpentry class at a community college, and then got a job as an electrician’s apprentice in Antarctica. After more than a decade as a union carpenter back in the U.S., she went to law school and had a brief stint working for a nonprofit in Washington, D.C. Ms. Halstead still found herself seeking ways to feel fulfilled.

She finally landed in Baltimore. “I really just found it a perfect place to put my skills together and begin Black Women Build,” she says. ”All those various experiences I’ve had really shaped how I think about building community, and the way that I wanted to do it.”

Spending time with people, sharing space, and learning together are integral to the Black Women Build approach. It “deepens a sense of community and common understanding of things,” she says. This begins with conversations as she works with trainees. As they discuss life experiences and challenges they’re working through, Ms. Halstead might share a referral to behavioral health therapists, for example, or encourage bringing a lunch from home as a healthier and cheaper option than buying it from the corner store.

But building homes isn’t all there is to the work in the neighborhood. Making the existing buildings livable and available to people already in the community is the other half, says Ms. Henderson.

In the Old West Baltimore Historic District, that means facing its history as a redlined neighborhood. A student at the University of Maryland School of Social Work earning her second master’s degree, Ms. Henderson has examined redlining maps, and she finds that not much has changed in the area. She says it can be heartbreaking to hear stories of disenfranchisement, asking, “What have we done collectively to address that? I see [Black Women Build] as a form of resistance to what has been … happening for generations.”

Programs like Black Women Build-Baltimore, many with social justice in their platforms, point a path forward, says Dr. Fischer of Case Western Reserve. “The idea of finding a way to turn these properties and bring back homeownership in some of these neighborhoods is an antidote to an illness that we created in the 1930s for many distressed neighborhoods.”

Although potential funders always want to know how Black Women Build-Baltimore can be scaled, Ms. Halstead says that’s not her focus. “That’s not what I ever wanted to create. I want to ensure that the person I’m working with understands the house, understands how to take care of it, knows their neighbors, feels a part of … the community in which they live, and [knows] what they want to bring to it.”

By interacting on a personal level with someone, you can find their strengths, she says, and help them channel those strengths into the work at hand. From learning trades, to modeling healthy eating, to talking about overcoming challenges, to financial literacy – Ms. Halstead works alongside each woman in the program, each step of the way. “It’s … about [learning] how we came to be” through conversation, but it’s not prescribed, she says. “It’s really organic.”

Trainees work about 32 hours a week, for which Black Women Build provides an hourly stipend. Most women in the program are wage earners elsewhere; one leaves an hour early at 3 p.m. to work her job from 4 to 9 p.m.

It’s important that the women feel valued for taking the time to learn new skills, showing up, and “believing in a future where they’re going to be a part of something that’s actually bigger than themselves,” says Ms. Halstead. “Black women have more to offer … than our sweat.”

Her own convictions aside, persuading the city to hand over several abandoned houses to begin with rather than razing them was no small feat. To Ms. Halstead, it’s a no-brainer: “The cost to stabilize these houses is basically the same cost to tear them down. So let’s get into preservation instead of demolition.” It helped her credibility that she had received a Baltimore fellowship available to people seeking to use their professional and life skills to aid marginalized communities.

It may be difficult to fathom how people could one day want to live in abandoned neighborhoods again, but Ms. Halstead sees the potential. “These aren’t just wasted houses and wasted memories,” she says.

Even today, as the founder of a nonprofit with decades of experience in the trades, Ms. Halstead still faces bias and hostility. One tradesman told her she “needs a man around” the job site because men might not want to listen to her.

She remains unfazed. If someone doesn’t want to listen, she says, then it’s not the right job for them. But the concept of women’s empowerment is overused, Ms. Halstead says. It’s a matter of practicality. “I’m just like, ‘Why not? Why can’t she swing a hammer? Why can’t she tile the bathroom?’” Being skilled in the trades makes sense for women, she says. The pay is high, and learning the skills is a way to become self-sufficient. “I didn’t take a vow of poverty,” she says, “just because I am a Black woman.”

Editor’s note: This story was updated to correct Ms. Halstead’s apprenticeship and the spelling of Ms. Robertson’s name.