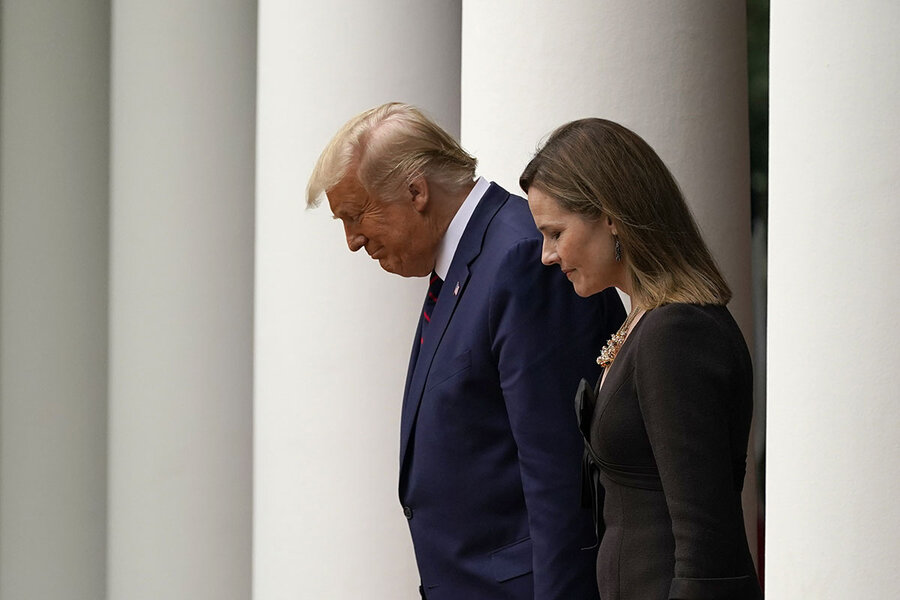 However, he adds, it’s important that the nature and purpose of those questions is focused on clarifying that the judicial nominee understands the role of a judge is to decide legal questions, not policy or religious questions. “What’s not appropriate – and this happened to some extent last time around, in my view – is to single out religious nominees, or for that matter, nominees from a particular religion, and to suggest that their particular religion makes them somehow unusually suspect.”

The last time around was in 2017, when the Senate considered President Donald Trump’s nomination of then-Professor Barrett as an appeals court judge. Democratic senators, most notably Sen. Dianne Feinstein of California, raised concerns about how her faith would shape her interpretation of the law.

“Why is it that so many of us on this side have this very uncomfortable feeling that, you know, dogma and law are two different things and I think whatever a religion is, it has its own dogma,” said Senator Feinstein. “The law is totally different and I think in your case, professor, when you read your speeches, the conclusion one draws is that the dogma lives loudly within you. And that’s of concern when you come to big issues that large numbers of people have fought for years in this country.”

Some saw such questions as reminiscent of anti-Catholicism attitudes prevalent in earlier years, as well as a violation of the Constitution. Article VI states, “The Senators and Representatives before mentioned, and the Members of the several State Legislatures, and all executive and judicial Officers, both of the United States and of the several States, shall be bound by Oath or Affirmation, to support this Constitution; but no religious Test shall ever be required as a Qualification to any Office or public Trust under the United States.”

This is the only explicit reference to religious liberty in the original Constitution, before the First Amendment was added as part of the Bill of Rights several years later in 1791. Although the clause received unanimous support at the Constitutional Convention, it became a controversial topic during ratification, with some Americans considering it “too risky” to allow Catholics or non-Christians to hold office.

“No religious test” in spotlight

The “no religious test” clause has received more attention in recent years, particularly after several religious judicial nominees, including William Pryor, faced resistance in their 2003 hearings. A 2007 Harvard Law Review article argues that the clause “does not forbid officials – or the general citizenry – from considering or even inquiring into an individual’s religious beliefs when deciding whether to nominate, confirm, or vote for the individual.”

Jud Campbell, an associate professor of law at the University of Richmond School of Law who specializes in First Amendment law and constitutional history, agrees that there is no constitutional limit on questions about a judicial nominee’s religiosity. However, he urges caution not only in questioning religious nominees about how their religiosity would affect their interpretation of the law, but also in questioning LGBTQ nominees about how they would handle cases with LGBTQ litigants, or Black judges dealing with Black litigants.

“Obviously those sorts of questions have the capacity to be deeply harmful to the sort of inclusivity that we want to promote as a people and a constitutional culture,” says Professor Campbell. “Those are not the sort of questions that white male Protestants get.”

One reason that white male Protestants don’t get those questions very often in Supreme Court confirmation hearings is that only two have been nominated in the past 30 years – David Souter, who served from 1990 to 2009, and Neil Gorsuch, who was baptized Catholic and went to Jesuit schools but now identifies as Episcopalian.

Mr. Gorsuch sits on the court with two Jewish justices and five Catholic justices, including Obama nominee Sonia Sotomayor. Judge Barrett would make the sixth Catholic on the nine-member court in a country where Catholics make up about 20% of the population but play an outsize role in the conservative legal movement. Leonard Leo, co-chairman of The Federalist Society and a member of the Knights of Malta, a Catholic order, has been credited with spearheading a surge in Catholic Supreme Court justices in recent years, according to a profile in The Daily Beast.

“In this country, having six or almost seven judges Catholic at the same time when this country is becoming less Christian, more secular … I believe Catholics should behave responsibly and at least do something to reassure [Americans] that this is not part of a theocratic or integralist project,” says Massimo Faggioli, a relatively liberal Catholic theologian at Villanova University in Pennsylvania. “I can understand why non-Catholics are not asking that question, because they don’t want to be accused of being anti-Catholic.”

Even Professor Faggioli has come under fire as anti-Catholic for raising what his critics characterized as old tropes about dual loyalties in a Politico column last week. In the piece, he encouraged the Senate Judiciary Committee to examine Judge Barrett’s reported connection with the People of Praise and any impact her commitment to the group may have on her spiritual and intellectual freedom.

People of Praise is ecumenical but largely comprised of Catholics and is part of a broader movement of charismatic groups that have sprung up in the past few decades. According to the group’s website, after three to six years of instruction and participation in the community, members make a lifelong commitment, or covenant, to their fellow worshippers and to God. The group has come under particular scrutiny for following the admonition of St. Paul that wives should be subservient to their husbands, as well as for leaders’ reported influence on personal decisions such as dating and marriage.

Judge Barrett does not appear to have directly addressed her involvement in the group, though in her acceptance speech on Sept. 26 she made a point of noting that her kids all thought her husband ­– a lawyer in private practice – was the better cook.

With President Trump looking on in the Rose Garden, she paid tribute to Ruth Bader Ginsburg, the liberal icon and women’s rights defender whom she would be replacing, calling her “a woman of enormous talent and consequence, and her life of public service serves as an example to us all.” Judge Barrett also highlighted the warm friendship that her own mentor and former boss, the late Supreme Court Justice Antonin Scalia, had shared with Justice Ginsburg, despite their differing views.

Judge Barrett did not mention her own faith at all in her speech. But when asked by then-Sen. Orrin Hatch in her 2017 confirmation hearings how she would respond to Democrats’ concerns about the impact of her faith on her judicial decisions, she replied: “Senator, I see no conflict between having a sincerely held faith and duties as a judge.”

“And were I confirmed as a judge, I would decide cases according to the rule of law from beginning to end,” she continued.

And what of issues on which the Roman Catholic Church’s position differs from that of the law? Nearly two decades earlier, as a Notre Dame law student in 1998, then-Amy Coney co-authored a law review article on whether Catholic judges should recuse themselves from presiding over cases involving capital punishment, which is opposed to the church’s teachings. The article, which also mentioned other areas of potential conflict such as abortion, concluded, “Judges cannot – nor should they try to – align our legal system with the Church’s moral teaching whenever the two diverge. They should, however, conform their own behavior to the Church’s standard.”

“In the rare circumstance that might ever arise – I can’t imagine one sitting here now – where I felt that I had some conscientious objection to the law, I would recuse,” she told Senator Hatch and his colleagues. “I would never impose my own personal convictions upon the law.”

The Senate approved her nomination 55-43, with two Democrats – Joe Donnelly of Indiana and Joe Manchin of West Virginia, both of whom are Catholic – joining the Republican majority.

This time may be harder.