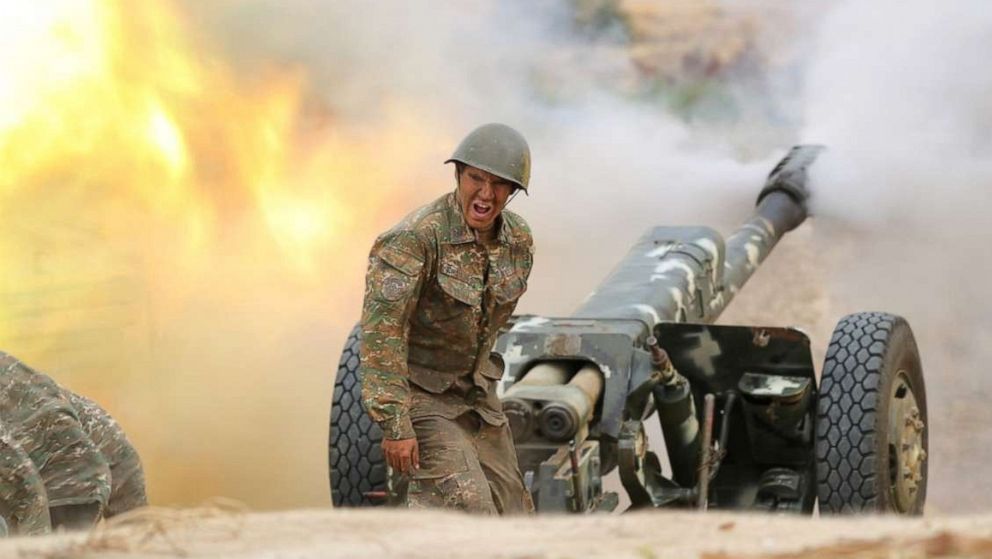 MOSCOW — Armenia has accused Turkey of shooting down one of its warplanes during fighting around the disputed region of Nagorno-Karabakh, as fears continue that a conflict between Armenia and Azerbaijan could escalate into a full-scale war.

Armenia’s defense ministry on Tuesday said a Turkish F-16 had shot down an Armenian SU-25 fighter jet in Armenian airspace, killing the pilot. A ministry spokesperson said the Turkish jet took off from an airbase inside Azerbaijan and had been providing cover for Azerbaijani aircraft attacking Armenian positions.

The incident came as heavy fighting between Armenia and Azerbaijan continued for a third day around Nagorno-Karabakh, deepening worries it could become a larger war pulling in regional powers and destabilizing an important energy corridor. The possible shooting down of the aircraft further escalated tensions between Armenia and Turkey, which backs Azerbaijan and which Armenia has already accused of providing military support in the current fighting.

The United Nations Security Council planned to hold an emergency meeting behind closed doors on Tuesday to discuss the violence, which has killed dozens and wounded hundreds already. The fighting is the heaviest in the decades-old conflict since the 1990s, when the two sides fought a bloody war. The Security Council meeting was requested by five European nations, Belgium, France, Germany, Britain and Estonia.

The current military conflict over Nagorno-Karabakh, a mountainous enclave between Armenia and Azerbaijan, dates back to the fall of the Soviet Union. As the two countries declared independence, the enclave’s Armenian population sought to unify with Armenia and war broke out, causing 30,000 casualties and displacing hundreds of thousands of people. Despite a ceasefire brokered by Russian in 1994, the conflict was never resolved and it has regularly seen clashes since. The enclave is now ruled by an Armenian-backed government and is majority Armenian, after hundreds of thousands of Azeris were displaced. The territory though is still recognized internationally as the territory of Azerbaijan, which has never given up its claim to it.

The two countries fought a five-day war in 2016 and most recently there were intense skirmishes in July.

The fighting this time though is far heavier than anything since the 1990s, according to civilians on the ground and independent analysts, and the risks of its turning into a larger war are much higher.

Azerbaijan and Armenia on Tuesday both accused each other of firing directly into their countries’ territory beyond the Nagorno-Karabakh.

Armenia’s defense ministry on Tuesday said a civilian bus in the town of Vardenis, more than 12 miles from Nagorno-Karabakh caught fire after it was hit by an Azerbaijani drone. Armenia’s foreign ministry reported a civilian was killed in the town, the first death reported in Armenia proper.

Angela Frangyan, a filmmaker in Nagorno-Karabakth’s capital Stepanakert told ABC News by phone on Tuesday morning that residents could hear constant shelling and air raid sirens. She said many women and children had spent the night in bomb shelters.

Frangyan said the fighting in its scale and intensity was far more than anything the region had seen since the 1990s, noting that in the 2016 war they had not felt at risk in the city.

“It is very, very different,” Frangyan said. She said adding to the terror on the ground was the extensive use of drones by Azerbaijan. “It’s totally a drone war,” she said.

There are concerns a full-scale war could pull in regional powers Turkey and Russia. Moscow has close ties with both Armenia and Azerbaijan and traditionally plays a mediating role during clashes between them. But Russia also has a formal security pact with Armenia and in recent years Azerbaijan has moved closer to Turkey, placing the Kremlin in an uncomfortable position.

Turkey has long backed Azerbaijan, which it has close ethnic ties with, but it has taken a more aggressive stance than usual on the current fighting. This week Turkey’s president Tayyip Recep Erdogan said “it is time to end Armenia’s occupation” and demanded Armenia withdraw from places considered Azerbaijan’s soil.

Armenia has already accused Turkey of providing Azerbaijan with weapons, military advisers and warplanes. There are also reports that Turkish-controlled Syrian rebel fighters have been deployed to help Azerbaijan.

Turkey has already used such fighters in Syria against Kurdish forces and most recently in Libya, where it supports the country’s government against rebels-backed by Russia.

Russia “urges all countries, especially the partner countries, such as Turkey, to do everything possible to persuade the opposing parties to stop fighting and resume a peaceful settlement of this long-standing conflict through political-diplomatic methods,” Peskov said.

Another major regional power, Iran has also called on both sides to de-escalate, as has the European Union. Germany’s Chancellor Angela Merkel has pushed for “an immediate ceasefire and a return to the negotiating table” in phone calls with the leaders of Armenia and Azerbaijan, her office said Tuesday, the AP reported.

The United States has made similar calls. U.S. Secretary of State Mike Pompeo said during a visit to Greece that “both sides must stop the violence” and work “to return to substantive negotiations as quickly as possible.”