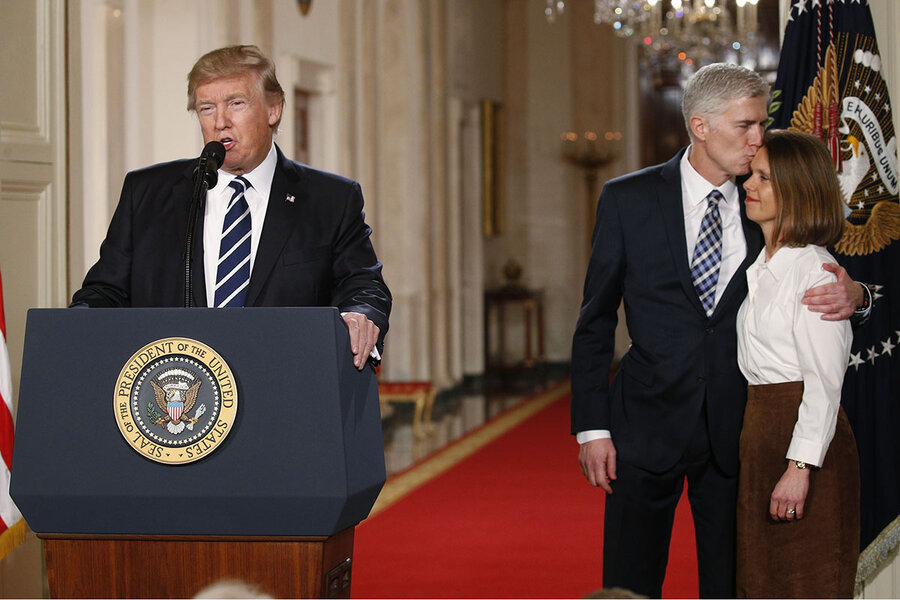 With a presidential election less than five weeks away, and a new term at the U.S. Supreme Court just over a week away, President Donald Trump says he will, in a matter of days, announce his third nominee to the high court.

The funeral for Justice Ruth Bader Ginsburg, whose seat he would be filling after she died last week, is not scheduled until next week, but President Trump and other Republican Party leaders have made clear their intent to return the court to its full complement of nine justices as soon as possible.

The announcement is certain to provoke a fierce and partisan confirmation battle in the U.S. Senate. But if the nomination is successful, it could transform the high court in a way perhaps not seen in close to a century, securing a two-thirds majority of conservative jurists that could advance conservative causes like regulating abortion, expanding gun rights, and reining in federal regulations at a speed and scope of its choosing.

To date, President Trump’s two other appointments – Justices Neil Gorsuch and Brett Kavanaugh – have replaced other members of the court’s right wing. But replacing Justice Ginsburg, for decades a liberal stalwart of the court, would represent a much starker rightward turn.

It would likely see influence shift between the justices – namely away from Chief Justice John Roberts, who would cease to be the court’s ideological center. The conservative justices do not see eye to eye on every issue, a dynamic that could moderate decisions they reach in some areas of the law. But for the most part, it could be this reinforced conservative majority that would be shaping U.S. law for the next 15 or 20 years. The only questions would be how radically, and how quickly, the court moves.

“It’s hard to know how uniformly more conservative the court would become until you know who is appointed,” says Mary Ziegler, a professor at Florida State University College of Law. “But you can expect a more conservative court, and a more quick, or more radical, transformation of the court’s doctrinal views.”

Liberal justices have not held a majority on the Supreme Court since the Warren court of the 1960s. But since then, particularly in ideologically divisive cases, moderate conservatives like Justices Sandra Day O’Connor and Anthony Kennedy have steered the court’s direction.

Chief Justice Roberts became the center of the court after Justice Kennedy retired in 2018, and he has regularly sided with his conservative colleagues since. Yet the chief justice, who has a strong belief in changing the law incrementally and keeping the court above the political fray, has unexpectedly joined his liberal colleagues in a few significant decisions as well. In 2019, for example, he wrote the plurality opinion blocking, on procedural grounds, the addition of a citizenship question to the 2020 census. And this past summer he voted to strike down a Louisiana law restricting abortion access.

Should President Trump replace Justice Ginsburg, then his past two appointments – Justices Gorsuch and Kavanaugh – would probably become the median justices on the court, experts say. And more conservative members like Justice Clarence Thomas, who have historically been on the fringes, could see their influence grow.

The president “will transform the 5-4 John Roberts court to the 6-3 Clarence Thomas court,” tweeted Mike Davis, head of the Article III Project and an advocate for President Trump’s judicial picks.

There might be no definitive “swing” justice, but the reinforced conservative majority would still have disagreements. How far and how fast the court moves to the right would be moderated, if it’s moderated, by the chief justice and, perhaps, Justices Gorsuch and Kavanaugh.

“For conservatives, there’s still a pathology to go to the middle,” says Josh Blackman, a professor at the South Texas College of Law. “Liberal justices do what they need to do, but conservative justices tend to want to play ball.”

There are some recent examples to the contrary, including liberal Justices Elena Kagan and Stephen Breyer joining with conservatives in some religious liberty cases. But there have also been times when President Trump’s two appointees have defied some expectations. In the past term, Justice Gorsuch joined the liberals in voting to expand employment protections for LGBTQ Americans, and in another landmark case, both Trump appointees concurred with a ruling that President Trump can’t block access to his personal financial records.

And Justice Kavanaugh could prove to be a pivotal vote on one of the issues of most immediate concern to liberals: abortion rights.

Almost from the day it was decided, there have been arguments that Roe v. Wade – the 1973 ruling that established a constitutional right to abortion – was poorly reasoned and should be overturned, particularly from conservatives. (Some liberals, including Justice Ginsburg, said the ruling did too much too quickly.)

Whether a court with six conservative justices would directly overturn Roe is unclear, and would probably require Justice Kavanaugh’s vote. But abortion rights would almost certainly be restricted further, says Professor Ziegler, and restricted at a faster pace than the court has followed in recent decades.

So if Roe does get overturned, “you certainly couldn’t say that it happened overnight,” says Ilya Somin, a professor at George Mason University’s Antonin Scalia Law School.

Indeed, the speed and scope with which the judiciary shapes the law are determined by multiple factors. Judges don’t shape legal doctrine alone, Justice Ginsburg said in a 1992 speech, but also “participate in a dialogue with other organs of government, and with the people as well.”

Strengthening executive power and expanding the Second Amendment are other areas of the law that could change rapidly with a six-justice conservative majority on the court, experts say. The question would be if enough justices agree that the law needs to change quickly and broadly, despite what the public or other branches of government might think.

“If you think a precedent is really awful, then it’s entirely reasonable to think that it has to go, even if there are some risks involved,” says Professor Somin. “When it comes to other issues I think it depends on the issues, the magnitude of the risk, and so on.”

Whether or not the public agrees with the court is another question, and how the justices weigh that institutional risk would in large part define a six-justice conservative majority’s decision-making.

While some conservatives criticized the court’s rulings last term – including President Trump, as well as Vice President Mike Pence, who called Chief Justice Roberts “a disappointment to conservatives” – the court came out with its highest public approval rating since 2009.

Approval of the court rose sharply among Democrats in particular, likely due in part to the rulings on LGBTQ rights, the Louisiana abortion law, and the Obama-era deportation program. Some experts believe that, with a stronger conservative majority on the court, even those small liberal wins could disappear.

“Without that you have a court that’s pulling more towards a Clarence Thomas approach,” says Kimberly West-Faulcon, a professor at Loyola Law School in Los Angeles. “And if you have five justices on that [approach] you get there faster.”

“It’s difficult to overstate the doctrinal significance of President Trump appointing a new justice to the court,” she adds.

Two historical eras have been referenced by court watchers since Justice Ginsburg’s death: the New Deal era of the 1930s and ’40s, and the 1850s. Both eras featured Supreme Court justices named in an earlier era and at odds with the beliefs and priorities of the current one, and in both the disconnect helped fuel some of the most turbulent periods in U.S. history.

If President Trump and the Republican-controlled Senate confirm his third Supreme Court justice, the United States could enter a similarly jarring and divisive period, some experts warn.

“A court chosen and confirmed by Republicans elected predominantly by White voters, a clear majority of them Christians, could write the rules for years while both of those groups are continually shrinking as a share of society,” wrote Ronald Brownstein, a senior editor at The Atlantic, for CNN.

“That could be a recipe for explosive conflict.”

Other experts aren’t as concerned.

Regarding abortion, she believes that if Roe is overturned it would simply be “the beginning of a new cycle,” with the roles reversed and the abortion-rights movement looking to persuade the Supreme Court to reverse its precedents.

“You would expect the pace of change across doctrinal areas to accelerate; it would just be a little bit hard to know doctrinal area by doctrinal area,” she adds. “But any kind of setback in this context is temporary, not permanent.”

And when considering the speed and scope of doctrinal change, Justice Ginsburg’s thoughts on Roe v. Wade may be relevant.

“Doctrinal limbs too swiftly shaped,” the late justice said in 1992, “may prove unstable.”