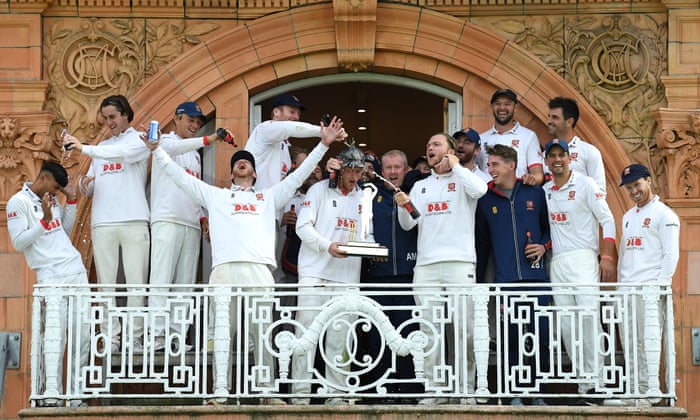 Essex have admitted the celebrations that followed their victory in the Bob Willis Trophy on Sunday did not meet the county’s “inclusive values” after Feroze Khushi, a young Muslim cricketer, was sprayed with alcohol on the balcony at Lord’s.

Khushi, a 21-year-old batsman who was 12th man for the final against Somerset after four appearances during the group stage, was photographed recoiling as his teammate Will Buttleman poured beer over him during the post-match celebrations.

Although said to be a case of unthinking over-exuberance rather than malice, the image caused disquiet among the county’s British Asian community with Sajid Patel, the co-founder of the National Cricket League in East London and Essex, calling for greater education.

Patel said: “The poor bloke [Khushi] is stuck in the corner of the balcony and couldn’t really move. The only thing he could have done was jump off. The photo of someone pouring alcoholic stuff on him – that was diabolical.

“You have to question the players involved. All player associations in cricket should give their players cultural awareness lessons. It’s brilliant to see Essex win another title, but also frightening to see this is happening.”

The images come at an acute time for the sport. Recent figures have shown there are just 33 black, Asian and minority ethnic cricketers at the 18 first-class counties, while Yorkshire are currently investigating claims of “institutional racism” at the club by their former off-spinner Azeem Rafiq.

Reacting on Monday, after the five-day draw that left Essex crowned winners by virtue of a greater first‑innings total,a statement from the club read: “[The celebrations] did not meet the inclusive values of the organisation.

“Essex County Cricket Club prides themselves on their work within multi-diverse communities throughout the county and the surrounding areas.

“For a substantial period of time, Essex have had a multi-diverse team with players from different backgrounds, religions, and races, where cricket is at the heart of these communities.

“The club has worked extremely hard and will continue to bring cricket to anybody and everybody, and educate on diversity, but further work needs to be done across both sport and society in general, to widen people’s knowledge and make them more aware of cultural differences.”

In recent times England’s cricketers have looked to accommodate players who do not wish to be sprayed with alcohol. After last year’s World Cup victory, for example, Moeen Ali, Adil Rashid and Mark Wood (who is not religious but similarly teetotal) made way once the team photographs had been taken.

Writing about this in his Guardian column, Moeen said: “I find it weird that people still think it is strange that we do it. We respect our teammates and their desire to do this, they respect our beliefs. It’s really that simple.

“The amazing thing about our team is that guys took time out very early on to talk to us about our religion and our culture. They have made adjustments for us and we have for them. And we live in harmony.”