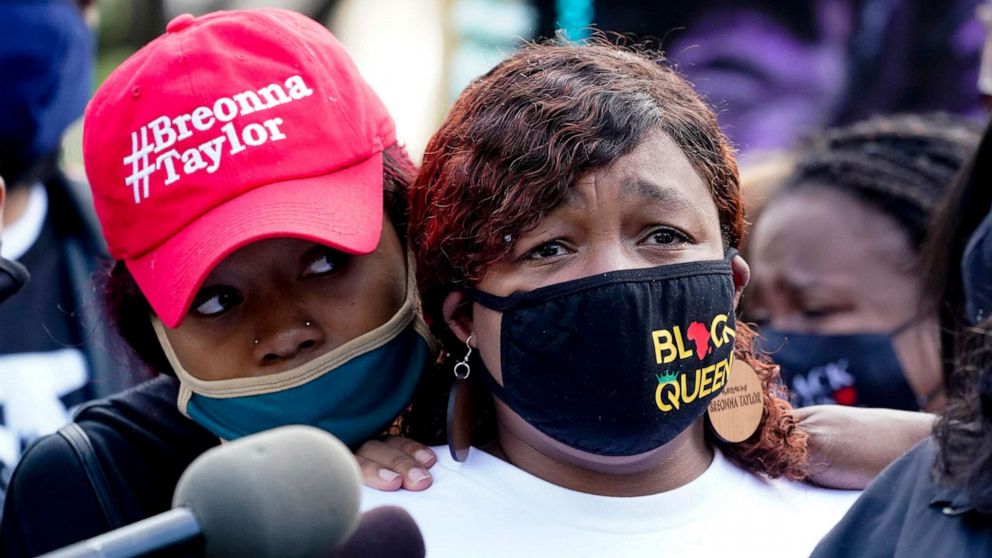 Breonna Taylor’s family and boyfriend are demanding the release of grand jury proceeding transcripts after a Kentucky grand jury indicted one officer for endangering Taylor’s neighbors during the police shooting that resulted in her death.

“There seems to be two justice systems in America — one for Black America and one for white America,” he said.

Crump went on, “What did Kentucky Attorney General Daniel Cameron present to the grand jury? Did he present any evidence on Breonna Taylor’s behalf? Or did he make a unilateral decision to put his thumb on the scales of justice to help try to exonerate and justify the killing of Breonna Taylor by these police officers? And in doing so, make sure that Breonna Taylor’s family never got their day in court.”

Family attorney Lonita Baker demanded a special prosecutor be appointed to present to a grand jury on Taylor’s behalf.

Brett Hankison, an officer who has since been fired from the Louisville Metro Police Department, was indicted Wednesday on three counts of first-degree wanton endangerment for firing into the apartment directly behind Taylor’s.

The neighboring apartment had three people inside, thus the three charges against Hankison, said Cameron. The other officers involved in Taylor’s death were not charged.

Taylor, 26, was shot dead by police while in her Louisville home on March 13. Taylor and her boyfriend, Kenneth Walker, were asleep when three Louisville police officers, including Hankison, tried to execute a “no-knock” search warrant.

The officers were investigating a suspected drug operation linked to Taylor’s ex-boyfriend. No drugs were found in the apartment.

Walker contends he asked the officers to identify themselves as they tried to break open the door, but got no response, which prompted him to open fire with his licensed gun. Earlier this month, he filed a lawsuit against the city of Louisville, its police and others, for immunity against his actions that night under Kentucky’s “stand your ground” law.

Walker’s attorneys are also pushing for the release of the grand jury transcripts. On Saturday, they filed a motion in his lawsuit asking for access to the grand jury transcript and recordings to “promote ‘the ends of justice’ and the search for the truth.” The motion is also asking for all materials gathered by the police department’s public integrity unit pertaining to the incident.

Mattingly was shot in the leg, according to Cameron.

Hankison was fired and the other officers involved were placed on administrative duty.

After the grand jury decision, Cameron said at a news conference Wednesday, “According to Kentucky law, the use of force by Mattingly and Cosgrove was justified to protect themselves. This justification bars us from pursuing criminal charges in Ms. Breonna Taylor’s death.”

“The truth is now before us. The facts have been examined, and a grand jury comprised of our peers and fellow citizens has made a decision,” Cameron said. “Justice is not often easy. Our team conducted interviews in this case, and spent thousands of hours examining all of the available evidence.”

On Friday, Crump said the decision in Taylor’s case follows a pattern “of the blatant disrespect and marginalization of Black people but especially Black women in America who have been killed by police.”

Taylor’s aunt, Bianca Austin, wore Taylor’s EMT jacket at the news conference and read a statement on behalf of her sister and Taylor’s mother, Tamika Palmer.

“This has been emotionally, mentally and physically draining for my sister,” Austin said.

Cameron “helped me realize … it will always be us against them,” Palmer continued. “That we are never safe when it comes to them.” She said she has “no faith in the legal system, in the police, in the laws that are not made to protect us Black and brown people.”

Palmer said Cameron “alone didn’t fail her,” and that her daughter was also failed by “the judge who signed the search warrant … the terrorist who broke down her door … [and] the system as a whole.”

“You didn’t just rob me and my family, you robbed the world of a queen … a queen who was starting to pave her path,” Palmer’s statement said.