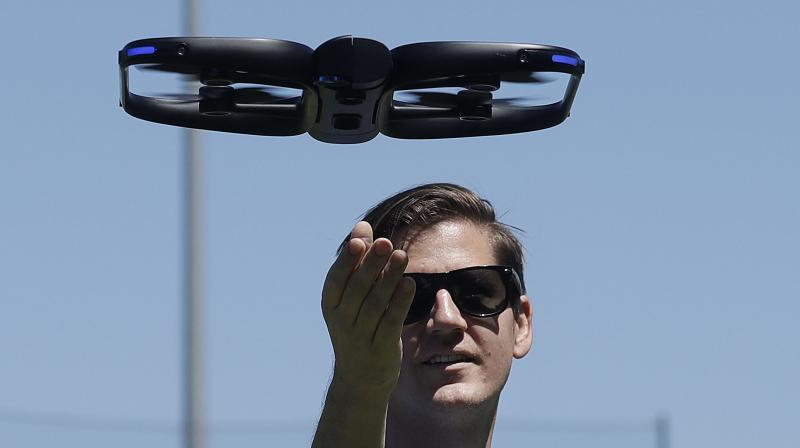 Skateboarders, surfers and mountain bikers used to be the target customers for California startup Skydio, a maker of high-end drones that can home in on people and capture their movements on video all by themselves. Now police officers, firefighters and soldiers are interested in the self-flying machines.

That’s partly because US national security concerns about the world’s dominant consumer drone-maker, China-based DJI, have upended the market for small drones and opened the door to lesser-known companies pitching applications for government agencies and big businesses.

Companies like Skydio are also tapping into a technological revolution that could do away with the need for human pilots to put drones through each one of their paces. Instead, advanced artificial intelligence is starting to power drones that can follow humans and other targets on their own. Robotics experts say Skydio’s cutting-edge AI makes its drones appealing as reconnaissance tools, as does its made-in-America vibe.

“There’s a lot of anti-China rhetoric,” said Vijay Kumar, a drone entrepreneur and the dean of engineering at the University of Pennsylvania.

A document from US customs authorities alleged in 2017 that DJI drones likely provided China with access to US critical infrastructure and law enforcement data. DJI denied the allegation. As political concerns grew, its rivals have increasingly seized on the opportunity to pile on the anti-DJI sentiment.

“They’re the dominant incumbent and we’re the scrappy American underdog,” Skydio CEO Adam Bry said in an interview. “There’s a real opportunity for US companies to lead the way.”

The Defense Department in August gave a seal of approval to Skydio, Parrot and three other firms to supply US-manufactured drones to agencies across the federal government. “We need an alternative to Chinese-made small drones,” Mike Brown, director of the Defense Innovation Unit, said in a statement.

DJI has referred to US actions against it as “part of a politically-motivated agenda” to reduce market competition and support American technology “regardless of its merits.”

The attacks on DJI’s reputation and bans on its use in the military and some other federal agencies have coincided with a lull in demand for pricey personal drones as their novelty wore off. Camera-maker GoPro abandoned its drone business in 2018 and other companies have struggled to build affordable devices.

“Once you get one, it’s not real clear what you do with it as a consumer,” said tech industry analyst William Stofega of IDC.

Stofega said that’s one reason why drone companies are tailoring their products for government or commercial tasks such as inspecting pipelines, monitoring crops or police surveillance. Skydio last year hired a retired Southern California police captain to pitch its drones to law enforcement.

DJI has made a push to counter the security concerns, most recently with a Wednesday announcement that it will enable an internet “kill switch” on more drones so that commercial and government users can halt data transmission on sensitive flying missions. Its products, while off-limits to some federal agencies, are still favoured by many local and regional governments in the US

“If an enemy of the United States wants to see me looking for someone on a mountain, so be it,” said Kyle Nordfors, drone team coordinator for the mostly volunteer search-and-rescue crew of Weber County, Utah. “They can see how we take care of our own.”

Nordfors said he sometimes uses a Skydio drone to scout a riverbed or for other daytime tasks that require the drone to fly by itself without hitting a tree. Skydio, founded by engineers who worked on Google’s delivery drone venture Wing, employs computer vision rather than satellite-based GPS to move its drones around — enabling them to “see” and autonomously navigate around obstacles.

But mostly Nordfors uses a remote-controlled DJI drone — such as the one that helped his team track down a lost teenager this summer in Waterfall Canyon, a rugged hiking area north of Salt Lake City. “He was so thrilled,” Nordfors said of the 19-year-old. “He was jumping up and down.”

At the Clovis Police Department in California’s Central Valley, officers also have a choice of drones they can dispatch to be a “first responder” at crime scenes — at least before the haze of nearby forest fires temporarily grounded them.

The department doesn’t have its own helicopter, but officers can get their eyes and ears out to a scene quickly by piloting the drones from atop a roof near the city’s centre, said Clovis police Lt. James Munro. He said the department typically uses its fleet of about a dozen DJI drones because of their durability and infrared night vision, but is also experimenting with a Skydio drone because of its ability to home in on an officer or suspect.

“You can put a little dot on the person and the drone will follow them,” Munro said.

Kumar, the Penn engineering dean who also founded a startup that sends drones into mines, said it’s not easy to shift from hobby drones to commercial applications. Aerial robots consume a lot of power, limiting how long their missions can last — one reason he said that payload-carrying delivery drone efforts spearheaded by Amazon and Google haven’t yet taken off.

Navigating safely with full autonomy is also difficult, he said.

“Skydio has taken on this challenge of developing vision-only platforms in all kinds of conditions,” he said. “That’s really hard to do.”

DJI doesn’t yet offer such autonomy, but Kumar said it won’t easily be beaten. It was first to really capitalise on the consumer potential of drones and has built out a strong manufacturing and supply chain capacity.

“It’s amazing to me that we discriminate against DJI because we think that company can spy on us,” said Kumar. “Are they a national security threat? I don’t believe so. Are they innovative? Absolutely. Do they attract top talent? Absolutely. Some of my best students have gone to DJI.”