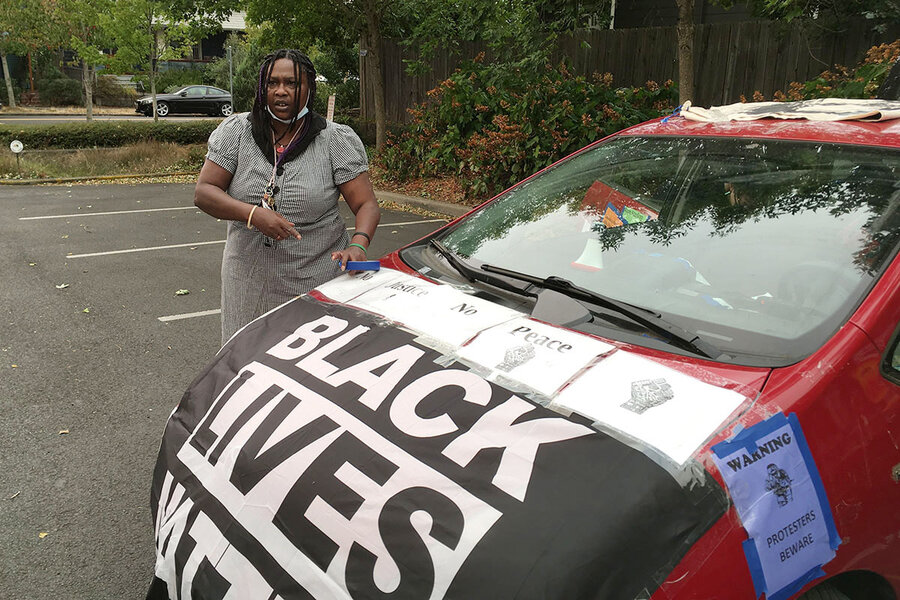 It’s dinnertime on a Wednesday evening, and so Donna Hayes and her best friend Jill Nicholson are leading a caravan of cars through otherwise quiet residential streets in northeast Portland, Oregon.

You can hear them coming, hitting their horns to “Black Lives Matter!” On nearly every block, people come out to cheer them on. A white man bangs a pot lid. A young Black man stops his bike and raises his fist. At one house, a mother steps onto her landing to wave, followed by two youngsters. Some residents yell “woo hoo!” at the cars, while others take videos.

Twice a week, the friends take their vehicle protest parade to the streets, a different route each time to reach as many people as possible. They’ve been at it since June 12 and have no plans to stop. For them it’s personal. Ms. Hayes is the grandmother of 17-year-old Quanice Hayes. Her grandson was fatally shot by police in 2017.

“We fight against police brutality,” she says simply, taping protest signs onto a red Prius before the cars roll out at 6 p.m.

Ms. Hayes has written a play, turned into a digital movie, “Silent Voices,” about nine people killed by police who return to tell their story.

This week, after news circulated that a grand jury had issued only one indictment, for “wanton endangerment,” in the killing of Breonna Taylor – and that not directly related to her death – many cars in the caravan displayed signs of her. The medical worker was fatally shot by Louisville, Kentucky, police in March during a botched raid on her apartment. “Say her name! Breonna Taylor!” drivers shouted from caravan bullhorns.

On Sept. 9, the caravan, hazard lights flashing, is on the small side. About 17 cars line up in a community college parking lot, as smoke builds from wildfires in the next county. Most of the participants are white, as is Portland itself. Usually 40 to 50 drivers show up on Wednesdays and 70 to 100 on Saturday afternoons. They demonstrate the consistency and determination that those pushing for racial justice say is necessary for change. In a pandemic, the caravan also allows those who may not be willing or able to take part in a mass in-person demonstration to do so.

Those would be people like Richard and Judi Seekins, married for 54 years, who have missed only one caravan since it started. They haven’t done anything like this since the Vietnam War.

“I’m a certain demographic, and I want people to know that all demographics in the community support this,” says Mr. Seekins, masked up and standing outside his white Toyota Prius before the caravan takes off. The couple is struck by the “amazing support” the caravan receives in each neighborhood, and Mr. Seekins quotes civil rights icon John Lewis about their “necessary” stand.

Those who protest peacefully and consistently are making people realize that “there is something to this,” says Mr. Seekins. He wants people to know that Portland is not on fire with violence or a city in chaos. At the same time, he’s distressed by “people who are taking advantage of this to make trouble.” They’re distracting from the original Black Lives Matter message, he says, causing the movement to “lose too much impact” right at a moment when the country may be at a “tipping point” toward greater racial justice.

Grace Julian is a college student and volunteer organizer with the group, which goes by the name PDX Car Caravan Protest. Were it not for the pandemic, Ms. Julian would be studying in Prague. Instead, she is home with her parents. She would have liked to have gone downtown to the protests this summer, but to protect her mother’s health, she did not think that was wise.

The caravan allows her to take part in the BLM movement. And she believes there’s power in consistent protest by “the little people.” It moves larger groups, like the National Basketball Association, which came to a temporary halt this summer. “That is big.”

“I’m learning so much,” she says. “I’m getting real world experience organizing people.” To make sure that her message includes action steps, she writes “vote.org” and a telephone number on her windows and signs.

Adrienne Flagg, the logistical mastermind behind the rolling protest, says the twice-weekly caravan “normalizes” the message that Black lives matter. By going around different neighborhoods, “we’re bringing it to them, not just downtown.”

Before the cars depart, she instructs a newcomer not to engage if someone tries to stop the group. “If one person is flipping you off, that’s their deal,” she says.

It can get tense. In August, a man in a pickup truck moved his vehicle back and forth across a neighborhood street to block the group. Quanice Hayes’ great-grandmother, Sylvia Dollarson, got out of her car and approached the man. She asked him to stop; he reached for a gun and pointed it at her, she recalls. Eventually, the caravan went around the pick-up truck and the man left. The episode was taped by a bystander and appeared on the local news.

But this great-grandmother is not giving up.