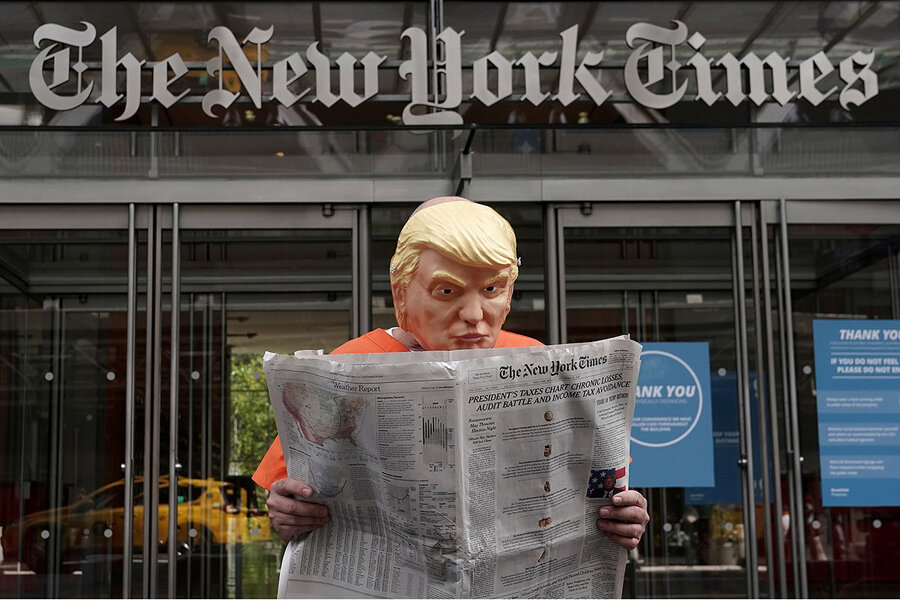 No one likes to pay taxes. That might be among the most universal of truths.

But in Germany, where a progressive rate can go as high as 45% on individual income, levies are not as polarizing or political as they are in the United States. Florian Demmler, for one, is happy to pay his taxes each year.

“Most people really enjoy the comforts of a strong government that gets a lot of tax from us,” says the head of marketing for a German law firm. “They build streets, schools, and hospitals with that money, and we have a good health system and strong social security system.”

At the heart of that sentiment lies trust that the money is spent to boost the collective good, and that every German pays his or her proper share. So the revelations that U.S. President Donald Trump only paid $750 the year he was elected into office – and spent a decade paying nothing due to extensive financial losses – would probably provoke outrage in a German context, says Dr. Tabea Bucher-Koenen, an economist with the ZEW – Leibniz Centre for European Economic Research. “They’d probably get someone to step down and replace him or her with someone else. That’s happened with other politicians who have been accused of taking advantage.”

On the face of it, the story of President Trump’s returns is more about debt than taxation. He’s taken pains to market his brand as a successful billionaire businessman. This week’s disclosures that he’s secretly reported losses for years and incurred massive personal debt threaten to burst that image.

But paying one’s due into public coffers reflects citizen values and ethics around the greater good. As the inequality gap widens in the United States and other parts of the world, a leader’s failure to pay his or her fair share would garner moral outrage.

“These perceptions about taxation, they’re not just a ‘here and now’ kind of thing. They are rooted in some deep values,” says Trish Hennessy at the Canadian Centre for Policy Alternatives.

Tax morale – broadly defined as the intrinsic willingness to pay tax – is generally higher in countries that take in taxes at higher ratios compared to gross domestic product, according to an Organization for Economic Cooperation and Development report from 2019. The OECD calls this a “virtuous circle” between effective government performance and factors such as trust and voluntary compliance. OECD and Latin American countries surveyed showed a high morale, with more than 70% of the population reporting that they would never justify cheating on taxes. But the numbers drop to just over 50% in Africa and Eastern Europe.

In Canada, the Environics Institute for Survey Research found in a survey conducted this fall, on the vision of Canada post-pandemic, that respondents viewed taxes in a positive light by 64% to 24% – a sign of the understood “bargain” they represent, says Andrew Parkin, the institute’s executive director.

Americans have a high tax morale too and feel frustration with those individuals or corporations that don’t pay their fair share, says Vanessa Williamson, a tax expert at the Brookings Institution and author of “Read My Lips: Why Americans Are Proud to Pay Taxes.”

“If you go on Twitter, you’ll see so many people talking about all the taxes that they’ve paid, and how surprised they are to see they paid much more than the president,” she says. “It’s an assertion that you’ve done your part.”

In fact, a Pew Research Center survey in 2018 showed that Americans say paying taxes is key to what it means to be a good citizen, just behind voting.

But the American president’s own words from 2016 – that it was “smart” to avoid taxes – and his failure to provide his returns haven’t hurt him because of the hyperpolarization in U.S. politics. That means majority views, whether on gun control or taxes, don’t get reflected back into policy.

In Canada, Dr. Parkin says such revelations could hurt a sitting head more, simply because there is less polarization: sides aren’t just pulled to their camp on a particular policy or revelation, he says. “So people are much more likely to react to it in terms of whether this strikes them as fair.”

Trouble with corruption in Mexico

But in Latin America it’s not clear how far moral outrage over tax nonpayment would register.

The economic slowdown in Latin America starting in 2011, alongside high-profile corruption scandals in the public sector across the region, has led to increased inequality and less confidence in the government’s ability to deliver on their end of the democratic bargain. It’s helped create an environment where citizens feel they’re more justified in not paying taxes, according to the 2019 OECD report.

Mexico has one of the lowest rates of tax collection in Latin America, with a vast informal economy (roughly 60% of the workforce) and prevalent tax evasion by corporations and wealthy citizens. Part of the challenge in collecting more taxes is convincing Mexicans that their taxes are going toward services that benefit them.

Some 90% of Mexicans believe government corruption is a “big problem,” according to a 2019 Transparency International report. Standards need to change – not only for the private sector, but for public officials, says Eduardo Bohórquez, the director of Transparencia Mexicana, a nongovernmental organization and the Mexico-based chapter of Transparency International. In 2015, civil society pressured candidates running for public office to disclose their personal assets, potential conflicts of interest, and their taxes. They failed to win on tax transparency.

Yet, he says, if it were revealed that a Mexican president was shirking his or her tax responsibilities, “it would not only be a scandal. It would be a crime under Mexican law.”

It’s also a serious crime in China – for anybody. The government may publicly shame those on a blacklist of offenders by publishing their names and identity card numbers, and by barring them from leaving the country, among other possible penalties.

The government has also used certain high-profile cases to set an example against dodging taxes. In July 2018, for example, popular Chinese actress Fan Bingbing disappeared for three months, only to resurface after being charged with tax fraud and slammed with a nearly $130 million bill. Ms. Fan apologized profusely to her tens of millions of fans on social media, while praising China’s ruling Communist Party in an apology that appeared to be coerced.

Distrust of government is one of the many reasons that India, a country of 1.3 billion people, only saw 37 million tax returns filed as recently as 2017. Some workers earn too little, work outside the formal economy, or, like farmers, are exempt. But it’s also a holdover from Mahatma Gandhi’s Non-Cooperation Movement, which sought India’s independence from British colonial rule and featured a central plank of nonpayment of taxes to a distant foreign power. And while India today is the world’s largest economy, too many Indians hold the view that the government is simply not to be trusted to do anything with tax dollars of real benefit.

In Germany, meanwhile, “fairness” gives tax morale a boost. German taxation researchers have found individuals don’t necessarily choose tax schemes based on what’s “most beneficial to them.” Rather, “fairness considerations play a major role,” write the authors of the report, “Don’t Tax Me? Determinants of Individual Attitudes Toward Progressive Taxation.”

“German citizens expect that millionaires should pay high taxes, and pay even more than the average citizen,” says Bernd Pfeiffer, a tax adviser and member of Germany’s leading Christian Democratic Union. “People have strong feelings about their duty to pay a fair share of taxes.”

Behind the masks, teachers and students struggle to communicate