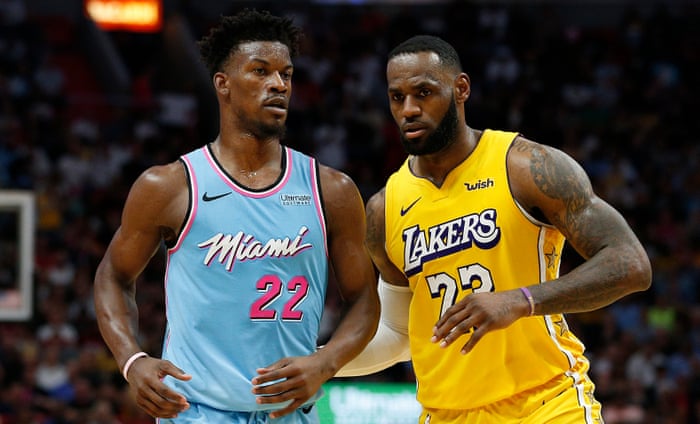 What the Heat need to do to win…

Well, that’s the question isn’t it? It’s tempting to say that there’s not much hope, but the Heat have been surpassing expectations all postseason. There’s a simple answer here: limit either LeBron James or Anthony Davis and force the other to try to carry the entire team, hope that they can’t. Reminder: Simple is not the same as easy. HF

Miami’s Bam Adebayo must find a way to slow down Anthony Davis, who has been the best offensive player in these playoffs in averaging 28.8 points and making 36.6% of his three-point attempts. BAG

The Lakers may have the league’s best one-two punch, but the Heat have a guy who can force them to play with one hand behind their back: Jimmy Butler, a one-man LeBron headache in their Central Division days. The more Butler frustrates James, the harder it becomes for Kuzma, Caruso et al to find a rhythm. AL

What the Lakers need to do to win…

Even if the Heat manage to limit LeBron or AD, it may not matter anyway. If a third member of the Lakers steps up, a Kyle Kuzma breakout or one or two games of Playoff Rondo could be enough to make this a short series. HF

The Lakers must continue to create scoring chances off live ball turnovers. No team is better at turning defense into offense by getting easy points off steals and blocks, putting less of a burden on James and Davis in half-court sets. BAG

Throw big bodies at Bam Adebayo. Between AD, JaVale McGee and a resurgent Dwight Howard, they don’t lack for fresh ones. Nikola Jokic, who may well have revealed himself in these playoffs as the league’s best big man, lost to that forest, after all. Adebayo, a more aggressive defender who makes a strong case for the No2 pivot, could well find himself a prime target for foul trouble, too. AL

Your finals MVP will be…

In times of great uncertainty, we are all looking for consistency. If LeBron James keeps doing what he’s been doing, he will be the sentimental favorite to win this award. HF

If the Lakers win as expected, it’s hard to imagine anyone but LeBron James winning this award for a fourth time. BAG

Anthony Davis if the Lakers win, because LeBron hung back and let the Brow exploit mismatches all over the court for gaudy stats. Jimmy Butler if the Heat win, because he shut down the best player in basketball and came up big (per usual) at the stripe and down the stretch. AL

Tyler Herro. OK, this is a bit of a cheat. After his 37-point performance in Game 4 of the Eastern Conference finals, it’s safe to say that the Heat rookie won’t be completely unheralded. The 20-year old player has already been earning legit Magic Johnson comparisons. HF

It feels strange to classify a former NBA finals MVP and Olympic gold medalist as under the radar, but 36-year-old Andre Iguodala is averaging a mere 4.0 points in 19.0 minutes per game in these playoffs. Look for Spoelstra to rely on him more heavily in this series as a defensive stopper on LeBron. BAG

Kelly Olynyk. The 6ft 11in Canadian not only gives the Heat size to counter the big bodies LA will be bringing off the bench to frustrate Adebayo, but Olynyk’s also quick and rangy enough to chase AD outside-in. As Erik Spoelstra shifts his defenses for the moment, Olynyk’s switches could prove pivotal. Same goes for his three-point shooting. AL

The Lakers drop Game 1. This Heat team enter the finals red hot. Meanwhile, this Lakers team seem to need a bit of a jolt to get them going. I can already imagine the “are the Lakers in trouble?” thinkpieces. HF

The Heat win the first two games. The Lakers shouldn’t need a wake-up call against an opponent as clearly dangerous as Miami, but they’ll get one. And they’ll answer it. BAG

GUAR-ON-TEED … this ends in six. AL

How will these finals impact LeBron’s case for GOAT?

Win or lose, it feels like they will only help. Just by making it back to the finals with his third different team, James has added to his legend. After the Lakers won the Western Conference finals, Tommy Beer noted the ridiculous fact that LeBron has played in 45 of the last 51 finals games. HF

LeBron’s case is already closed, in some people’s view. To others, he will remain two rings behind Jordan’s six in the only metric that matters. Best to just enjoy him while we’ve got him, because there won’t be another like him any time soon. BAG

MJ never won one on a neutral site during a pandemic as a social justice uprising reached full boil. This has been the craziest NBA season ever, with players having to make all kinds of adjustments to their well-worn routines. That LeBron could not only roll with it all but also lend his voice to the weightier matters outside the bubble while leading his third (!) franchise to the promised land – and in just his second year in La La Land to boot – should be just the thing that breaks him out of MJ’s long shadow for good. AL

The winner will be …

The Lakers in five. Even assuming that the Heat find a way to win Game 1, that will just end up making the Lakers angry. Watch for LA to win Game 2 wire-to-wire, and then take control of the series from there. The Heat will have at least one more game where they have a second-half lead, just to set things up for LeBron to have one of his Trademark LeBron Games. Game 5 ends up an anticlimactic blowout. HF

The Lakers in six. Butler and the Heat have the chemistry and defensive tenacity to give LA a bigger headache than expected, but the Lakers’ class behind the two best players on the floor, girded by the support of Rondo, Caruso and KCP, will win out. BAG

The Heat in six? Their best player gives LeBron fits, their coach is one of the sharpest minds in the game and criminally underrated, and their roster is full of guys who feel overlooked or slighted for one reason or another. What’s more, they’ve got the added luxury of Pat Riley for an extra brain to pick. In a year where up is left, this feels about right. AL

Didn’t get what I deserve but it’s okay, now I just focus on my cricket: Amit Mishra

Lizzie Banks: ‘If people can’t watch on TV, there’s no point having the race’