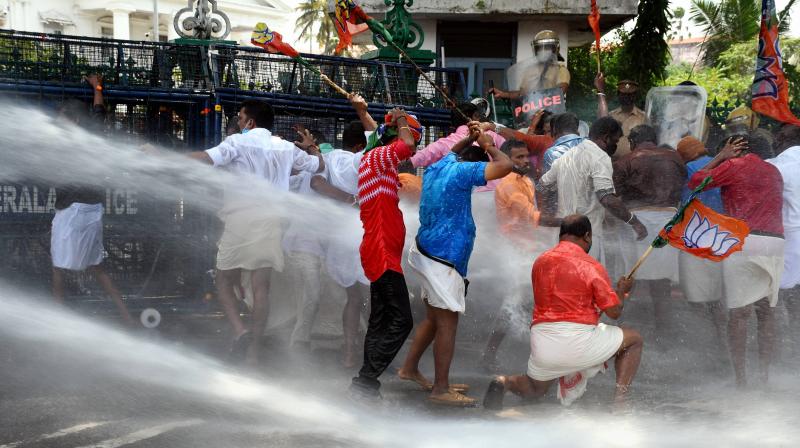 Notwithstanding the appeal made by chief minister Mr Pinarayi Vijayan to comply with Covid safety protocol and maintain restraint during agitations,  the opposition parties in Kerala continued their protests on Thursday demanding the resignation of higher education minister K T Jaleel.

Workers of BJP took out protest marches in Thiruvananthapuram and other parts of the state.

The youth wing of Muslim League took out a march to Jaleel’s house in Malappuram. The agitators tried to cross the barricades put up in the area which led to lathicharge by police. Four youth league workers and a policeman were injured in the incident.

The opposition parties have been up in arms against Jaleel after the minister was questioned by ED and NIA in connection with the allegations related to distribution of Quran brought in diplomatic baggage from UAE and aid sought from the Consulate during Ramadan.

Though the NIA notice had clearly stated that Jaleel was asked to appear to answer certain questions as a witness in connection with distribution of Quran and other complaints, the opposition parties insist that the higher education minister's hands are not clean and he needs to be thoroughly interrogated. The Congress,  Muslim League and BJP have made it clear that they would continue the stir till Jaleel resigned.

Apart from Thiruvananthapuram and Malappuram, protests were also held in other districts. In neighboring Kozhikode, the BJP workers took out a march to Collectorate. Police used water cannon to   disperse the protestors.  In separate protests, Janata Dal workers and BJP SC Morcha activists took out a march to the State secretariat. The police used a water cannon to chase away the protestors who were trying to remove the barricades.

In Pathanamthitta a march taken out to the SP office by members of the KSU, the student wing of Congress, turned  violent. The police resorted to lathi charge to prevent the situation from going out of hand.

Workers of Yuva Morcha and ABVP took out a march to education minister C Raveendranath’s residence in Thrissur. Protests were also held in Alappuzha district .

Opposition ignores CM's appeal: The chief minister has been repeatedly urging the opposition parties to refrain from holding violent protests or agitations in which police action is warranted, in the wake of the increasing number of Covid – 19 cases in the state particularly in Thiruvananthapuram. So far a dozen political workers who took part in these agitations have been tested positive for Covid – 19.

Opposition leader Mr Ramesh Chennithala, however, rejected the CM's accusation that opposition protests were responsible for the hike in Covid – 19 cases.  He attributed the rise in cases to the government's failure in effectively dealing with the situation.

How is Joe Biden going to combat the Trump lie machine?