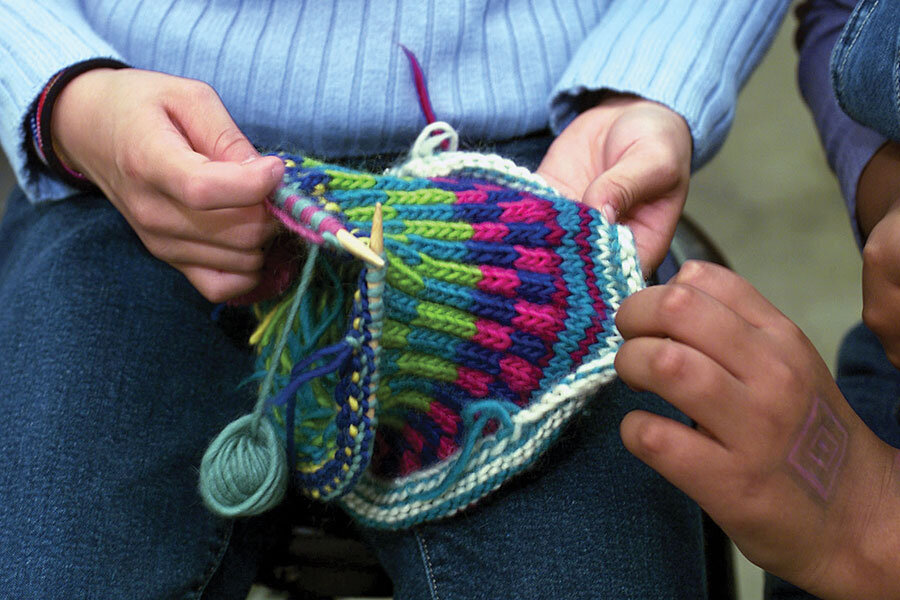 I’ll just put it right out there: Knitting is spooky. It’s obviously impossible to do, and yet you see people doing it all the time. These people clearly are a superior life-form. If you doubt this, spend a day with a dozen of your friends. At the end of the evening, have a look around: Eleven of you will have cookie crumbs in your laps, and the knitter will have an entire sweater.

That’s just freaky. Because knitting makes no sense at all. A knitter, by definition, creates holes by surrounding them with string, using sticks, a clickety-clickety noise, locally sourced air, and goodness.

Those of us who suspect we are not innately good can barely aspire to the art. And yet, I so aspired. I wanted a hat.

I bought a ball of string and some sticks and I found a tutorial online. After stopping the video four or five hundred times, I cast on 50 stitches. Then, staring hard, and trying to make my sticks and string match up to the video, I succeeded in making an entire knit stitch.

Then I made another one. And somehow, with great care and deliberation, I soldiered my way to the end of the row, 50 knits in a line. It was a triumph of historic proportions.

Slow, yes; challenging, sure; and yet majestic and powerful. I felt like Hannibal marching his elephants across the Alps into Italy.

I consulted the tutorial. They don’t warn you about this when you’re learning how to knit, so I’ll tell you now: You can’t just learn to knit. You have to learn to purl, also.

Nuts! I studied the video again, and I manufactured a single purl stitch, and then another, and eventually rowed my way back to the beginning. According to the calm and cheerful woman in the video, that’s all there is to it. If you can make a knit stitch, and you can make a purl stitch, you’re on the road to glory. You can make cable-knit trousers for an octopus. I was beginning to be suspicious of her, but I carried on.

Something dreadful kept happening to the last stitch in my row and I didn’t have a clue how to fix it, so I ripped everything out and started over. Five or six times. Then I got a running start and some momentum and completed several rows. It was awesome. Why, it was starting to look like a sweater! For a pencil. A pencil sweater. But still! My speed and rhythm increased.

Pride goeth before a fail.

All of a sudden I noticed a mistake a few rows back. I didn’t know what it was, but I knew where it was. I could point right at it. My splurket slipped off my nobbin or something. There was a disturbance in the Force.

The problem was knowing what to do about it. A knitter will recognize that one little portion of the string needs to go up and under another portion, behind the nether-bits of yet another portion, do the hokey-pokey, and spring triumphantly out the top, but I am not yet a knitter, and I couldn’t see this at all. I, in fact, could not have been more baffled if I had been plunked down in front of the controls of the Lunar Module and told to “land this thing.”

So I pulled out all the stitches until it was a big pile of wrinkly string and began again.

This was like starting a cross-country
trip over because you missed an exit in Iowa, but I reasoned it was all good practice. I lumbered through another dozen rows and bollixed it up somehow again, and pulled it all out again.

If I keep going backward this way, I’m going to be face to face with the original donor sheep. I will not only have made no progress, but sweaters will begin to go missing from my closet.

I’m not giving up, though. I’m getting better. In fact, now I can knit like nobody’s business. Nobody’s successful business, anyway. And as soon as I learn to de-bollix, I’ll have me a hat.