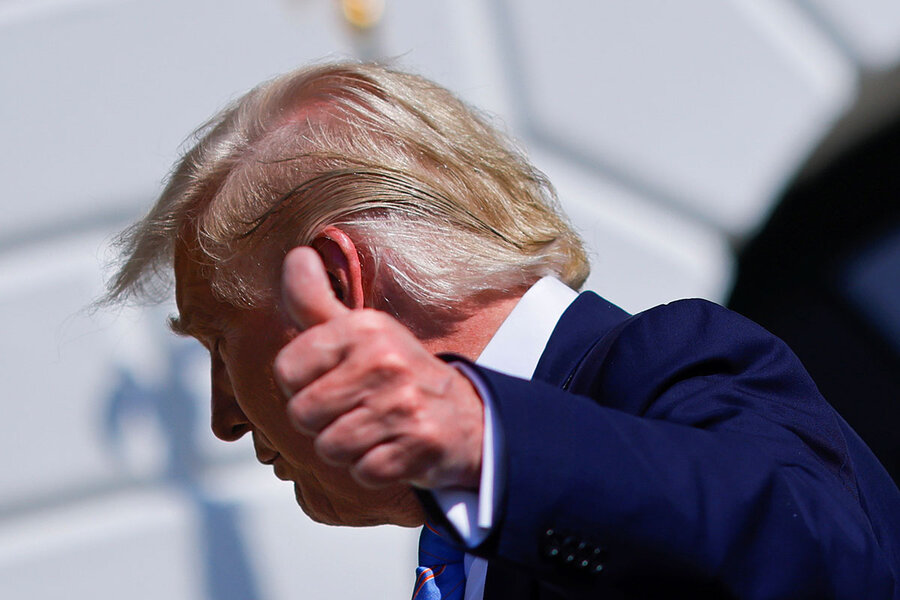 U.S. presidents are both the taxpayer-in-chief and the tax-collector-in-chief, says Joe Thorndike, a tax historian and expert who’s written extensively on the Nixon case. They sit at the top of a system that, in the end, relies on voluntary compliance. The faith of citizens in its integrity matters – a lot.

“We depend on people being honest, and it’s important to know the president is honest too,” says Dr. Thorndike.

“Extent of his avoidance is remarkable”

The trove of tax information received by the Times represents the clearest and most extensive available picture, by far, of President Trump’s tax obligations and the financial structure of his companies.

Overall the president paid no federal income taxes in 11 of the 18 years Times reporters examined. His incoming cash was more than offset by a gusher of claimed losses at his golf courses, Washington hotel, and other businesses, as well as deductions for business expenses.

Among the details: Mr. Trump’s firms appeared to pay more than $20 million in (deductible) consulting fees to his adult children, who in some cases were already employees of those firms. Personal expenses claimed for deductions include more than $70,000 paid out for hairstyling during Mr. Trump’s stint on “The Apprentice.”

During the Trump presidency, the Trump firms have received more money from foreign sources than previously made public. Hundreds of millions of dollars in loans personally guaranteed by the president will come due soon – as the Internal Revenue Service continues to audit a $72 million tax refund Mr. Trump has already received.

In general, it looks like the president and his companies have taken aggressive tax positions, says Mark Mazur, director of the Tax Policy Center. They also blur the line between personal and business expenses, which can be a red flag for the IRS.

“It’s surprising to see example after example where that was the case,” he says.

It’s not unusual for real estate investors to have low or negative tax rates, due to the debt they incur to invest in their businesses and the pattern of incoming rents and outgoing expenses, says Dr. Mazur, a former assistant secretary of tax policy at the Department of the Treasury.

“But what’s different here is the scale. It’s not a little bit, it’s a lot,” he says.

President Trump is not shy about congratulating himself as a successful businessman, and has boasted about his affinity for debt and ability to take advantage of tax loopholes, which he has said makes him “smart.”

“But the extent of his avoidance is remarkable,” says Vanessa Williamson, a senior fellow at the Tax Policy Center and author of “Read My Lips: Why Americans are Proud to Pay Taxes.” “The precision with which he has produced tax avoidance through losses of money is really extraordinary.”

But just because something is carried out on an unprecedented scale does not mean that it is de facto illegal.

The size of President Trump’s business losses and the fact that they have continued to occur year after year may be highly unusual, say conservative defenders of the president. But he’s only doing what lots of wealthy people do when they plan to minimize their taxes. The U.S. tax code is extremely complex and continues to be riddled with loopholes and other ways to avoid paying Uncle Sam.

In that sense the president’s tax returns may be a window into the nature of the nation’s financial system as much or more than revelations about Mr. Trump’s own planning.

“I think most people understand that this practice is common,” says Daniel Weiner, deputy director of the Brennan Center for Justice’s election reform program. “And frankly these sorts of loopholes in our tax code are ultimately a product of much deeper dysfunction in our democracy.”

In the 1970s Nixon tried to make a big deduction through an existing loophole that had been used only for small deductions in the past.

He released his tax returns in late November 1973, following a grilling on his personal finances and the developing Watergate scandal by newspaper editors at a question-and-answer session at Walt Disney World. (It was during this session that he made his famous remark, “People have got to know whether or not their president is a crook. Well, I am not a crook.”)

The returns revealed that Nixon had claimed a $576,000 deduction based on the perceived value of a charitable donation of his vice-presidential papers to a government archive. For 1970 this reduced his tax liability to $792.81.

The deduction was legal at the time. President Dwight Eisenhower had done the same. But the drastic tax reduction became controversial, and Nixon had backdated the donation in error. An investigation showed he owed a considerable amount in back taxes, which he paid, at a high cost to his net worth.

In 1976 candidate Jimmy Carter released his full tax returns to bolster his image as a plain man of the people. He won – and releasing returns became a norm and ritual for presidential nominees, until candidate Donald Trump declined to follow suit.

The exposure of any potential conflicts of interest is not the only reason that norm was important, says Vanessa Williamson of the Tax Policy Center. It was also about setting an example.

“You do that because elected officials should represent a higher virtue in their dealings than just the average,” she says.

After all, the entire U.S. tax system relies on taxpayer self-assessment and rule-following. Few returns are audited. Most Americans are willing to pay their fair share if they think others are (roughly) paying a fair share too.

Blatant tax cheating by elites can collapse this social compact. Look at Greece, where widespread political corruption over the years fed a culture of tax avoidance that costs the government substantial revenue.

“At a time when often the American people are expected to pay taxes, including to support many things that they might not individually agree with whether it’s wars or expansive social programs, a person who is at the head of our government arguably should be setting an example,” says Mr. Weiner of the Brennan Center.

Windy, dry, hot weather to continue in California as dozens of fires rage