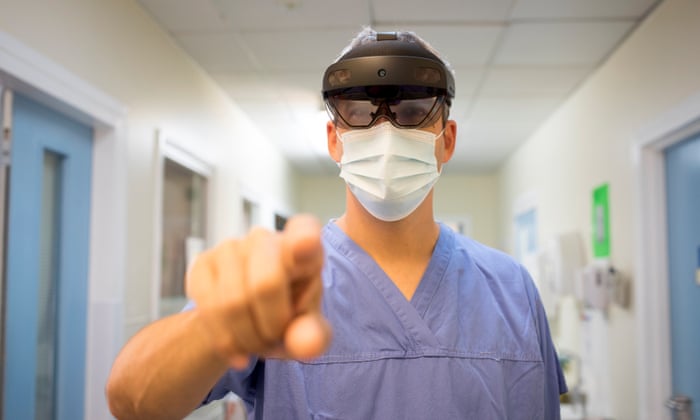 “At the moment it feels like we are on a knife-edge,” says Prof Tim Orchard. The boss of one of the NHS’s biggest trusts, a consultant gastroenterologist, is referring to the apprehension among its 14,000 staff about the second surge of Covid-19.

He’s not the only one feeling anxious. The ominous recent sharp rises in infections and hospital admissions because of the disease, and the likelihood that the death toll will soon follow suit, has put the entire NHS on alert.

The first wave in the spring, when Covid-19 was claiming several hundred lives a day, is fresh in Orchard’s mind. Orchard, the chief executive of the Imperial College Healthcare NHS trust, which who runs five hospitals in London, recalls the “terrible problems we had in terms of the number of sick patients”.

Just before Easter, 346 of the trust’s 1,000-odd beds were filled with people seriously ill with coronavirus.

In the rush to reorganise how his hospitals provided treatment, on an unprecedented scale, the trust acquired more ventilators, doubled its stock of intensive care beds and repurposed hundreds of personnel to take on new roles, in a desperate effort to save as many lives as they could.

It suspended most normal care – diagnostic tests, screening, outpatient appointments and surgery – to free up beds and staff, as did hospitals everywhere. Then came Orchard’s own battle when he contracted the virus. “It wasn’t great. I was lucky in the sense that it didn’t particularly go for my lungs.” Though very unwell, he convinced doctors that he could manage at home.

“While I was ill I monitored my oxygen saturation levels all the time as I knew that the danger point was between day 7 and day 10 when hypoxia [oxygen starvation] can kick in. I lost about a stone and a bit in two weeks.”

Early October is eerily reminiscent of mid-March. The trust is yet again reorganising its services and staff, in anticipation of the likely return of mass casualties from Covid-19. However, this time it is doing so after analysing what it got right back then, and what could have gone better. That re-evaluation has gone on for months, in contrast to the hurried lurch into the unknown in March as it tackled a new and terrifying disease for the first time. 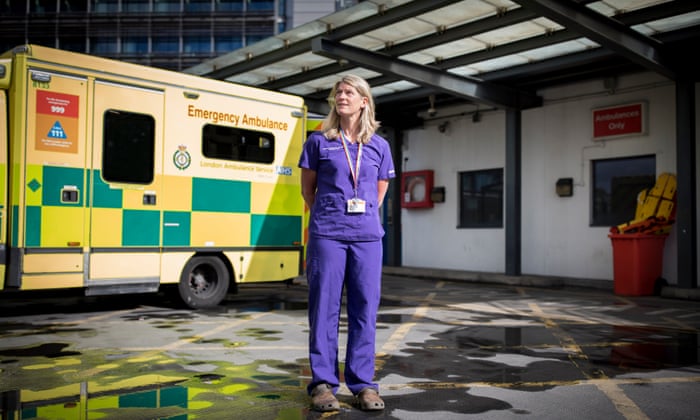 “The NHS has decided to do things very differently this time round and we will be doing things very differently,” explains Orchard. In a major change of approach, NHS England has told hospitals to keep on delivering as many non-Covid services for as long as they can – especially operations – while also dealing with the intense demands that the second wave will bring. To do that, some hospitals will treat Covid-19 patients while others will remain “Covid-free” and undertake other care: outpatient appointments, CT and MR scans, endoscopies, screening and operations.

That rethink comes after doctors, health charities and hospital chiefs voiced increasing disquiet about the millions of patients who could not access normal care, or faced long delays, because of the focus on the pandemic. The consequences have been profound, with cancers being missed and patients struggling in pain with an unreplaced arthritic hip or knee. Before coronavirus, there was a backlog of people needing care; that queue is now longer than ever. 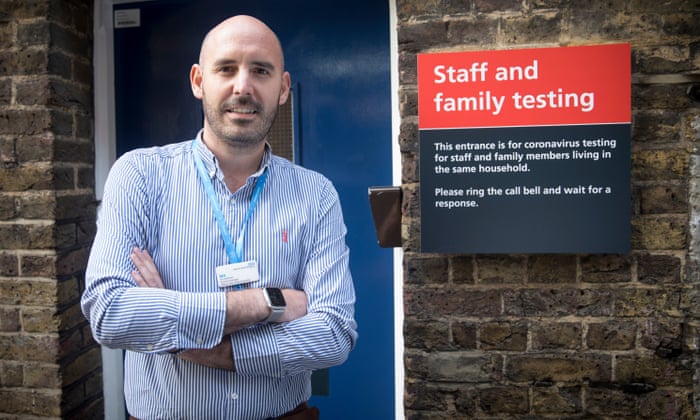 So while Imperial did not end up overrun in the first wave, a price has been paid.

“For the second time around we’ve tried to learn the lessons from the first wave of Covid-19,” explains Orchard. “The key thing for us as a service is the realisation that we can’t simply stop everything else that we are doing – normal, non-Covid care – in order to treat Covid-19. We did a not bad job in the first wave in keeping services going, such as cancer surgery.

“But we did stop a lot of things.”

As a result, Imperial’s five hospitals will have a role to play to avoid what the NHS Confederation calls the winter “triple whammy”. Doctors will have to deal with the Covid-19 second wave, provide normal care and tackle waiting lists, simultaneously. To do this, Hammersmith hospital will be “Covid-free”, focusing on planned operations such as hernia repairs and joint replacements. Charing Cross hospital and St Mary’s hospital, the trust’s flagship, will each handle Covid-19 patients on their wards and in their intensive care units, while also treating non-Covid cases too.

“This time will be different because we are better prepared,” says Prof Julian Redhead, Imperial’s medical director. He has increased the supply of critical care beds for patients needing high dependency or intensive care. Before the pandemic it had 68, and in the scramble to cope with the first wave, this was temporarily increased to 143. This time round, the baseline is 104 and it can go up to 191 under its “surge plan”.

The success of the NHS’s ambition to provide far more normal care this time will also depend on it having enough staff and being able to stop the disease entering “clean” areas containing vulnerable patients.

At the front door of A&E at St Mary’s, screening questions help staff separate patients thought to have Covid from the rest. Anyone who is then admitted is tested or isolated in a side room, and every inpatient also has a nose and mouth swab taken every week. 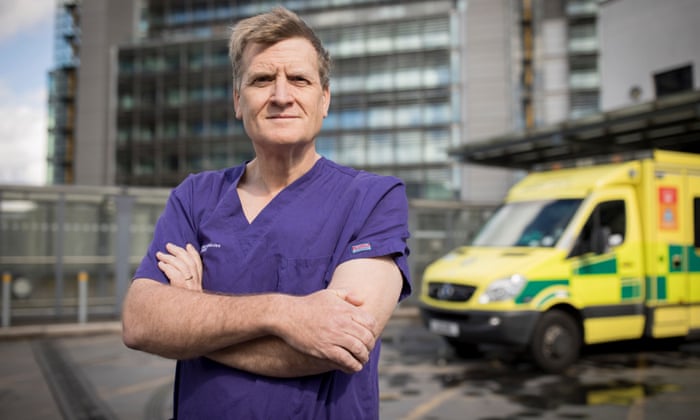 The London trust has two advantages over many others. St Mary’s is one of eight hospitals trialling the 90-minute Covid tests the health secretary, Matt Hancock, hopes will ultimately render the long testing delays a thing of the past. And it has its own staff testing service, which means its personnel and their families are not at the mercy of the government’s shambolic test-and-trace programme.

The black, oblong DnaNudge testing machines are kept in a side room off a corridor in A&E.They usually give an answer in 60 minutes.

“We have four of them so use them for specific pathways where we need a really quick answer [about a patient’s Covid status],” says Dr Ali Sanders, the trust’s director of emergency care.

“We use them with patients who are going for urgent surgery, such as after a major trauma or stroke, or going up to intensive care.”

After a pandemic that left several hundred NHS workers dead, the devices also reduce the fear among St Mary’s staff that they might be treating someone with Covid and get the virus themselves. “It gives everybody the assurance to know what they are dealing with, a Covid-positive or negative patient. Come winter, when people come in breathless and with a temperature, we’ll need to know that at the outset. It’ll be hard to tell if someone’s pneumonia is or isn’t Covid pneumonia,” says Sanders.

However, she adds: “If we had 100 machines we’d test everyone. But we have four.”

Social distancing is another challenge, especially in an old hospital such as St Mary’s. The trust is using its £1.4m share of the government’s £450m NHS winter funding to enlarge both the waiting room and treatment areas in its A&E by taking over other clinical areas. However, work has not started yet and will not finish until January.

Some of Imperial’s doctors are using headsets called HoloLens to relay what they are seeing and saying to small groups of colleagues watching in a side room. The technology means they can meet patients one-on-one and avoid the gaggles of medics around beds that ward rounds usually involve. “Now 80% fewer doctors go to see the patient. The headsets protect staff from patients and patients from staff,” says Dr James Kinross.

Across the road from A&E, in a mauve brick building, Imperial’s staff and family testing facility has been getting busier in recent weeks as infections have risen across the country.

Ian Bateman, a general manager who helped set up the facility, explains that children’s coughs and fevers since the schools went back are a major factor in the increased demand, as they force their Imperial staff parents to stay off work and isolate.

But while the NHS does feel better prepared on many levels, the decision to maintain normal care in the midst of the second wave of Covid is ambitious, and will test its powers of organisation and resourcefulness – and 1.4m staff – yet again.

How are staff feeling ahead of a second surge of Covid?

“I’ve been through one wave,” says Redhead, “so I wouldn’t say that people aren’t nervous about going into a second, because they are, because they know the difficulties in managing these patients. But we are up to that and we will rise to that challenge.

“Back in the spring it was very demanding. We were one of the hardest-hit areas. It was incredibly difficult for staff to work in unfamiliar surroundings and using unfamiliar equipment, and providing end-of-life care. That increases their anxiety about going back into that environment again.

“But they will do it; they are up for that challenge. We still hope for the best but plan for the worst.” 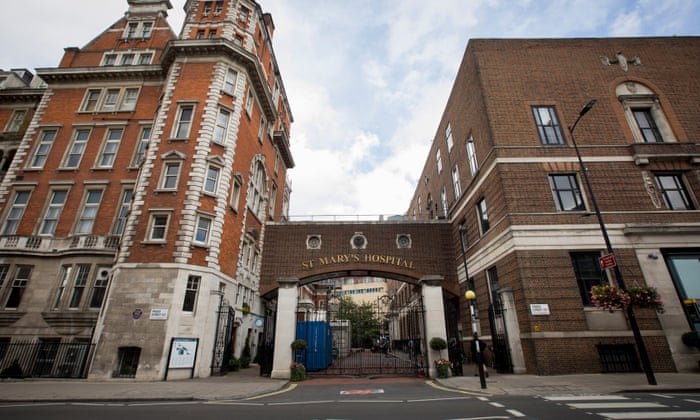 Many doctors fear that this new wave of Covid could be more demanding than the first, because it is arriving as the NHS heads into winter, not out of it, as was the case in March.

“That’s the worry,” says Redhead. “That it won’t be just Covid that’s pushing our numbers; it will be flu, pneumonia and the other respiratory illnesses we get during winter. If we get usual winter pressures on top of a second wave of Covid and a bad flu season, that would add to the pressure on hospitals and make it much harder for our staff.”

Orchard shares the apprehension, but is also cautiously confident that his trust, and the NHS in general, is much better set up for what lies ahead.

“I’m very concerned that a second wave coming on top of seasonal flu and normal winter pressures is going to be a major challenge for the health service. But if you look at Australia, the flu season there hasn’t been a bad one. And it’s certainly possible that the second wave will be longer but flatter than the first wave. And, unlike then, we now have treatments available, such as [the steroid] dexamethasone,” says Orchard .

“We are bracing ourselves for having to live with Covid in our populations for a long time. Certainly we are planning to do that until the end of March. This is a marathon, not a sprint.”