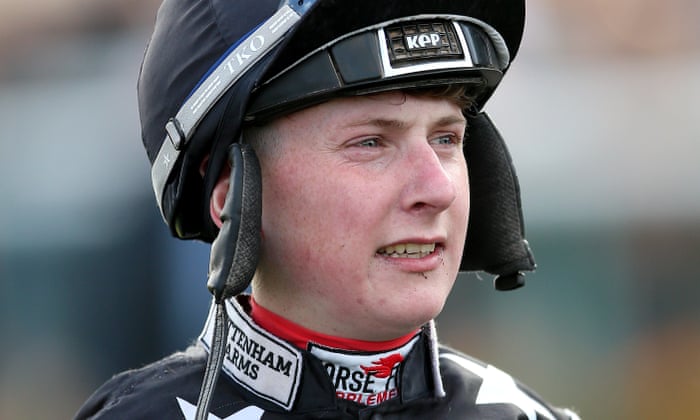 The jockey Nathan Evans has tested positive for a banned substance, understood to be a metabolite of cocaine, and is facing a lengthy suspension as a result. The news, which emerged on Wednesday, explains why Evans has not been seen in public since being taken off his mounts at Beverley on 27 August, when the test result became known to officials.

A statement from Paul Struthers of the Professional Jockeys Association said: “Nathan has been informed that he was tested positive for a prohibited substance and was suspended with immediate effect as a result. Nathan is disappointed with himself for his mistake and is deeply sorry for his lapse of judgment. He has informed and apologised personally to those who have supported his career thus far. He has not asked for the B sample to be tested and is engaging with the PJA and the British Horseracing Authority on the process that now follows.”

Evans, who did not respond to requests for comment, has been attached to the North Yorkshire stable of Mick Easterby since he began race-riding in 2015. He had some notable early successes on the yard’s useful sprinters Hoof It and Hoofalong, who both carried the colours of Chubby Chandler and Lee Westwood.

With Evans aboard and claiming 5lb, Hoofalong bagged the Scottish Sprint Cup at Musselburgh in 2016, a first prize of £62,000. That same summer, Evans won the Stewards’ Sprint Stakes at Glorious Goodwood on Hoof It and was then third on the same horse in the Ayr Gold Cup.

Big-race successes have been harder to come by in subsequent seasons, however. Evans has made it to the winner’s enclosure just six times this year from 132 rides.

The cause and effect is always difficult to unscramble in such situations but Easterby, who provides most of Evans’s mounts, is also having a slow year, with a strike-rate of just 4%. But September has proved to be the trainer’s most fruitful month of the year so far, with six winners compared with just three in the previous three months, which will have been galling to his suspended jockey, watching from home or at the yard.

“Since he told us he tested positive, he’s not missed a day’s work,” said David Easterby, assistant trainer to his father. “He’s been in every day. He’s a natural sportsman who was taking everything in his stride until this came along.”

Evans was last in the headlines in the summer of last year, when stewards at Doncaster suspended him for 10 days for an incident in which he struck the racehorse Bowson Fred across the muzzle. The horse had bolted, unseating Evans, who explained at the time: “He bites a bit at home, so I just shoved him back, out of the way. It was nothing intentional.”

No disciplinary hearing has been scheduled as yet and the BHA these days puts as much emphasis on pastoral care for a jockey in the early stages of such cases as it does on regulation. But the form book suggests there will be a hearing around the end of the year resulting in a suspension of perhaps six months for a first offence, if there are no major aggravating or mitigating features, backdated to the time Evans stopped riding. He is therefore likely to return in good time for the start of the next Flat season.

I had hopes of Caviciana (2.08) when she moved into handicap company for her new yard and indeed she nicked a place at Market Rasen at 25-1 in the summer. She was third again last time but steps up to three miles at Ffos Las now, which ought to help this lumbering sort.

Sam Twiston-Davies climbs aboard, which seems a positive sign, and the winner of her last race has won again since, while the fourth was beaten half a length next time. Meanwhile, Caviciana’s rating has only gone up 1lb since her Rasen effort, so 6-1 looks pretty good.

At Warwick, Regarding Ruth (1.45) turns up, having been taken out of an easier race at Huntingdon the day before. She lost her form when the ground turned soft last season but had won on fast ground on her reappearance, making her of interest. The addition of Bryony Frost is no bad thing either.

It’s a hot race and she’s 6lb higher than her last win but odds of 16-1, still available in places, underplay her chance.

Always knew Tewatia would shine in IPL for his batting: Coach Vijay Yadav

Wetherspoon to cut up to 450 staff at airport pubs