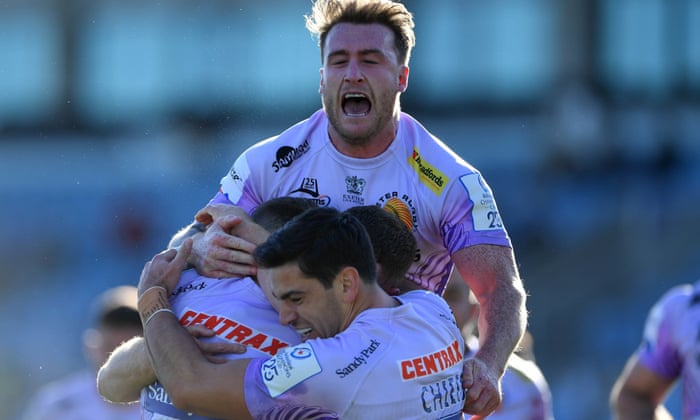 It will soon be the 10th anniversary of Exeter’s inaugural trip to France to play the first European away fixture in their history. They still talk about that October weekend with particular fondness, as much for a feisty 34-19 Challenge Cup victory against Bourgoin as the epic post-match party that followed. A decade on, a similar sense of wide-eyed excitement is now evident.

You could see it etched all over the faces of Joe Simmonds, his brother Sam and all the other Exeter players dashing to share in the celebrations of the 70th-minute try by their young captain that sealed the fate of the four-time European champions Toulouse on Saturday. If they can maintain the same emotional energy and purpose against Racing 92 in the final at Ashton Gate on 17 October, the holy grail of European domination will be within the West Country’s grasp.

Given they are already guaranteed a home draw in the Gallagher Premiership semi-finals the previous weekend, the next month could yet prove even more momentous but those waiting for Exeter to get carried away with themselves are forgetting the deep-rooted work ethic that has propelled the Devon club ever upwards since their promotion from the Championship in May 2010. There is more chance of Rob Baxter picking Rihanna at tighthead than letting his squad ease up now.

The lessons learned in their four previous Premiership finals – three of them lost – will also ensure Exeter’s players take nothing for granted despite the quality of the defensive performance that ultimately left a wheezing Toulouse on their knees. Baxter and his coaches had correctly identified the key to victory would be to play at a sufficiently high tempo in the first half, which would examine the visitors’ fitness later, and so it came to pass.

Racing, like Toulouse, possess gifted individuals capable of conjuring tries out of thin air but their ability to withstand an 80-minute pummelling by the fittest side in England will ultimately be the key factor. The formidable Dave Ewers topped the official tackle count on Saturday with 17 while Exeter’s front five made a further 62 tackles between them. With Harry Williams and Sam Simmonds scoring three of their team’s four tries, Exeter’s forwards have now collectively contributed 67 tries in all competitions this season.

To complement the collective power, however, they also have the pace and purpose of Stuart Hogg and Jack Nowell and the class of Henry Slade, currently a joy to watch. It says plenty for the 23-year-old Simmonds, then, that Baxter has entrusted him with the on-field captaincy despite the presence of so many proven international players and the fly-half again underlined to Eddie Jones that, if selected, he could grace the Test arena as well.

The fact the final will be staged just up the M5 in Bristol, where Exeter have already played and won recently, does no harm even if one or two might privately have fancied an all-English showdown with Saracens as a means of settling a few old scores. With their injured winger Olly Woodburn also hoping to return against London Irish on Wednesday, the only downside remains the continuing absence of the loyal supporters who have been there for every previous step of the club’s evocative journey.

How many celebratory pints would have been poured in Sandy Park’s multiple bars after the groundbreaking result on Saturday? Imagine all that lost income and the snaking queues outside the club office for tickets to the grand finale? Perhaps the best measure of Exeter’s latest joyous achievement is that, for 80 blissful minutes, all the game’s intensifying problems briefly ceased to matter.