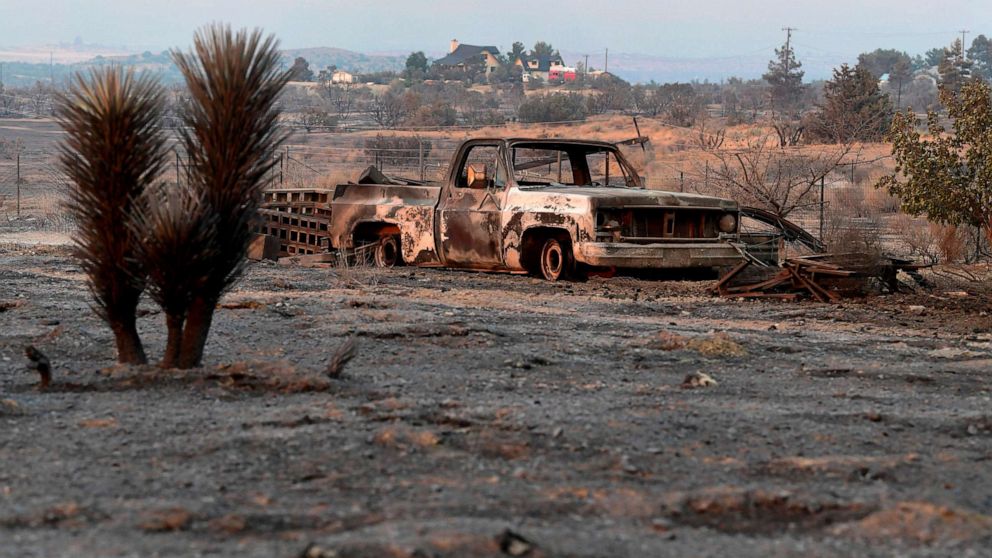 The consequences climate scientists have long been warning about are coming to fruition in the increased intensity of natural disasters around the globe, recently in the form of devastating wildfires that ravaged the western states and enshrouded areas not plagued with flames under hazes of smoke.

“What we’re seeing with the fire activity really is climate change, and it really is climate change smacking us in the face,” Dr. Phillip Duffy, climate scientist and president and executive director of the Woodwell Climate Research Center, told ABC News. “This year, certainly in the western U.S., is the worst fire year in recent history.”

We are “increasingly pushing our climate to the limit,” Dr. Kristina Dahl, senior climate scientist at the Union of Concerned Scientists, told ABC News, adding that the size and scope of the fires are “really consistent of what scientists have long predicted.”

Climate scientists who spoke to ABC News explained why the fires have gotten so bad.

Dozens of major wildfires were burning on the West Coast as of Monday, according to the Fire, Weather & Avalanche Center. The amount of forest area burned by wildfires between 1984 and 2015 was twice what would have burned had climate change not occurred, according to the 2018 U.S. National Climate Assessment.

However, it’s not that more fires are occurring, but rather, that there has been an increase in the number of large fires, Duffy said.

“These are not unprecedented events,” Dr. Crystal Raymond, climate adaptation specialist with the Climate Impacts Group at the University of Washington, told ABC News. Scientists know these types of fires burned in the late 1800s and early 1900s, but it’s the frequency at which they’ are now burning that has become a concern, she said.

“Climate change is expected to continue to cause our wildfire season to be longer and more intense, and so we do need to start preparing for a future in which we experience these longer, more intense wildfires more frequently,” Dahl said.

While the overall assumption is that the fires will get worse, people shouldn’t assume that every fire season will be worst than the last, Duffy said. The years 2017 and 2018, which saw the Camp Fire that accounted for more than 80 deaths in Butte County, California, were bad fire years, but 2019 was “relatively calm.” But just because the last fire season wasn’t record-breaking doesn’t mean the next one won’t be.

The warm, dry climate has always been the norm for much of the West and serves as fuel for the wildfires. But hotter temperatures on Earth as a whole are exacerbating typical environmental conditions in each individual location.

On the West Coast, it all has to do with a dry season that’s getting hotter and longer, Duffy explained. The heat leads to less snowfall during the wet season, meaning there’s less moisture on the ground to act as a fire redundant when the dry season arrives.

Severe drought, combined with record-breaking temperatures as well as high wind events and low humidity at the beginning of September, set the stage for the fires to ignite, Raymond said.

Areas not on fire are also affected

Millions of residents in the West who aren’t in areas immediately affected by the fire were still living under a cloud of hazardous smoke, setting off air quality alerts up and down the coast.

Apocalyptic photos out of San Francisco showed the city’s skyline beneath a dark orange haze in the middle of the day. And weeks after the wildfires broke out, the smoke had traveled 5,000 miles to Europe.

The smoke is so thick that it is blocking the sun and cooling what was supposed to be record-high temperatures in the month of September by about 10 degrees, Raymond said.

In a cruel twist of fate, the intensity of the fires and the smoke they release then creates a vicious cycle of releasing emissions into the atmosphere, thus warming the earth even more.

For example, while the West Coast wildfires are no where near as intense, it is estimated that the Australia brush fires that began at the end of 2019 released more than 800 million tons of carbon dioxide, nearly double the entire county’s annual emissions from fossil fuels, Dahl said.

Climate change isn’t the only culprit

The wildfires didn’t initially spark because of climate change. Many of this year’s fires began when California’s Bay Area experienced more than 12,000 lightning strikes in mid-August, Dahl said.

The ignition source of wildfires, whether lightning or human-caused, has “been around for millennia,” Brian Harvey, professor of fire and forest ecology at the University of Washington, told ABC News.

When you add a wind event on top of that, it then kicks the fires into high gear, allowing the fire to spread rapidly into communities, Harvey said.

“As the climate warms, the potential for those ingredients for fire to align with one another are increasing,” he added.

“Fire is really a critical and integral piece of a lot of our forests in western North America,” Harvey said.

Many trees in the West, such at the redwoods, with their thick, spongy bark, have even evolved to withstand these types of fires, Dahl said. The fires typically burn low to the ground, clearing the undergrowth as well as ensuring a healthy dispersal of seeds.

What can be done to mitigate the fire danger?

At this point, a reform in forest management wouldn’t be enough to stop the wildfires, Dahl said.

The obvious answer to stop the extreme weather events is to drastically cut down the greenhouse gas emissions entering the atmosphere and as soon as possible, according to the climate scientists.

However, this solution will require widespread policy change driven by political leaders. The best way individuals can act in that regard is in the form of civic duty and electing officials who have a clear agenda in protecting the environment.

“It will get worse unless we act,” Duffy said. “It’s important for folks to understand that we do actually control our destiny.”

More immediate solutions come in the form of clearing vegetation around structures and adhering to higher codes and using fire resistant materials when building new construction, which will help the structures survive the blazes. Also, removing “flying fuel,” such as dead branches and leaves, will help reduce the spread of fires.

People also need to think about where they live, the experts say. A large population has moved into “wildland urban interface” to get more space and closer to nature, Raymond said. But this type of location puts people and buildings into harm’s way, she added.

We will continue to see more extreme weather

While the incremental rise in global temperatures itself does not mean much to people, the consequences of that warming will, Raymond said.

Elsewhere the world, extreme fire events will continue to get more extreme, including flooding, both in the form of precipitation and storm surge, drought and extreme heat. There will be more destructive hurricanes, both in the form of wind strength and in the amount of rain the storm system can hold, which will be at its worst when the storms are slow-moving over land, like when Hurricane Harvey dumped 50 inches of rain in some parts of the Houston area in 2017, Duffy said.

“We do, as scientists, need to be clear that it isn’t necessarily climate change that’s causing these problems, Raymond said. “But it’s definitely making them worse.”