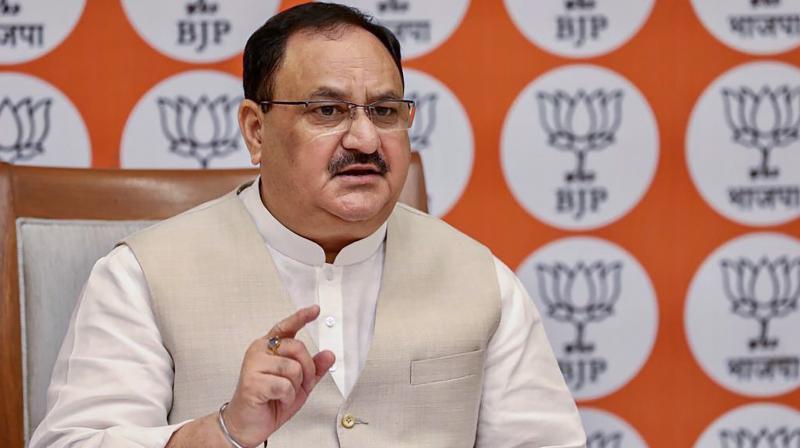 New Delhi: The BJP on Saturday effected a major reshuffle of party positions aimed at giving it a less north Indian look. This brings in several new faces, but also the omission of some from the south who had a reputation for having a mind of their own.

The highlights of the new list are the replacement of several general secretaries, including Ram Madhav, P Muralidhar Rao and Anil Jain.

The other important move, again relevant to the South, is the appointment of Tejasvi Surya, lately the blue-eyed boy of the BJP propaganda arm, as the party's youth wing president.

A third significant shift is the inclusion of West Bengal leader Mukul Roy, and Vinod Tawade and Pankaja Munde of Maharashtra in a team that used to look very north Indian.

Mukul Roy has been made a vice-president of the party, and Tawade and Munde are now secretaries.

Along with Ram Madhav and Muralidhar Rao, another leader to lose her prominence is Uma Bharti, never a favourite of the Modi-led dispensation. She has been dropped as vice president. Other casualties are Vinay Sahasrabuddhe, Prabhat Jha, Om Prakash Mathur and Shyam Jaju, and Saroj Pandey.

There are now five new general secretaries among the total of eight: Dushyant Kumar Gautam is the Dalit; N T Rama Rao's daughter D Purandareshwari has been drafted into the team to steal some political space occupied by the TDP in Andhra Pradesh. C T Ravi of Karnataka has been brought in to balance a party dominated by B S Yediyurappa; and Tarun Chugh in Punjab is tasked to preserve the alliance with the Akali Dal, which is now in a sulk over the farm bills.

Only Bhupender Yadav, Kailash Vijayvargiya and Arun Singh have retained their position as general secretaries. They occupy a critical position in the organisation as they are often put in charge of states and serve as a link between the regional and central leaderships.

After the list was reveleases, sources put out the spin that the BJP leadership has chosen to go with a horses for courses policy, meaning the new team is meant to chase new objectives.

The spinmeisters said those who have been dropped should not be judged negatively. However, some may have been dropped for reasons like their wont to make comments which have repeatedly irked the leadership and non-performance, they added.

One curiosity amidst these changes is the number of national spokespersons. There are now 23, with MP Anil Baluni as the chief. The new spokies include Rajyavardhan Singh Rathore, Rajiv Chandrashekhar, Tom Vadakkan, and Guru Prakash, a Dalit.

The fact that Amit Malviya remains in charge of the party's IT wing means that the BJP's ardour for propaganda remains undiluted despite Subramanian Swamy carrying out a acidic campaign against Malviya.

Tthe party has not filled vacancies in its parliamentary board, its highest decision-making body. Some vacancies in other positions also remain.

A Cabinet reshuffle is also said to be due but that is Modi's sole preserve. No spinmeister can speak for the PM.

The number of women in the national office bearers list has risen to 13 from eight earlier.

It has, however, not announced the head of its women's wing.

Bihar to go for three-phase poll from October 28; counting of votes on Nov. 10