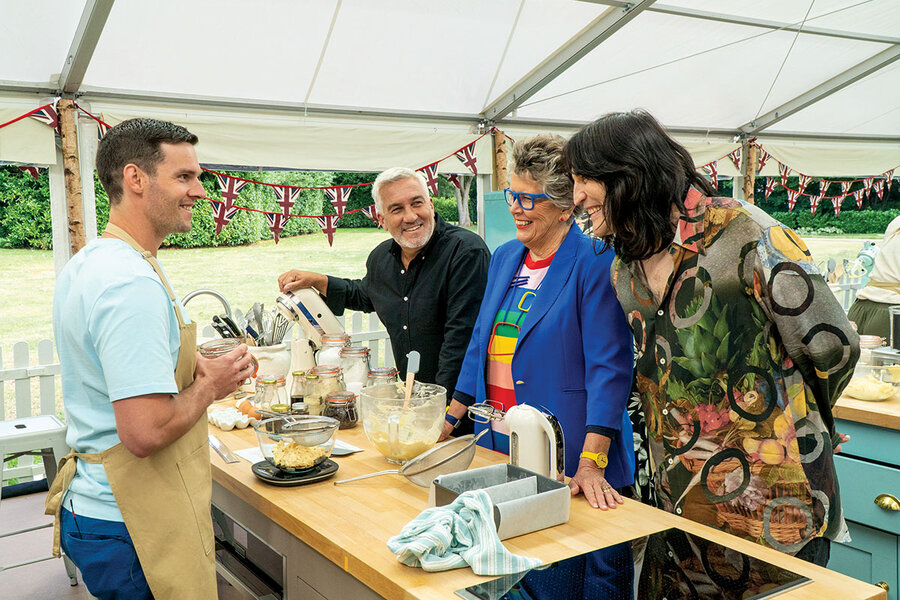 If you need a break from the real world (and who doesn’t these days?), put on the kettle, get out the Earl Grey, and settle in for a bounty of entertainment from across the pond.

One of Britain’s sweeter exports, “The Great British Baking Show” (rated TV-14), recently kicked off its 11th season and literally crashed back into our viewing lives when one contestant rammed into another in the season’s debut in September. The program has become too precious by half and the humor a smidgen too awkward, but remains quite charming, in great part because it is, well, a very nice show. That may sound vanilla, but it’s reassuring to watch a dozen bakers compete over 10 weeks in their pandemic bubble, always respectful and utterly kind to one another as they vie with great sincerity for a title, a cake plate, and a bouquet of flowers.

For enjoyable family entertainment, don’t miss “Enola Holmes” (PG-13), another recent Netflix release. Starring Millie Bobby Brown, made famous by “Stranger Things,” this whimsical pastiche is rollicking good fun. Brown’s character, never imagined by Sir Arthur Conan Doyle but based on Nancy Springer’s young adult novels, is strong, inspiring, and witty. This spunky character drives the narrative, and the 2-hour movie flies by (even with some plot holes and general silliness) as she unwinds several mysteries, occasionally aided by her older brother Sherlock, played by Henry Cavill. No word yet on a sequel, but the director is already envisioning what’s next.

PBS, the presenter of much acclaimed British television, has two new modern, four-part offerings slated for release this fall. The first, “Flesh and Blood” (TV-14), kicks off on Oct. 4 (check local listings) and offers a complex family thriller starring Francesca Annis as a vivacious widow who falls for a retired surgeon, played by Stephen Rea, who may or may not have her best intentions at heart. No one is above suspicion, not her three flawed but well-meaning children or her nosy and meddling neighbor, played to creepy perfection by Imelda Staunton. Though a bit heavy-handed in spots, it really will keep you guessing as to whodunit right up to the twisty ending.

You may think you’ve had enough of politics this year, but veteran writer Sir David Hare has scripted the intriguing “Roadkill” (TV-14), another PBS offering, debuting Nov. 1. The unsettling and edgy series follows a self-made salesman who carves out a high-profile place in the British government, consistently rising to the top in spite of, and thanks to, Machiavellian schemes and a self-serving lifestyle. Though the conceit is rather worn, Hugh Laurie makes for a compelling central character as you watch him consider his moves and then surprise you with the unexpected in this ruthless game of politics.

For fare from elsewhere in the British Isles, consider “The South Westerlies,” a cheeky six-part Irish series set in a very picturesque, West Cork village available from Acorn TV starting Nov. 9. Orla Brady plays a single mother who returns to a vacation haunt from her youth to secretly sway villagers to vote for an offshore wind farm. The show is more than a little derivative – think “Local Hero,” that offbeat 1980s flick from idiosyncratic director Bill Forsyth – but less successfully quirky. And be prepared for characters whose lifestyle choices may raise eyebrows. Still, it entertains with a mixture of misunderstandings, romance, corporate double-dealings, and Brady’s compelling performance. Acorn will be debuting more original content early next year with “Bloodlands,” a police thriller set in Northern Ireland.

If you fancy a period drama, you can do no better than the visually appealing and well-crafted “Belgravia” (TV-14), written by Julian Fellowes (“Downton Abbey”). Beginning at the battle of Waterloo and set against lovely 19th-century backdrops, this six-part series plays out much like a tale from Dickens as the lives of three families are intertwined and threatened by scheming servants, misconstrued events, and bold men with great expectations. Released in the spring, it can be watched on Epix platforms.

BritBox, a streaming option, is entering into the original content game early next year with four new series (not yet available for review). “Crime,” written by Irvine Welsh (“Trainspotting”), features a detective searching for a missing schoolgirl; “Magpie Murders,” adapted from the bestseller by Anthony Horowitz (“Foyle’s War”), follows an editor who is given an unfinished manuscript that alters her life; “The Beast Must Die” is a revenge thriller about a grieving mother seeking justice; and “A Spy Among Friends” is based on Kim Philby’s actual espionage at the beginning of the Cold War.

Many British shows have shorter seasons than those in the United States, which means viewers can often enjoy an entire series in one weekend. Just remember the treacle tart to go with your cuppa.

Slipping into a subjunctive mood