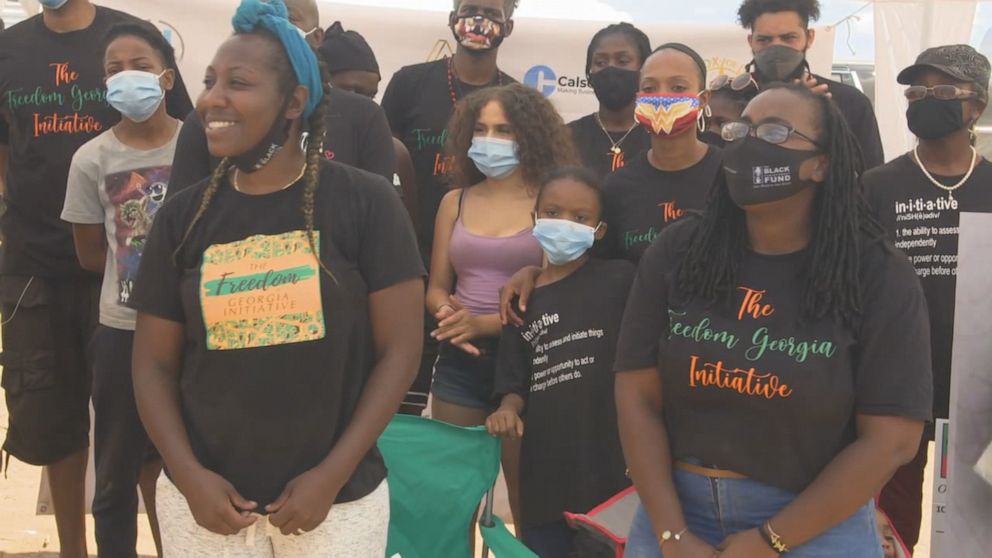 This report is part of “Turning Point,” a groundbreaking series by ABC News examining the racial reckoning sweeping the United States and exploring whether it can lead to lasting reconciliation.

For now, the small parcel of land known as Freedom, Georgia, is just a campground on red clay under the hot sun. But for the Black Americans who are moving here, it’s a dream.

So far, about 19 families, most of whom are from Georgia, have pooled their money to buy the nearly 97 acres of land in Wilkinson County, which is located about two hours south of Atlanta. It’s their escape, they said, from the everyday racism that feels like a part of life in the United States.

The final push to make the move came this summer after seeing images of Black Americans like Jacob Blake in Wisconsin and Ahmaud Arbery in Georgia being gunned down by white police officers and white neighbors, many of them said.

“We came together and we said, ‘You know what, we don’t like being slaughtered in the streets. We don’t like our children being there, being at the mercy of some psychopath that wants to tackle us and arrest us and bang our heads. We don’t want that. So how about we just come together and build our own,’” said Dr. Tabitha Ball, a licensed clinical psychologist from the Atlanta suburbs.

Renee Walters and Ashley Scott started the campaign to buy Freedom after Walters saw a viral post about buying a town “for the price of a New York apartment.”

“So when I looked at it, I saw I had all these parcels and acres. I called my friend, [Ashley], who is one of the most amazing realtors in Atlanta, and I said, ‘Sis, we have to go,'” Walters said.

The people in Freedom include a range of professionals from doctors to real estate agents. Still, the group needs to build roads and establish running water and electricity before it can start building homes.

This is not the first time that people who felt persecuted or unwanted have pulled up stakes to settle somewhere new. Immigrants from Ireland, Italy and Germany all fled Europe and moved to the United States around the turn of the 20th century in hopes of building better lives, and created ethnic communities here.

Conservative Dutch communities left the motherland in the mid-1800s to set up Holland, Michigan. To this day, its tulip festival and iconic windmills are mainstays.

But those are examples of Americans who feel they can walk freely in this country, which, for many Black Americans, is still not the case today.

The Browns are one of many black families from across the country that came to see Freedom for themselves during an event that was held over the Labor Day Weekend. They drove down to Freedom from their home in Chicago.

“I think that if we want to feel safe [and] secure and be able to honor our culture, our heritage and plan for our children and not have to worry about what happens to them when they leave out the door, we have to … not necessarily segregate, but have our own [space],” Marissa Brown said.

“There are so many communities that have their own space, and it’s not that we’re anti-anything… We have to be pro-black love, and black love matters. Black community matters. Black power matters,” Brown added.

Historian Kendra Taira Field, an associate professor of history at Tufts University in Massachusetts, underlines that Black Americans have tried to set up their own communities like Freedom before. She said the reason they’ve done this has been to escape racial violence, and pointed to examples in Nicodemus, Kansas; Eatonville, Florida; and Mound Bayou, Mississippi.

She said these all-Black communities sprung up at times when Black Americans were lynched and hung from trees in their neighborhoods.

“There’s a really rich and long history of African American emigration both domestically and also abroad. For instance, [the] ‘Back to Africa’ moment, and [it’s] almost always in response to … the history of racial violence and economic exploitation in the U.S.,” Field said.

Field said that Black Americans often decide to segregate themselves because, for them, it feels safer to only be surrounded by their own people. They feel it gives them a chance to thrive.

Field knows this personally; her family started an all-Black settlement in Oklahoma.

“Then when that fell through, and Oklahoma ended up looking a lot like Mississippi in terms of its Jim Crow laws, they were participating in a ‘Back to Africa’ movement,” she said. “They ended up helping to purchase a ship for $69,000 in 1913 and [1914], and actually migrating to the Gold Coast, which is now present-day Ghana.”

Ghana has now produced one of the world’s fastest growing economies, according to the International Monetary Fund. The African country’s success ranks alongside several countries in Europe.

In recent years, Black Americans searching for a real-life Wakanda started moving to Ghana in droves.

Rashad McCrorey, 40, from Harlem in New York City, moved to Ghana during the COVID-19 pandemic to run his travel company, Africa Cross-Culture. He said he is now living his best life with no thoughts of looking back.

“I feel myself healing. I’m starting to see Black people with loving unity,” McCrorey said. “It’s all part of this systematic injustice that put us in a condition where a lot of times we have to come out of America to heal — to be places where we’re not always the victim. We’re not always in protection mode.”

For the first time in his life, McCrorey said he is not afraid of the police. There, he said, he’s seen citizens have altercations with officers without it ending in violence or death.

Even the music he listens to in Ghana is different than in the states, he said.

“[With American music], it’s drugs, drugs, murder, murder, you know, on everything. Here we’re not hearing that on everything,” McCrorey said. “It’s a lot of things going on in America that as Black Americans, we need to get away from sometime … [and] see what real healthy living is about.”

For those who are settling in Freedom, Georgia, it’s a new beginning for them, too. Co-founder Ashley Scott says Black Americans today are suffering trauma and the solution for them is to get away.

“This land is to be an example and an inspiration to other families that you, too, can buy land together and create the village that you want for yourself,” said Scott during a cookout and ribbon cutting for the new city.

“This is our village. We are a village of families and we happen to be Black families. But what we want is for all families to have an experience, that same power of doing something together and building something for ourselves. That is what this mission and this movement really is.”