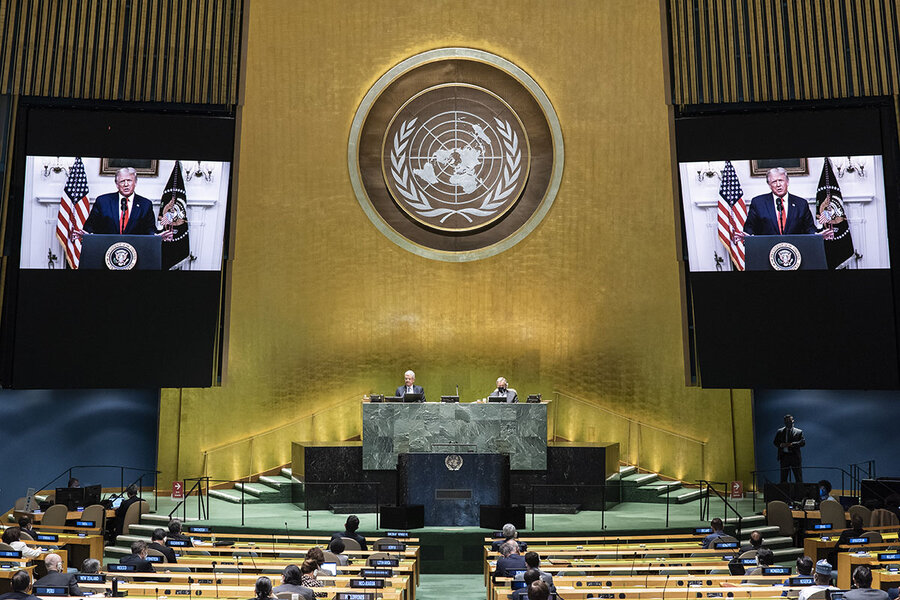 The coronavirus pandemic has clearly dealt a blow to the “we’re all in this together” spirit that animates the U.N., and which has only grown in importance over recent decades as the world has increasingly globalized and confronted issues that know no borders.

Another blow to the U.N.’s multilateral underpinnings was struck by the heightened tensions and caustic rhetoric on display between the United States and China – the former the U.N.’s historical leader, the latter the rising superpower and pretender to America’s global leadership throne.

President Trump in his taped speech spoke of the “China virus” ravaging the globe – and for which he said Beijing must pay. In response, China’s ambassador to the U.N., Zhang Jun, rose to the dais in person before Chinese leader Xi Jinping’s taped speech to dispute Mr. Trump’s accusations and suggest instead that the U.S. president had introduced a “political virus” antithetical to the spirit of the U.N. to the global body.

Yet as gloomy and jarring as much of this year’s largely remote proceedings have been, there is also a hopeful sense that the world, coming together, can overcome the challenge of the pandemic, just as it fashioned a system of global cooperation out of the ashes of World War II.

As U.N. Secretary-General António Guterres noted in his address opening UNGA Tuesday, the world is at “another 1945 moment,” referring to the hinge year that saw both the end of World War II and the founding of the U.N.

“I heard that as Guterres being optimistic and aiming for the inspirational,” says Francine D’Amico, a professor of international relations and specialist in the U.N. and international institutions at Syracuse University. “I think he was saying the international community needs to act as it did in 1945, when it came together and established the first truly global institution.”

Instead, she adds, “many believe we are at a 1939 moment,” when the world fractured and marched off to a world war.

Mr. Guterres reassured his global audience that, provided the nations of the world together dip into the well of international cooperation and reject a resurgent nationalism, the world is up to the task of addressing the dire threats it faces.

That includes the pandemic. Noting that many of the globe’s best minds are racing to produce a COVID-19 vaccine in record time, Mr. Guterres warned against a “vaccinationalism” that would narrowly address the needs of some, largely in the world’s wealthiest countries, while leaving many in less-developed countries behind.

Talk of another cold war

Yet despite the hopefulness of pandemic-inspired cooperation, this year’s UNGA has laid bare the other challenge that very few were talking about a year ago, the rising tensions between the global body’s two biggest powers, the United States and China.

New this year is talk of another cold war, which many believe would undermine international cooperation and U.N.-led multilateralism farther into the future than COVID-19.

As French President Emmanuel Macron warned in his UNGA address, the mounting tensions between the U.S. and China threaten the U.N. with “impotency” at a time when multilateral action is essential to addressing global threats – from destabilizing regional conflicts and growing inequalities to the significant and varied impacts of climate change.

What worries many is that a U.S.-China cold war could cause a return to the inertia the international community experienced during the decades of the U.S.-Soviet Union standoff. “We’re seeing that the U.N. could very much be hamstrung as it was during the Cold War,” says Professor D’Amico.

European leaders in particular appear determined not to let rising U.S.-China tensions derail their efforts at safeguarding and promoting multilateralism despite an increasingly hostile global environment.

Pointing to the Franco-German alliance for multilateralism being advanced by Mr. Macron and Chancellor Angela Merkel, one European diplomat says, “We will continue to do that, whatever the situation is between the U.S. and China. We have no time to wait.

“We cannot remain in the margins and say, ‘It’s terrible, but we can’t do anything because the two big powers are having their discussions,’” adds the diplomat, who spoke on condition of anonymity to discuss openly the tensions at UNGA.

Europeans readily acknowledge that they too have their issues with China – but they add they prefer dialogue and diplomacy where possible over confrontation.

“We also have our discussions with China,” says the European diplomat, using a diplomatic replacement for “differences.” “We have issues to discuss such as human rights. We are also competitors with China. … We also want a level playing field and reciprocity. But if we want to face global challenges,” he adds, “we have to work together.”

Mr. Xi in his speech deftly appealed to much of the world’s preference for cooperation over the go-it-alone, America-first approach espoused by President Trump. Where Mr. Trump condemned the World Health Organization for helping China cover up the emerging virus, Mr. Xi lauded the WHO’s “essential work” and pledged to boost China’s funding of the global health organization.

And where Mr. Trump blasted the “one-sided” Paris climate accords that he withdrew from in 2017, Mr. Xi announced a new commitment to make China carbon neutral by 2060.

Not that the world takes the Chinese word hook, line, and sinker. Indeed, Mr. Xi’s virtual audience on social media platforms was generally harsh, a kind of bottom-of-the-screen reality check highlighting China’s mass detention of Muslim Uyghurs and its strong-arming of Hong Kong.

But by and large Mr. Xi’s solidarity on the coronavirus, commitment to share globally any COVID-19 vaccine China develops, and special shoutout to China’s south-south dialogue and “commitment” to African partners, were all much more soothing to the U.N. ear than Mr. Trump’s nationalist rhetoric and America-first pandemic focus.

Mr. Trump did speak of America’s “destiny as a peacemaker” as he referenced the recent U.S.-brokered Serbia-Kosovo accords and normalization of relations between Israel and both the UAE and Bahrain.

But over all, what many observers have heard this week is a China stepping up to the leadership plate, and America pulling back.

“The U.S. chose multilateralism in 1945, and we were able to remake the world in our image, and in ways that served our interests,” says Professor D’Amico. “But now Trump’s theme seems not to be America as leader or partner, but more of an America-focused individualism,” she says.

One example: The U.S. effort this week to reimpose U.N. sanctions on Iran – a move even America’s closest allies have rejected as having no standing since Mr. Trump pulled the U.S. out of the Iran nuclear deal in 2018. Indeed, the administration is wearing its loneliness on Iran sanctions as a badge of honor.

As the U.S. ambassador to the U.N., Kelly Craft, said this week, America does not “need a cheering section to validate our moral compass.”

But neither can a superpower in withdrawal mode retain its global influence, others say.

“The problem is that if you’re not on the field, you can’t play the game, and you leave the field open to China,” Professor D’Amico adds. “If you walk away from the table, you have no say in who’s going to be calling the shots.”