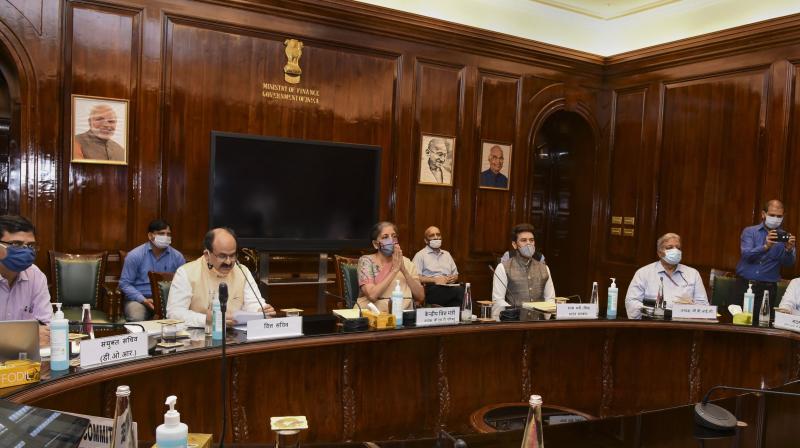 New Delhi: The central government on Saturday wrote to states suggesting options of borrowing money to make up for the Rs 2.35 lakh crore shortfall in GST revenues expected in the ongoing fiscal.

Two days after first suggesting to states to borrow money to make up for the shortfall at the GST Council meeting, the finance ministry wrote to state governments saying they could borrow either via a special window it will facilitate through the RBI or raise debt from the market.

While the Centre has reasoned its recommendations on premise that it is already saddled with a large borrowing requirement given the slowdown in revenue collections due to a slump in the economy, non-BJP ruled states such as Punjab, Kerala, Delhi and West Bengal have already stated that raising debt is not an option for already stretched state finances.

In a letter to finance secretaries of all states and union territories, Union Finance Secretary Ajay Bhushan Pandey said while additional borrowing by the Centre influences the yields on central government securities (G-secs) and has other macro-economic repercussions, the yields on state securities do not directly influence other yields and do not have the same repercussions.

"Hence, it is in the collective interest of Centre and states and in the interest of the nation and of all economic entities including the private sector, not to do any avoidable borrowing at the central level when it could be done at the state level," Pandey wrote in the letter.

Compensation payment has been an issue since August 2019 with GST collections faltering. In the current fiscal, the compensation requirement of states has been estimated at Rs 3 lakh crore, of which Rs 65,000 crore would be funded from the revenues garnered by levy of cess. This leaves a shortfall of Rs 2.35 lakh crore.

The Centre has estimated that of this Rs 2.35 lakh crore, Rs 97,000 crore compensation requirement is due to GST rollout and the remaining is on account of the impact of COVID-19 on the economy.

In the GST Council meeting on August 27, Finance Minister Nirmala Sitharaman had said that COVID-19 is an "Act of God" and it was necessary to differentiate between GST shortfall and the pandemic-related shortfall.

Giving two options, she said states can borrow either Rs 97,000 crore — the deficit arising out of GST implementation — or the entire Rs 2.35 lakh crore.

States, on their part, have said that such a distinction is not constitutionally valid.

Explaining in detail the borrowing options to meet shortfall, Pandey said borrowing by states typically incurs a higher interest cost than borrowing by the Centre.

"The Government of India is conscious of this and has factored this (in the options) with a view to protecting the states so that they are not adversely affected," he wrote.

Under the first option, if the states choose to borrow Rs 97,000 crore, which is the shortfall arising out of GST implementation, under a special window, the Centre will endeavour to keep the cost at or close to the G-sec yield.

Such a borrowing would be over and above any other borrowing ceilings for which a state is eligible.

"The interest on the borrowing under the special window will be paid from the cess as and when it arises until the end of the transition period… The state will not be required to service the debt or to repay it from any other source," the letter added.

"The borrowing under the special window will not be treated as debt of the state for any norms which may be prescribed by the Finance Commission etc," It said.

Under the second option, the entire shortfall of Rs 2.35 lakh crore will be borrowed by states through issue of market debt.

The interest shall be paid by the states from their resources, while the principal on the amount under will be paid from proceeds of the cess.

"To the extent of the shortfall arising due to implementation of GST (i.e. Rs 97,000 crore approximately in aggregate), the borrowing will not be treated as debt of the state for any norms which may be prescribed by the Finance Commission etc," the letter added.

Pandey said the GST Act lays out the spirit and purpose of the GST compensation — to compensate states for loss of revenue arising on account of implementation of GST.

"The wording of the Constitution and statutory preamble make it clear that the spirit of the law is not to compensate states for all types of revenue losses, but rather for that loss arising from GST implementation," he said.

"It is the correct and proper interpretation which was thoroughly discussed in the GST Council and in Parliament before the relevant legislation was passed," it said.

"The Government of India will support extension of the compensation cess for such period as may be necessary to completely discharge any arrears of compensation," Pandey said.

Pandey along with Expenditure Secretary T V Somanathan would address queries of the states relating to these options on September 1, an official statement said.

Boeing goes from bad to worse