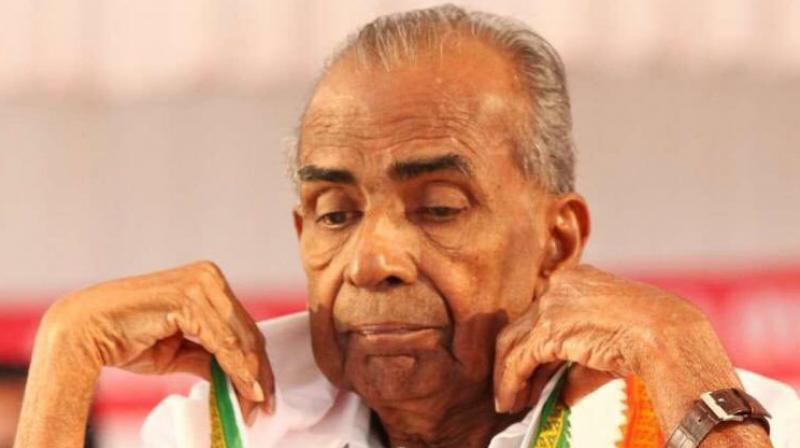 Kottayam: Senior Kerala Congress leader and Changanassery MLA C F Thomas died at a private hospital in Thiruvalla on Sunday, party sources said. He was 81. He had been undergoing treatment for some ailments, they said.

Thomas represented Changanassery constituency in the Kerala Assembly since 1980 without a break. He was a minister in the Congress-led UDF government during 2001-2006.

He was a close confidante of the late Kerala Congress (M) leader K M Mani.

Thomas was associated with the P J Joseph faction in the Kerala Congress (M) due to the rift between two groups in the party following Mani's death in April last year.

Commencing his political activities while he was a student, Thomas joined the Indian National Congress and then became vice-president of Changanassery Town (West) Mandalam.

He joined Kerala Congress on its formation and rose up the party ranks. He also held the post of state general secretary and Chairman of Keralga Congress (M).

His funeral will be held at a churchcemetery in Changanassery on Monday.

Leaders cutting across party lines today expressed their condolences over the death of Thomas.

Kerala chief minister Pinarayi Vijayan said Thomas was a leader who rose above politics and worked for the progress of the state. "He placed great emphasis on moral values in public service. Despite his bad health, he was working for society. I was close with CF for decades. He was extremely modest in his conduct as well as in his political activities," Vijayan said.

Leader of the opposition in the Kerala Assembly, Ramesh Chennithala said Thomas was a leader who laid down his life for the common man and the poor. "He possessed a personality which was not even slightly tainted. Simple life was his hallmark. Thomas was a prominent leader in Kerala politics and the United Democratic Front," Chennithala said.

The October Surprise nobody wanted

Political violence is coming from one direction in this country: The far right