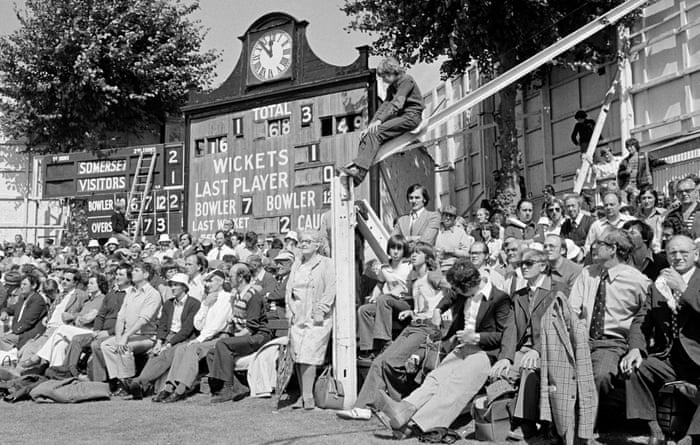 The two best teams in county cricket battled for the Bob Willis Trophy at Lord’s. Despite the absence of spectators it was an earnest, engaging contest and a curious throwback to four decades ago when Essex and Somerset were also two of the best and most entertaining sides in the country.

This is not so surprising if you recall some of the personnel: the trinity of Viv Richards, Ian Botham and Joel Garner at Somerset and Keith Fletcher, Graham Gooch and John Lever at Essex were instantly recognised on TV screens against a backdrop of packed stands at Chelmsford or Taunton. Cricket had yet to be swamped by what is now quaintly described as association football; Botham was probably the most recognisable of all English sportsmen; Jim Laker was still lugubriously droppin’ his gs to a large audience on BBC TV.

Somerset won five one-day trophies in five years, breaking their duck with the Gillette Cup and John Player League in 1979. In that same year Essex won for the first time, walking off with the County Championship and the B&H Cup. Thereafter Essex managed to create a longer-lasting legacy; during the next 13 years they would win five more Championships, usually with Fletcher at the helm shrewdly pursuing victory at all costs. He knew how every county batsman played even though he could never remember their names and occasionally he charmed opposition captains into a “brave” declaration, which would soon look foolhardy. Then he would smile sheepishly, another vital victory notched.

For example at Taunton in 1985 Botham obliterated the Essex attack, smashing 152. I recall batting with him and there was a delay of about two minutes after every Botham single since deep midwicket had to trundle to second slip when I was on strike. Sadly it rained after that Botham blitz on the first day and ‘Fletch’ persuaded Botham, who was captaining Somerset, that we should contrive a game. He even managed to negotiate that Essex should be allowed to score 68 runs in their first innings during which time Gooch was dismissed by the irregular bowling of Julian Wyatt, to reduce their target on the final day. So Somerset forfeited their second innings; Gooch came out to bat again, smashed Ian and the rest of the “proper bowlers” (except Garner, who was unfit to bowl) all around the ground, hitting an unbeaten 173 out of the 296 Essex needed before the match had reached the last hour. Typical Fletch; typical Gooch, and another unlikely Essex victory.

Essex were great fun to play against and they were very funny. Where they were undoubtedly superior to Somerset, who were not a humourless crew especially when Ian was in charge, was that they could be hilarious and ruthless simultaneously. Fletch looked on with benign resignation at the motley, slightly mad, gifted crew of cricketers at his disposal. He was too wise to try to quash their idiosyncrasies.

A last-wicket partnership between Lever and David Acfield was hilarious to behold until you realised that they had somehow added another 25 runs. At the crease Acfield would bellow to one and all about the inadequacies of his batting, inviting sympathy and encouraging the presumption of his immediate dismissal, all of which seemed to be a distraction to the bowlers. For Lever, who was, in fact, a much better batsman than he pretended, taking guard from the umpire was a pretentious ritual; so he never bothered.

Ray East knew how to bat as well but was almost as self-deprecating at the crease as Acfield. Against fast bowlers, having decided that a bouncer was due, he would sometimes dive to the ground as if a bomb was being dropped from on high just as the ball was delivered; he would confuse wicketkeepers with his double-sided bat and he was a mime artist of the highest order. A vignette still lingers of a break in play at Taunton. There had been some rain so there were piles of sawdust at each end. East surreptitiously picked up some of the sawdust in his left hand and before long an alert spectator waiting for play to resume could watch him tilt his head, and then tap it hard. Out of his hand which was now stationed against his lower ear the sawdust fell to the ground. Jacques Tati could not have done it any better.

Then there was Keith Pont, who very early in his career found himself fielding at third man at both ends at Ilford. He spotted a stray and redundant bicycle on the boundary’s edge and at the end of the over he leapt upon it and merrily cycled across the square to third man at the other end. Fletcher shrugged his shoulders and may have hidden a wry grin. He didn’t mind what they did provided they strove for victory. Odd that such an enterprising captain should be so cautious in outlook when he became England captain and coach.

Essex did not always prevail. An epic Gillette Cup semi-final at Taunton in 1978, as both sides sought their first trophy, was tied with Somerset advancing, having lost fewer wickets. On that occasion Viv Richards tamed the Essex bowlers as only he could, yet Essex only failed to reach the final by about two feet. Then they were straight into our dressing room to share the celebratory drinks.

In the recent contest at Lord’s such mingling was less likely and only Alastair Cook is instantly recognisable to the casual cricket fan but that may change, such is the talent in the two sides. And there were no bicycles lying spare beyond the boundary rope.