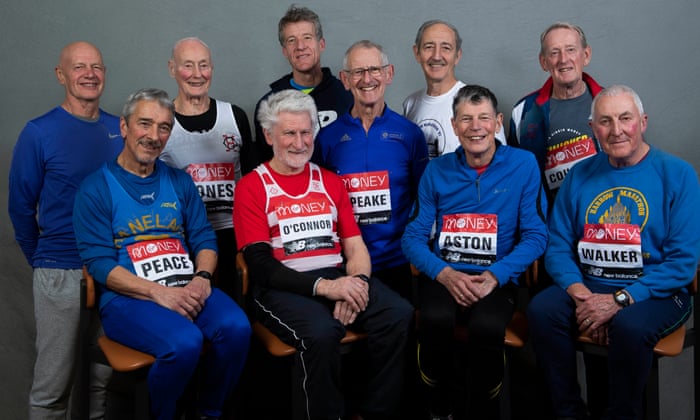 It is more than two decades since Ken Jones nearly lost his record of finishing every London Marathon, but the 87-year-old still has flashbacks. “In 1998, I slipped on a manhole cover two miles from the finish,” he says. “I cut my eye badly and I was unconscious. They were trying to get me in an ambulance and I fought my way free to carry on, blood running down my face. A few other runners helped me get to that line – there’s a lovely spirit about the marathon.”

Jones is one of 10 ever-presents remaining from the 7,055 runners who began the first London Marathon on a dank and drizzly March day in 1981 – and have never stopped taking part. “I remember coming over Tower Bridge that day and seeing the massive crowd and thinking: ‘I’ve never seen a scene like this before and I’ll probably never see it again,’” says 75-year-old Bill O’Connor from Finchley, north London. “Well, I’ve seen it 39 times now.”

All who will be running on Sunday to reach 40 not out have become firm friends. After the 15th race in 1996, organisers set up the Ever Presents club to recognise their achievements with a special medal and a guaranteed entry to future races. At that stage there were 46 members, but their number has slowly shrunk to 10, all of whom received a Spirit of London award – reserved for true exceptional performances – in February.

The remaining band of brothers are now in their 60s, 70s and 80s but most have no desire to reach the end of the road. “The Ever Presents is perhaps the only club you can leave but you can’t join,” says Mike Peace, 70, who will be running in Dartmoor national park as part of the virtual London Marathon. “Some people say the only way they will leave is in a coffin, others that they would have to have no legs and be in a wheelchair to stop the sequence. I’m not quite sure I’m that extreme.”

Things have certainly changed since the race’s inception, when there were fewer than 300 women, very little fundraising for charity and no one in fancy dress. Back then, the sight of men in impossibly tight shorts weaving from Greenwich Park towards the finish at Constitution Hill was almost quixotic. Now, though, the marathon has become firmly established as one of the crown jewels of British sport.

But what has made so many persevere for so long, defying age, injury and whatever else life has thrown at them? It is, they agree, a combination of luck and “bloody single-mindedness”. The 78-year-old Malcolm Speake says: “In 2005 I had norovirus. Goodness, I must have vomited a gallon after that race. I thought at eight miles I was done but you find a way to keep on. It’s this streak, it makes me carry on.”

Being good club runners in the first place helps too, mind. The youngest Ever Present, Chris Finill, 61, from Cranleigh, Surrey, has run for Great Britain and England 14 times in ultramarathons and holds the world record for the number of sub-three hour marathons in the same race – 33 – between 1981 and 2013.

“I’ve been lucky enough to run for my country, run across America and keep my London Marathon streak alive – although there was a near miss in 2018 when I fell over after 3.5 miles and broke my arm in four places,” says Finill, who is running the virtual race from the Top Gear track in Dunsfold, Surrey. “I had to stop for five minutes while I got treatment from St John Ambulance but I still finished under four hours.

Nine of the 10 Ever Presents hope to be back next year, but for Charles Cousens this will be his final race. “But I’ve so many great memories,” says the 78-year-old. “A couple of years ago I got so hot I couldn’t see, so I asked this chap in the crowd if I could have his hat to keep the sweat out of my eyes. ‘You’ve got the same name as me – of course you can take it,’ he replied. It’s always been one thing in this country which is a happy event and you can’t say that too often these days.”

But there is a breath of sadness as David Walker, a 75-year-old from Chesham in Buckinghamshire, describes what happens when one member decides to call time. “At first as people dropped out I didn’t mind, as it made it more of an exclusive club, but now it is very sad,” he says. “The last two who went, I hung back with them at the start line. They wanted to be a ‘did not finish’ rather than a ‘did not start’, so I organised a few of the Ever Presents to walk with them until they came off the course so we could give them a hug.

“They still turn up at the beginning of each race so there is a very strong bond between us. To mark the 40th run I had organised a tour of Buckingham Palace this summer – but then the pandemic struck.”

While the forecast is terrible for Sunday, there is certainly no dampening of spirits. Roger Low, a 76-year-old from London, plans to celebrate what will be his 100th marathon with a second pudding – “if I want one” – while Jeffrey Aston, 73, Cardiff, says he plans to run it in six hours.

Terry Macey, 72, who is planning to run along part of the route before doing laps around Greenwich Park, says: “It is going to be great. My daughter is going to set up a base camp in the park and I will have friends and family dropping in and out to do laps with me.”

Even as his 90th birthday starts to loom into view, Jones promises he will be running 26.2 miles around the country lanes around his home near Londonderry. “I have gone from six‑minute miles and a personal best of 2 hours 41 to around double that time,” he says. “But there’s no way I would miss it.”

The Breakdown | James Haskell: ‘There are players all around with demons in their heads’