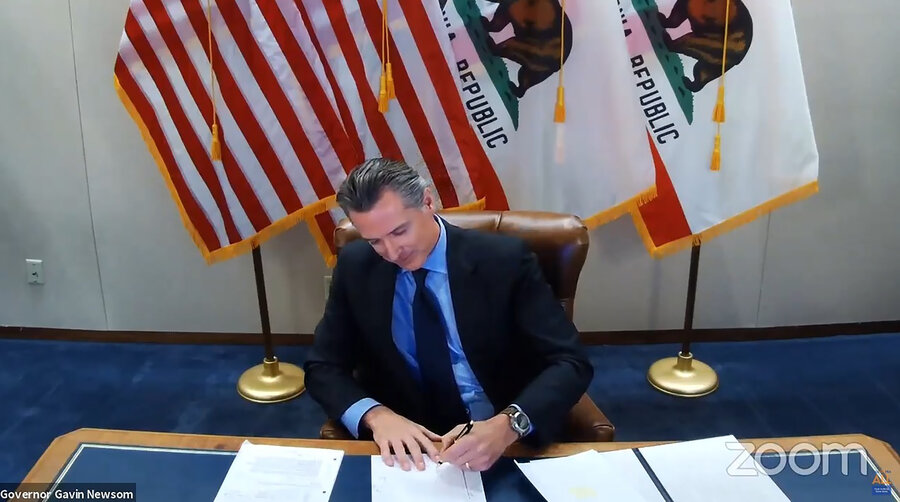 California will develop a detailed plan for reparations under a new law signed on Wednesday by Gov. Gavin Newsom, making it the first state to mandate a study of how it can make amends for its role in the oppression of Black people.

The law creates a nine-member task force to come up with proposals for how the state could provide reparations to Black Americans, what form those reparations might take, and who would be eligible to receive them.

“This is not just about California, this is about making an impact, and a dent, across the rest of the country,” Mr. Newsom said moments after signing the bill during a ceremony broadcast on his YouTube channel.

The law does not limit reparations to slavery, although it requires the task force to give special consideration for Black people who are descendants of slaves.

California never had a government-sanctioned system of slavery. It entered the Union in 1850 as a free state after gold was discovered in the Sierra Nevada mountains. But the state did let slave-owning whites bring their slaves to California. The Legislature even passed a law making it legal to arrest runaway slaves and return them to their owners.

The law does not say the reparations must be cash payments. Other options could include forgiving student loans and paying for public works projects or job training. In July, the City Council in Asheville, North Carolina, approved reparations by pledging to make investments in areas where Black people face disparities.

Reparations for slavery have been debated for decades in the U.S. A similar proposal to study reparations for Black Americans was first introduced in Congress in 1989. It has never passed, but Congress held a hearing on the proposal last year.

Momentum has been building once again for similar proposals in state and local governments across the country after the May police killing of George Floyd in Minnesota reignited a national movement for racial justice. State legislatures in Texas, New York, and Vermont have considered studying reparations, but none have passed measures.

Mr. Newsom would appoint five members of California’s task force. The other four would come from the Legislature, with two each appointed by the leaders of the state Senate and Assembly. The law says the task force must include at least two people from “major civil society and reparations organizations” and at least one person from academia who is an expert in civil rights.