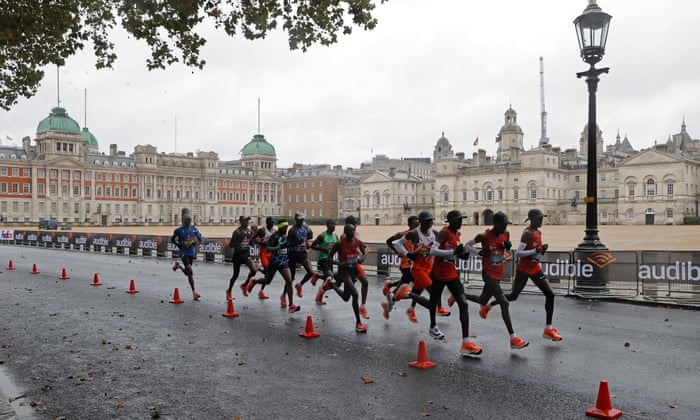 It was by common consent the most surreal London marathon in its 40-year history: with elite athletes cheered on by cardboard cutouts of the Queen across a special course in St James’s Park – and 43,000 people from 109 countries running the event “virtually” instead of on the capital’s streets.

However, organisers said they believed the “indomitable spirit” of every participant would serve as a beacon of light in dark and uncertain times – and that the race would help raise “tens of millions” for charities.

Hugh Brasher, the event director of London Marathon Events Ltd, said it had been the event’s strangest race. But on the day the race went global, with people from China to Costa Rica and Libya to Laos tackling the 26.2 miles on a course of their choice, Brasher said it was remarkable it had taken place at all.

“What we have seen sums up the indomitable spirit the London Marathon has always been about,” he said. “Britain has suffered from this unbelievably inclement weather from Storm Alex but over 30,000 people across the country have shown amazing fortitude in getting out and running or walking 26.2 miles. And to think we have had people from 109 countries taking part is quite incredible. I really hope it is a beacon of light in a year that’s been pretty dark.”

There was a shock in the men’s elite race as the world record holder, Eliud Kipchoge, was beaten for the first time in seven years. The Kenyan, who finished eighth, having won the race four times, said he had suffered from an “ear blockage” while running . He also appeared to be limping at the finish.

The race was won in a thrilling sprint finish by the Ethiopian Shura Kitata in 2:05.45, one second ahead of the Kenyan Vincent Kipchumba. Kitata dedicated his win to his country and his coach, Haji Adilo, who had been unable to travel to London after testing positive for Covid-19.

“I am very happy to win this race against a very strong field for my country and for my group of teammates,” Kitata said. “I will bring back my medals for my coach, who is back in Ethiopia.

There was no such surprise in the women’s race as the world-record holder, Brigid Kosgei, won in 2:18:58, more than three minutes clear of Sara Hall from the US.

Perhaps the most heartwarming story of the day came from Britain’s Natasha Cockram, who defied a cyst on her ankle and the lack of a sponsor to win her first national title by four seconds from Naomi Mitchell in 2.33:19, with Tracy Barlow third. 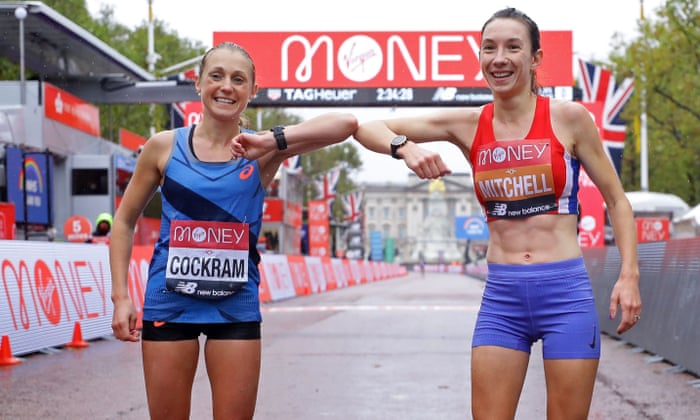 In August Cockram appealed on social media for some shoes to race the event as she did not have a sponsor, while she also had to overcome an ankle injury that put her involvement in jeopardy.

“This time last week I couldn’t even run, so wasn’t sure I’d make the start line,” said Cockram, who had been working full-time in pharmaceuticals until moving part-time last month. “I was in hospital getting an MRI and ultrasound, so I’m really happy with today.”

In the men’s race Sir Mo Farah’s unfamiliar role as a pacemaker proved successful as he helped his compatriots Jonny Mellor and Ben Connor sneak inside the Olympic qualifying time.

While the world’s best athletes raced 19.6 laps on a special closed course in St James’s Park, the everyday runners had 24 hours to run or walk 26.2 miles, using a special app to track their time.

The oldest participant was 87-year-old Ken Jones, who has completed every London Marathon since the first race in 1981. Jones, who ran near his home in Strabane, Northern Ireland, with his daughter, Heather, 58, said: “I’ve no plans to retire yet. I want to show people what you can achieve when you put your mind to it.” 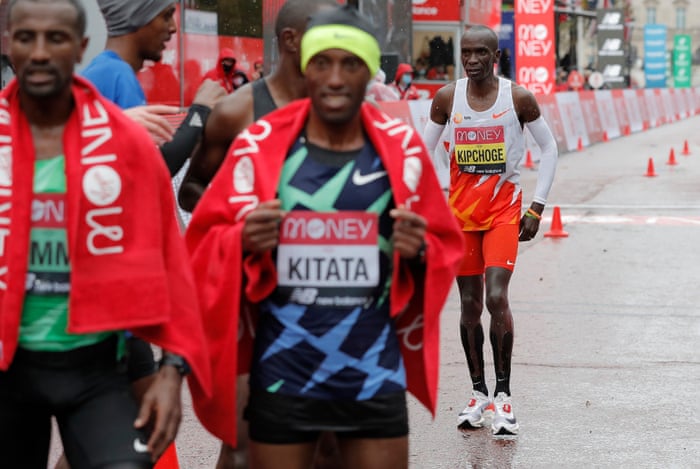 The conditions failed to stop some runners turning up in fancy dress – including Russ Brookes, who did his virtual race in Gloucester dressed as a dinosaur to raise money for the child bereavement charity Winston’s Wish.

Brasher said: “I’m so delighted we have been able to put the event on, given the global pandemic, and that tens of millions will have been raised as a result of this event. Will it be as much as a normal year? I’m sure it won’t. But the fact that we’ve got people from 109 countries doing it from around the world is incredible.”

“It certainly wasn’t what we expected at the start of this year and this is the strangest London Marathon ever but we’ve seen some great performances from the elite and everyday athletes in these unbelievably difficult conditions.”

Abhishek Sharma, Priyam Garg’s knocks get SRH to 164/5 against CSK

All Blacks unhappy about Christmas quarantine after Rugby Championship

‘There’s a strong bond between us’: the runners who’ve never missed a London Marathon