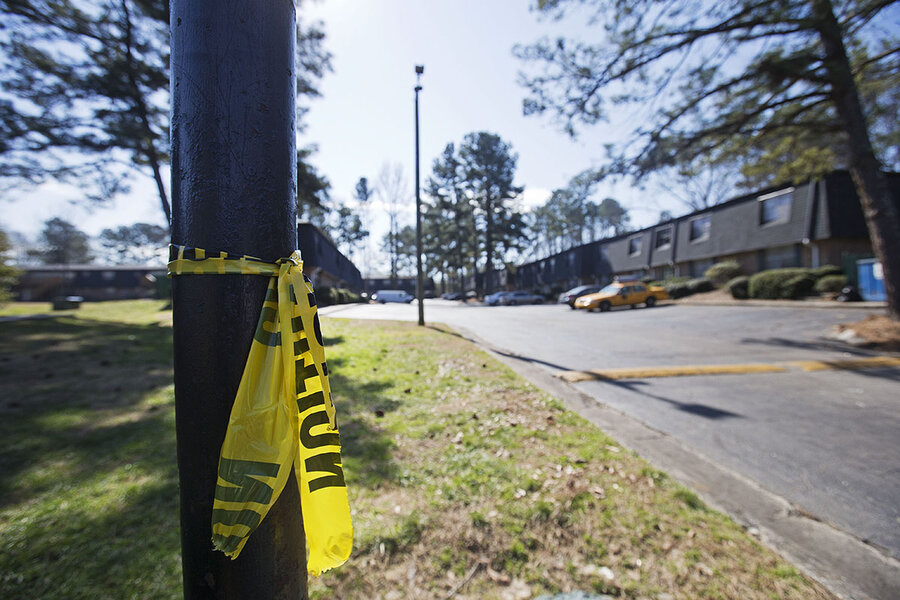 Ryan Frederick wakes up to furious barking from his dogs and the booming sound of splintered wood, like a broken tree. It’s night; he doesn’t know what time. All he knows is that he lives in a rough neighborhood in Chesapeake, Virginia, and that his house was broken into just days ago.

Mr. Frederick gets up, and before stepping gently into the hall, grabs his handgun. He isn’t a great shot. He doesn’t even exactly know what his gun is called. But he keeps it for home defense, like his grandfather always told him to.

The booming continues as he turns toward his front door. It’s broken. From the light of a small lamp he can see bluejeans and a quicksilver jacket, someone halfway in and reaching for the deadbolt.

He clicks the safety, and he fires.

Less than half an hour later, he lies face-down outside, handcuffed, and surrounded by squad cars.

“Do you know what you just did?” an officer asks.

“You just killed a police officer.”

Suddenly nauseous, Mr. Frederick learns that his house had been the target of a police raid. The officers went in that summer night in 2009 looking for a drug-dealing operation. They found only a small amount of marijuana, and that their intelligence had been incorrect. In the process, a detective lost his life, and Mr. Frederick lost almost 10 years of his to prison for involuntary manslaughter. All the result of one bad tip, one poorly aimed bullet, and a court sentence that many of Mr. Frederick’s neighbors thought was unjust.

“I still didn’t feel like it was real,” he remembers. “I was like, this can’t be happening. There is no way that I just shot a police officer. Police officers don’t come breaking in through a hole in your door.”

In fact, police officers sometimes do, executing legal but risky “no-knock” or “knock-and-announce” warrants. While there’s no clear data, American police carry out 40,000 to 50,000 no-knock raids each year by some estimates. As the Breonna Taylor case in Louisville shows, they can lead to the wrenching outcome in which both sides use force legally, and someone still dies.

These confrontations are rare, but in a country with expansive gun rights and police authority they occur each year. In their wake, they leave tragedies without clear heroes or villains – and the trauma caused by a real-time clash over Second and Fourth Amendment rights.

In the reckoning over invasive policing, in part caused by Ms. Taylor’s death, law enforcement and legislatures nationwide are now wondering whether gun rights can safely coexist with no-knock raids.

“If [police are] going in for something that’s not a life-or-death matter, then you really have to weigh out the pros and cons,” says Mr. Frederick. “How dangerous is this? Is the risk worth the reward?”

The rise of no-knock raids

The answer to that question from police departments has long been yes, says Radley Balko, author of “Rise of the Warrior Cop: The Militarization of America’s Police Forces.”

No-knock warrants first became legal during the war on drugs around 50 years ago. At that time, they were primarily used to catch violent criminals by surprise, and prevent an armed conflict before it could begin. In the years since, says Mr. Balko, the warrants have become less exclusive and are often used against low-level offenders or those with clean records – like Mr. Frederick.

Such a wide net can at times entrap innocent civilians in invasive raids, either from misinformation or poor intelligence. In essence, this is what happened to Ms. Taylor.

Police entered her home this March without announcing their presence, according to most witnesses. Fearing the worst, Ms. Taylor’s boyfriend, Kenneth Walker, opened fire, and police fired back. Ms. Taylor was killed, but no one was charged for her death in the grand jury’s rulings last week – though one officer was indicted with wanton endangerment for hitting the walls of neighboring apartments. The city of Louisville has agreed to a $12 million settlement with Ms. Taylor’s family and promised to institute reforms.

To many members of the public – and to the grand jury, which dropped the initial charges against him – Mr. Walker acted in reasonable self-defense.

“I think he did what a lot of people would have done,” says Dana McMahan, a Louisville resident.

There are legal barriers intended to prevent this kind of confrontation. When police apply for a search warrant, they must present probable cause to a magistrate or judge. To protect one’s right to privacy, regular search warrants require that police knock on the door and announce themselves before entering. In cases with potential for danger or the destruction of evidence, police can request no-knock permission.

But even without that permission, police can disregard the knock-and-announce rule if circumstances change during a raid. There’s also lowered incentive to follow protocol in the first place, since the Supreme Court ruled in Hudson v. Michigan in 2006 that evidence acquired in a botched raid is still admissible in court.

As police have gained authority to enter private homes, civilians have invested more in home protection.

In the last 30 years, largely due to marketing from the firearm industry, the primary reason for gun ownership has changed from sport to self-defense, says Daniel Webster, director of the Center for Gun Policy and Research at Johns Hopkins University.

Where the culture has moved, the law has followed. In 2008’s District of Columbia v. Heller, the Supreme Court affirmed the right of law-abiding citizens to keep a firearm in the house for the purposes of protection.

The ruling complements self-defense laws across the country, which allow citizens to use proportional force to protect themselves against violent crime, says Russell Covey, a professor of criminal law at Georgia State University.

In public, most states require citizens to retreat from violent confrontations if possible – though not in states with “stand your ground” laws. At home, says Professor Covey, citizens are exempt from that rule under a provision known as the castle doctrine.

This combination of more invasive police and more armed civilians has created a kind of crisis instability, with potential for small mistakes to be fatal.

“Once we’re at the point where the police are breaking down the door and you have an armed person inside that doesn’t know or can be reasonably mistaken about whether, in fact, it’s the police …  it’s too late,” says Darrell Miller, the Melvin G. Shimm professor of law at Duke University and author of “The Positive Second Amendment: Rights, Regulation, and the Future of Heller.”

It may seem like a legal paradox, says Professor Covey, but under the law it’s possible for both sides to reasonably believe they need to use force – especially during adrenaline-filled raids. Fight-or-flight responses can be especially dangerous when perceptions of threat are skewed by race, as they often seem to be when African Americans are involved, says Professor Miller.

“Either with a knock or without a knock [conducting a raid is] scary as hell,” says David Thomas, a former SWAT team officer and professor of forensic studies at Florida Gulf Coast University.

Even with intelligence, police never know exactly what’s on the other side of the door, and they have to enter with the idea that their target could be deadly, he says. They’re prepared to lose their life, says Mr. Thomas, even if by accident.

But it’s another thing for civilians, who don’t volunteer for the dangers of police work, to accept those costs.

“If the cops did a no-knock warrant on me – I have a mom, a dad, sisters, and brothers I have to look out for. So I’m going to fire,” says Shyler Andis, a Louisville resident whose sibling was killed by police. “I have a right to fire my weapon if I feel threatened or somebody barges in my house.”

Ms. Andis and many others marched through the city last week to protest the grand jury’s rulings. Following the outcry this summer over Ms. Taylor’s death, Louisville and other cities across the country banned no-knock warrants – though many don’t think that is enough.

“They can just force themselves into our homes, unannounced. It’s scary,” says DaPree Oldham, another Louisville resident. “There’s got to be a different approach.”

In such an environment of grievance and legal contradiction, the only way out is reform, says Eugene O’Donnell, a former NYPD officer and professor at John Jay College of Criminal Justice.

If legislatures don’t think no-knock warrants are appropriate, he says, they should ban them. The same goes for other police practices.

“If you conducted this raid and an innocent person died and the police were following policy and there’s nothing wrong with the policy and you’re not going to change the policy, then the only conclusion that we can draw from that is that innocent people dying is a perfectly acceptable outcome,” he says.

“I’d be in a totally different place”

For Mr. Frederick, the death of the detective that night 11 years ago has never been acceptable. (His case at the time drew widespread support from neighbors, who gathered on social media and left a “we support you, Ryan Frederick” sign on his yard, signed by dozens.)

Yet no matter the circumstances, he still killed a father, husband, and family member. After all, the officer was just doing his job.

After spending some time in Florida, he now works as a plumber outside Richmond, Virginia. He’s followed the Breonna Taylor case with interest, hoping it brings a change in police culture and accountability. Still, he says, it brings back bad memories.

Several times, Mr. Frederick’s considered reaching out to the detective’s family. Every time, he’s felt too nervous or too scared.

“I worry that would just stir up a negative reaction that doesn’t need to be,” he says.

But if they ever reached out, he thinks he’d be willing to talk. Maybe his time in prison gave them some closure. Maybe they, like him, have found a way to make peace with it all.

“Knowing what I know now, I wish I didn’t have the gun at all because I wouldn’t have had that option and that guy would be alive and I’d be in a totally different place in life,” he says.